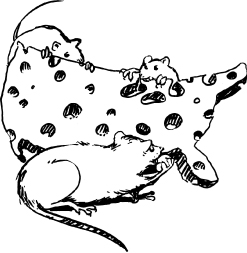 Rats in the cheese: a closer look at the bi-partisan budget deal

More important than what was put into the Murray-Ryan deal, is what was left out

In mid-December I went online to find out what the highly celebrated Murray-Ryan (or as the Republicans like to call it, the Ryan-Murray) bi-partisan budget deal involved.  I ended up spending hours day after day, locating bits and pieces; no one article told it all or even came close.  For brevity’s sake, neither can I, but I think this piece hits many of the important aspects.

The Murray-Ryan budget deal is said to be all about $83 billion. It puts $45 billion dollars back into the 2014 budget, which replaces just half of what the sequester cut.  For the 2015 budget, the “deal” returns $18 billion, or a quarter of the sequestration cuts. Money returned to the 2014 and 2015 budgets will be divided between the financially-bloated Pentagon and everything else. The rest of the $83 billion, about $20 billion, is to go directly toward reducing the deficit. In 2016, the sequester cuts are scheduled to come back full blast.

So you see, it gives the appearance of a reprieve.  Those in Congress are simply easing us into the idea of “sequestration,” which they also extended to 2023.  The hoopla about reaching “any deal at all” is just sleight of hand.  Think frog in a pot of water.  They’re letting us think they’ve turned down the flame, but we’re already cooked.

Who gets screwed to pay Paul?

New and recently-hired federal workers now have to contribute 1.3 percent more from their paychecks into their retirement funds. Military retirees under the age of 62 have had their COLAs reduced by 1 percentage point.  (They’re just another type of federal employee after all.)

Airline passengers will have to pay a few more dollars for security fees per ticket each way, but the Republicans can live with this little bit of taxation.  As Peter Ferrara of The American Spectator states, “It is not a tax increase worth stressing over at all.” He continues by describing the intensions of the flat tax advocacy group, Americans for Tax Reform, which plans to work toward eliminating the airline ticket tax entirely by simply “privatizing the Transportation Safety Administration.”

Oh, yeah, federal law will now only allow pay up to $487,000 in salary for any single federal contract employee, which is a reduction from $952,308.  Boohoo.  (Daring to show my working class roots, I have never been able to figure out what someone does to actually earn that much.  Even if one were to work 80 hour weeks without a vacation or holidays, that’s still $117 an hour!)

And for the few well-to-do, this little bill is a big plus.  Doctors and healthcare providers won a boost in Medicaid fees. The oil and gas companies also did well.  Screwing the environment, the Murray-Ryan budget deal “includes a provision for implementation of the 2012 US-Mexico Transboundary Hydrocarbons Agreement (ratified by Mexico in April 2012) that would allow oil and gas exploration in the western Gulf of Mexico.”  The U.S. Bureau of Ocean Energy Management estimates the deep-water area contains as much as 172 million barrels of oil and 304 billion cubic feet of natural gas.

Is it any surprise that at the same time the Murray-Ryan deal was being discussed in the U.S., the Associated Press reported the Mexican senate passed a bill December 12 that allows foreign oil companies to drill in Mexican territory for the first time since 1938.  The next step for the Mexican “energy package” is “approval by the legislatures of 17 of Mexico’s 31 states, because of its changes to the Mexican constitution.”

On a side note, National Geographic reported in December on a study, published in the journal Environmental Science & Technology, of bottle-nosed dolphins in an area “heavily impacted by the 2010 Deepwater Horizon oil spill.”  The researchers found that “many of the dolphins suffered from moderate to severe lung disease associated with oil contamination. Almost half had ‘a guarded or worse prognosis, and 17 percent were considered poor or grave, indicating they weren’t expected to live.’”  Predictably, BP criticized the findings, blaming the dolphin’s health, or lack of it, on “PCBs, DDT and pesticides, unusual cold stun events, and toxins from harmful algal blooms.”  According to the BP spokesman, dolphin mortality events happen all the time.  Hmm.

Conveniently excluded from the Murray-Ryan bill are the federal unemployment benefits for the long-term unemployed—Federal Emergency Unemployment Compensation Program (EUC). Last month, the program was providing for 1.3 million workers who were no longer covered by state unemployment programs.  The EUC was allowed to expire December 28, 2013.

That means, nationwide, potentially three million long-term unemployed workers will no longer have unemployment benefits.  Add to that all those workers who have given up or—because of the poor economy—have never been able to enter the job market in the first place to gain the right to unemployment benefits.  The Economic Policy Institute (EPI) calls those not included in the official unemployment rate “missing workers.”

After those long-term unemployed workers are thrown off the unemployment rolls, the “official” unemployment rate will drop 30%.  (See how well the economy is doing, Thomas Herndon, nitpicky kid at Amherst.  Austerity really does work!)  Of course, following this drop, there will be a slight bump from another 310,000 layoffs in 2014 resulting from the reduction in worker spending caused by the elimination the EUC program.  The good news for corporate spin doctors is the unemployment rate will drop back down in 26 weeks.

The Pentagon bulks up, again

Looking back to last year, the Pentagon received a budget of $613.9 billion, which included $88 billion in overseas contingency funds—mostly for the war in Afghanistan.  For this year the Pentagon’s budget received only $80 billion in contingency funds, but ended up with a 2014 budget totaling $630 billion.  (Scratch, scratch.)  And this to a federal agency that the Government Accounting Office describes as having  “significant financial and related business management systems and control weaknesses that have adversely affected DOD’s ability to control costs; ensure basic accountability; anticipate future costs and claims on the budget; measure performance; maintain funds control; prevent and detect fraud, waste and abuse; address pressing management issues; and prepare auditable financial statements…DOD is one of the few federal entities that cannot accurately account for its spending or assets.”

According to Laura Matthews of the International Business Times, the Pentagon has actually wanted to “trim the fat. It has proposed that Congress shutter, for example, some low-priority weapons programs such as the Global Hawk Block 30 drone and the C-27J Spartan cargo aircraft.  However, such requests have been denied.”

It reminds me of the dysfunctional family in the fictional Cinderella tale—biological children spoiled and the step-child horribly neglected.  Contrast the Pentagon to the food stamp program, which is another federal program purposely left out in the Murray-Ryan budget deal.  Jack Rasmus, in his Counterpunch article, states that besides the cuts to the program that happened in November of last year, “further reductions are being negotiated that will conclude by February 2014 and will likely reduce food stamp spending by $8-$10 billion over the two year period of the recent budget deal.” At a time when the US Department of Agriculture estimates that 49 million Americans (17.6 million U.S. households) experience food insecurity each year, this should be a scandal.  And needless to say—but I’ll say it anyway—the USDA estimate will certainly worsen with the elimination of long-term federal unemployment benefits.

By not including the elimination of long-term unemployment benefits ($25 billion) and the likely February reduction in the food stamp program ($8-10 billion), the Murray and Ryan budget deal hides the full impact on the American public “while pundits debate whether Republicans or Democrats won the negotiations.” As Katrina Vanden Heuvel, says in the Washington Post, “the real losers are the American people, on whose backs the deal was brokered. Never mind that it makes none of the crucial investments in education, infrastructure and research that will secure our future. This budget is a lousy deal for the millions of Americans still out of work, for the one in five children growing up in poverty, for the countless families still struggling to make ends meet.”

How does the future look?

Not so good.  Remember the Fiscal Cliff that was avoided a year ago?  It’s the one in which most of the Bush-era tax cuts for the rich, worth $4 trillion, were made permanent, but the federal long-term unemployment benefits were extended for only one year.  This year’s agreement reflects the same intentions.  John Cassidy in The New Yorker wrote, “the most stark reminder of how things have changed in Washington over the past few years is to look at the revised spending figure for discretionary spending in fiscal 2014. It’s $1.012 trillion. That’s slightly more than the Republican negotiators wanted, but it’s twenty-seven billion dollars less than Ryan proposed in his 2011 budget, which, at the time, was widely agreed to be so draconian it was unrealistic.”

Sylvia Smith is a long-time WIPster and Evergreen graduate, who would really appreciate someone coming forward with a background in economics to write about these crappy economic times.

Next:
It was another enjoyable screening at the Olympia Film Society…