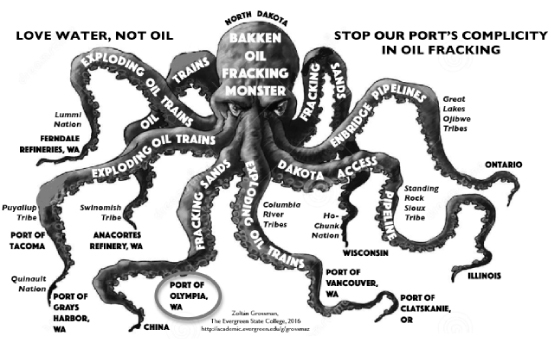 Olympia community groups drew about 300 people to an October 22 rally to oppose the Port of Olympia’s shipments of oil “fracking sands” to North Dakota. The material enables the extraction of Bakken oil. This is the oil destined for the Dakota Access Pipeline being blocked by the Standing Rock Sioux Tribe, and of the oil trains being opposed by Pacific Northwest tribes and their allies. The rally’s theme was “Love Water, Not Oil: No Oil Fracking Sands at Our Port; Stand with Standing Rock and Quinault.” Grace Ann Byrd (Nisqually) welcomed the crowd to the territory of the Medicine Creek Treaty tribes, and the crowd faced the Salish Sea in an honor song for the sacred water.

First, the Port of Olympia has been importing Chinese fracking sands, or ceramic «proppants,» used to prop open bedrock cracks in the fracking process, and loading it on trains to North Dakota.  More than 3,000 1.5-ton sacks of proppants await rail shipment this month. The fracking of Bakken oil shale threatens the safety of groundwater with chemical wastes; women’s safety with huge “man camps;” public safety with exploding Bakken oil trains; and the safety of our planet from methane releases and carbon pollution.

A rally organizer, former Port commissioner Sue Gunn said, “We need to stand with Native peoples and their efforts to protect water, for our planet to have a future for our children and grandchildren.” Participants in the 2006-07 port protests (against Stryker armored vehicle shipments to Iraq) were recognized on stage, with the implicit message that direct action is again an option as the port contemplates new military shipments, and is also becoming complicit in a new “oil war” against Native American nations.

Second, the Bakken oil is transported back into our local area on trains. Since 2013, federal regulators have had growing concern about the volatility of Bakken oil, which has sparked large train explosions. Northwest oil terminals have been proposed to receive the growing number of trains at coastal ports.

The Quinault Indian Nation has led opposition to the proposed Grays Harbor oil terminal, which threatens the coastal treaty fishery and shellfish with an oil tanker spill. About 44,000 people in Grays Harbor County live in the oil trains’ “blast zone,” including 11,000 children. Treaty rights leader Billy Frank Jr. wrote on the day of his passing of the Quinault stand, “oil and water don’t mix, and neither do oil and fish….It’s not a matter of whether spills will happen, it’s a matter of when.”

Quinault Indian Nation President Fawn Sharp, also President of the Affiliated Tribes of Northwest Indians, was among the rally speakers calling for Washington ports to be independent of “Big Oil,” and for the City of Hoquiam to not allow a new oil terminal to receive Bakken oil. Seattle community organizers Matt Remle (Standing Rock Lakota) and Millie Kennedy (Tsimshian) joined other drummers and singers from Quinault, Quileute, and other tribes to honor President Sharp, and sing the American Indian Movement Song. Tacoma resident Liz Satiacum similarly called on the Port of Tacoma to not allow a Liquified Natural Gas (LNG) facility, and invited the audience to attend a November 12 tribally-led march in downtown Tacoma.

Third, Olympia had already held six events to support the Standing Rock Sioux Tribe and the more than 300 other Native nations that oppose the Dakota Access Pipeline’s threat to the Missouri and Mississippi rivers.

In North Dakota, peaceful prayer vigils of the Native water protectors have been met with heavily armed police and private security, with militarized vehicles, helicopters, tear gas, and attack dogs. Olympia residents Marles Blackbird (Hunkpapa Lakota) and Lydia Drescher (Tongva) shared experiences in and communications from Standing Rock, and highlighted the spiritual nature of the struggle centered on the concept of “Mni Wiconi” (Water is Life).

Standing Rock is only the latest of the North American struggles that have taken on Big Oil. Powerful alliances led by Native nations, together with farmers, ranchers, fishers, and environmentalists, have defeated the Keystone XL pipeline, and several oil and coal terminals in the Pacific Northwest (most recently the Shell proposal in Anacortes, where the trains would go through the Swinomish Reservation).

We in the Northwest are not powerless in this fight. We are the chokepoint, the “thin green line” that Big Oil has to go through to reach the global market.

We do not need 10 commandments

Just this one truth

There are no divisions we are one

One mind one body one soul

One life one planet just one

If you do not
understand  I
cannot
tell you why

It is the ground
under my feet

And my eye in the skies…

For background information on Bakken oil fracking and the Port of Olympia, see
https://olympiapfr.wordpress.com/

To get involved in possible direct actions, contact Olympia Confronting the Climate Crisis at olyccc@earthlink.net.

For information on Standing Rock, see www.standingrock.org or www.sacredstonecamp.org, and on Quinault’s stand against the Grays Harbor oil terminal, see www.facebook.com/QINDefense

Zoltán Grossman is a member of the faculty in Geography and Native Studies at The Evergreen State College: http://academic.evergreen.edu/g/grossmaz

Next:
Boudicca Walsh The storm that hit Olympia over the…