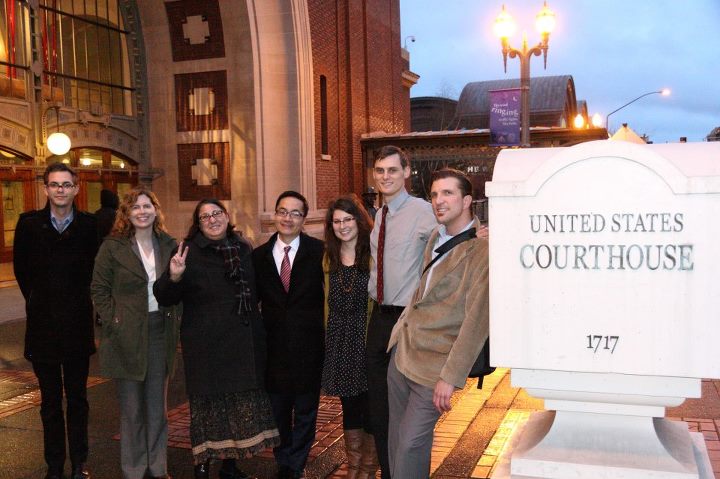 TACOMA, WA –The “Backpack 6” trial got underway on Monday January 7th. The trial is formally known as McCarthy et al. v. Barrett et al.Six plaintiffs have been working with American Civil Liberties Union (ACLU) Attorneys and para-legal staff, and others, attorneys with the Seattle Offices of Dorsey and Whitney, pro-bono. In collaboration, they have brought a case to sue the City of Tacoma for alleged civil rights violations. Alleged infringements include first amendment rights to protest: to see and be seen, to speak and be heard. They also allege infringement of 4th amendment rights and protections against unreasonable search and seizure.

Background short story: way back in March 2007 the plaintiffs were part of protests against military shipments out of the present day JBLM from the Port of Tacoma. During the protests they were arrested for wearing backpacks, and they decided to challenge the City of Tacoma by bringing this lawsuit.

The trial is happening in the courtroom of Judge Ronald B. Leighton at the US Courthouse in Tacoma, 1717 Pacific Ave. It is expected to run for about 10 days. Judge Leighton has other duties on Fridays. Trial will occur Monday through Thursday, so the trial may last until the 22nd or 23rd of the month.

Representing the City of Tacoma was Attorney Jean Holman. Representing the protesters were Attorneys Theresa Wang, and Bob Mahler and Nathan Alexander pro-bono from the Seattle offices of the Dorsey and Whitney Law Firm.

The morning began with jury selection. 8 jurors were chosen out of a pool of 33 potential jurors. Judge Leighton asked about 33 questions, and then left 10 minutes to each counsel to ask other questions. Seattle Attorney Bob Mahler handled jury selection for the Plaintiffs.

By a few minutes after the 12 o’clock Noon hour, jury selection had been completed. After recess, the afternoon session resumed at 1:30 PM and consisted of opening arguments, and the first plaintiff to testify.

ACLU Attorney Theresa Wang provided opening oration on behalf of the plaintiffs. Wang spoke of how the the actions by the Tacoma Police Department (TPD) had a chilling effect on the protests, and on the protesters, and those and other police actions served to scare protesters, and escalate anger and tensions. Wang argued that the civil rights of the plaintiffs were violated by the actions of the police at the protests, and spoke in depth about specific inconsistencies practiced by the city, for example, after McCarthy was arrested for wearing a backpack, the anti-backpack policy broke down for the night, and backpacks were then allowed into the protest “zone.” Wang also spoke in general terms about civil rights and protections for free speech and the right to be secure in ones person.

Wang explained that the protest zone was far away from where people could park. A couple days into the multi-day protest the City had begun to force people to park far away, and that the backpacks had become necessary for protestors to carry food and water, and make trips to the protest reasonable.

City of Tacoma Attorney Jean Holman argued the need for balance, and it appeared that the word, “Balance,” capitalized, was on the monitors in view of the jurors throughout the City’s opening argument. Holman argued that the backpack policy was for safety.

The first plaintiff to take the stand and testify was Leah Coakley. Leah was interviewed by attorney Nathan Alexander talked about being involved with Students for a Democratic Society, (SDS) at the University of Puget Sound, and about the personal significance of protesting against the war, and for the troops.

Leah explained to the jury how the war was wrought by deception, and that opposing the war was the best way to truly support the troops, to prevent them from being killed and otherwise suffering in a war that was unnecessary, and unrelated to legitimate national security and defensive prerogative.

WIP plans to provide more coverage of this story, so please stay tuned.

The American Civil Liberties Union (ACLU) has been providing support for this cause, and also has information on their website,http://aclu-wa.org/cases/mccarthy-v-barrett including a pdf of the complaint that has been filed.

Next:
A military career was once viewed as an honorable path…