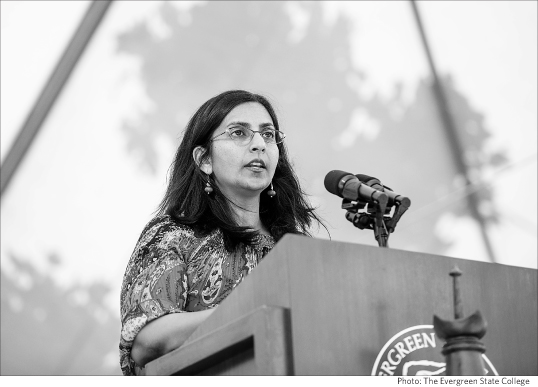 Plastic, underemployment, and socialism: a review of The Evergreen State College commencement ceremonies, 2015

A festive event (on multiple occasions)

During Evergreen’s commencement ceremonies this year, I happened to be seated next to a young Italian mother, her two kids and her South-American husband. It was her first time observing an American college graduation and she was surprised by the festive tone of the event manifested in the funky music played by the band, the multiple food stands touting hot-dogs, lemonade, or healthier vegan edible merchandise, as well as the casual irreverence of the sartorial statements of some of the graduates. Not willing to engage too much in a cultural studies type of conversation I offered a blanket evasive statement: “Hai ragione, ma questa é l’America.” (You are right, but this is the United States).

Of course she knew our geographic location and the cultural implications of the territory; nonetheless, she continued to point out the differences between the unctuous formality, or in some cases complete lack of eventfulness (some universities just mail your degree on completion) of European or Latin American institutions versus the casual cheerfulness we were witnessing at Evergreen’s Red Square. But most importantly, besides the celebratory elements of American graduations, our European observer was shocked by their frequency. Just the previous week she had attended her own daughter’s kindergarten graduation ceremonies, as well as another graduation ceremony for a junior high class in Seattle.

Commencement ceremonies from kindergarten to advanced degrees do seem to occur in the United States at a more frequent rate and at shorter academic intervals than in other countries around the world. Perhaps this cultural need for continuous celebration—or ‘acts of nurturing’—as noted by the New York Times critic Heather Havrilesky discussing Julie Lithcott-Haimes’ “How to Raise and Adult: Break Free of the Overparenting Trap and Prepare your Kid for Success”, is due to the tremendous insecurity of “global capitalist culture, with its unbending fixation on prosperity and the future”. Americans, according Havrilesky, seem to understand success in life as one continuous chain of tangible accomplishments. If these events do not happen, then life will culminate in failure. Consequently, we do celebrate graduations in America as often as we can, as if each ceremonial act, independently of the age of the student or academic complexity of the degree, will provide us some reassurance that a new accomplishment is in place, paving the way to financial prosperity and therefore the avoidance of what is perceived as an existential catastrophe. This delusion is aggravated by an educational system that particularly from grades K-12 presents no major difficulties for continuous promotion to the next grade regardless of academic qualifications.

Plastics and the end of poverty

In 1967, the year the iconic American movie The Graduate was filmed, Lyndon Baines Johnson, then president of the Unites States, noticed in his Economic Report to Congress that “in purely material terms, most Americans are better off than ever before”, and in the section called “Helping the Disadvantaged” he pointed out that “The United States is the first nation in the history of the world wealthy enough to end poverty within its borders”. Needless to say, within the current optic of massive inequality in the nation, neither of those two statements holds true. 98% of Americans are in a precarious condition especially when compared with the wealthy 2%. Although it is true that the Unites States remains wealthy enough to end poverty within its borders (and beyond), poverty has not ended but continues to grow as does economic and social inequality in the nation.

The optimism of American capitalism during the Johnson administration is pathetically reflected in one of the scenes of The Graduate when the character (Benjamin) played by Dustin Hoffman, after finishing college, is given a welcome home/graduation party by his upper middle class parents. Mr. McGuire, a close family friend and business partner, offers the perplexed Benjamin the following unsolicited advice about the future post- graduation:

Mr. McGuire: I just want to say one word to you. Just one word.

Mr. McGuire: Are you listening?

Benjamin: Yes, I am.

Benjamin: Exactly what do you mean?

If plastics symbolized the favorite child of technology at the time, and also the materialist values transmitted from one senior member of a class to an upcoming junior, then, in as a point of reference, what where the values transmitted by the Evergreen Authorities and keynote speaker to the large group of Evergreen Graduates during this year’s commencement ceremonies? What ideological messages were permeating their speeches?

The Evergreen College as reality

It is safe to assume, although there may be significant exceptions, that the latest cohort of Evergreen Graduates is less perplexed and disoriented about the future than Benjamin was in 1967; if anything, first due to their economic background (68 percent of students during the academic year 2013-2014 received some form of financial aid in the form of loans, scholarships, and grants), added to the factor that a large number of students belong to the Evening Program (near between 400 and 500 students who work during the day and/or have family responsibilities) and therefore have eaten of a different tree of knowledge; and finally, the academic experiences like the ones described by professor Lawrence Mosqueda in this issue. All these place Evergreen students in a more advantageous position to understand social reality and elucidate their future—to the extent that the future allows itself to be elucidated.

Parallel to this, nationwide, those who graduated from college in the last decade or so lack the ‘cultural optimism’ of previous generations regarding the possibilities of getting hired in their area of expertise and being paid accordingly. According to the Wall Street Journal, the Class of 2014 has the ‘discouraging distinction’’ of being the “most indebted class ever”, having to pay back an average of $35,000. This fact acquires a deeper and gloomy dimension when the same journal reports that currently over 70% of students nation wide are taking on debt in order to afford the costs of higher education. Overall, student debt has increased by 40% when compared to graduates in 2005, while the average income of graduates compared with the same group has fallen by 5 percent. If there is any perplexity and disorientation among our new graduates it may be about how this democracy—‘wealthy enough to end poverty within its borders’—does very little to solve the entwined problems of student debt and under-employment.

There is a tendency to ‘idealize’ higher education institutions as if they exist beyond the ‘good and evil’ of the rest of society. Quite often they are described as possessing ‘unique’ attributes that set them apart. In fact, each higher education institution is unique by definition—just as is the case for individuals. Yet it is more important not to focus on the real (or imaginary) unique attributes of colleges and universities, but to try to understand them as part of the vast network of ideological apparatuses of the state (and in this sense responsible for reproducing the hegemonic ideology of society), susceptible to conflict, struggle, and social resistance. In other words, educational institutions represent the plurality of situations present in society and are shaped by human action. Within educational institutions, the critical demarcation lies between those who consciously or unconsciously perpetuate the dominant ideology and those willing to challenge it. What this means at present is that students, faculty and staff adopt particular positions with respect to neo-liberal cultural politics in higher education, subordinating themselves to or opposing the logic of submission and consent favored by the system.

Kshama Sawant, socialism, and the austere silhouette of life

It is not accidental that Kshama Sawant was the guest speaker at Evergreen’s commencement ceremony. Her presence represented the tendencies of social resistance and challenge to ideological submission actually present in a certain number of students at Evergreen. Ironically, the speeches of both the president (Thomas L. Purce) and the provost (Michael Zimmerman) were closer to irrelevancy, the former acting as a perky MC with pointless cheerfulness, and the latter as a disaffected cultural producer interested solely in counting degrees.

It is worth mentioning that this is not the first time that Evergreen has invited guests identified with radical politics. (Last year the guest speaker was environmental activist Winona Laduke.) Besides being a member of the Seattle City Council, Kshama Sawant is a member of Socialist Alternative, a national organization fighting in work places, communities, and campuses against exploitation and injustice. She was a former computer software engineer in India and earned a Ph.D. in economics after immigrating to the United States. According to the official Evergreen program “she accepts only the average worker’s salary, and donates the rest of her six figure salary to building a social justice movement.”

As expected, Kshama Sawant’s message to the new graduates did not portray the future nor the present of American society as a pastel colored existential canvas in which having a degree is somehow a guarantee of success, or a passport to the safe arrival at the soporific American dream.   Hers was a sobering message that described America as a nation marked by racism, social asymmetry, and economic inequality. She illustrated this last point by indicating that the average CEO makes $7,000 an hour compared to the national average minimum wage for workers which fluctuates between $7.25 and $8.25 dollars an hour. Her message to the graduates was also posed in the form of a question and a call to action: What would you do to change the world? Kshama Sawant highlighted among other things the importance of getting involved in the Black Lives Matter Movement, with Climate Change actions, against the de-humanization of the poor and minorities, and the struggle for $15 dollars minimum wage.

Sawant was also critical of romantic ineffectual solutions for change such as the political futility of shopping choices or writing letters to your congressperson. For Kshama Sawant the difficult social conditions (the austere silhouette of life) currently experienced by most Americans under the actual circumstances of capitalism can only be changed by building a successful movement. If ‘plastics’ was the code message given to the upper middle class graduates of 1967, socialism and building the party of the 99% was the message delivered to the Evergreen Class of 2015.

Next:
Constitutional law looks fine on paper... I was attacked by…