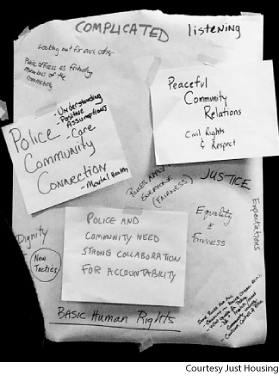 On November 14, at First Christian Church, organizers, activists and community members met to attend the People’s Budget Forum, an event put on by Olympia City Councilmember Clark Gilman; he has a background as a union organizer and representative, and prior to his appointment to his City Council seat, he was a member of the Bicycle & Pedestrian Advisory Committee.

And what was the result of all this discussion and verbiage selection? That these Guiding Principles would purportedly be a part of future budget meetings. With that acknowledgement of the titular purpose that had brought them all there, a bona fide ukulele was produced and “Somewhere Over the Rainbow” was played as a “Kum-ba-yah” moment ensued.

So how did the participants feel? Of those I interviewed: some were confused, some respondents were disappointed. Attendees actually spoke out at the Forum, restating a message that Just Housing has been presenting to the City Council since the Storm that Wasn’t back in October: there is urgent need, solutions are needed now. They voiced frustration at the inaction and irrelevance of the forum: for a summit titled “The People’s Budget Forum,” it had next to nil discussion nor transparency in the budget; no substantive numbers nor projects were enumerated nor presented. And how would these Guiding Principles be a part of future budgets? What is the monetary worth of Human Rights? How much is spent on police accountability, and how will that money be used to ensure that accountability? And how much does Dignity cost?

Here are some numbers referenced at our last City Council meeting by Chris van Daalen: $299,000 for a private company to clean up homeless encampments in the woods. This egregious misexpenditure is not ameliorated nor improved by the draconian legalist excuse of this money being subjectively apportioned but not yet raised. This money is nearly three times the cost of Dignity Village that was built in Eugene, Oregon; and with that, seeing as how Dignity Village houses an estimated 30-60 people, we could easily double or maybe triple the number of people served. Combine that with the 40 or so shelter beds in Olympia, we could, in one fell swoop, practically end homelessness in our city. Why does the city not make a proposal to seek that much funding for a project that would solve homelessness, not just treat the symptoms of it?

Or, speaking of rights (equal access under the law) and Dignity, we could use that money to not only keep the public bathrooms open, we could build a couple more—maybe rebuild and reopen the community showers that used to be open by the pier downtown. Currently, there is not a decent bathroom where people can relieve themselves at night. Have any of our Councilmembers had to use either of the 24/7 porta-potties by the artesian well or the Transit Center? Those plastic, piss-and-shit-stained ground zeroes for the next cholera epidemic, so ludicrously touted as such in retort to Ce Ce Coates’ well-worn and loved attestation about the bathroom situation.

For those who have yet to see her speak (it’s online) or revel in the resonant thunk of her Piss Pot being put upon the dais (it’s washed!) go and check it out now: a staunch middle-aged woman with graying pigtails standing proud against the derisive conditions the City has yet to alleviate. Her demand is simple: make the public bathrooms in downtown areas open 24/7. This would not increase the labor cost for maintaining nor guarding them: these bathrooms are visited every 12 hours, for cleaning and, currently, locking/unlocking them. If I had a nickel for every time I heard of a City attendant lording their keys over a civilian who just really needs to pee, I could build and maintain my own damn 24/7 bathroom.

Notice here that I don’t put quotes over the label of these brick, mortar, and indoor plumbing toilet facilities: they are legitimate bathrooms. The ones referred to by Councilmembers are not hard to find: just inhale through your nostrils stiffly and you can’t miss them. Now, I’m not too proud to use a porta-potty, but I sure as hell don’t find it dignifying. These are large plastic and rubber boxes that offer nothing to clean your hands but sanitizer—assuming it was refilled in a timely fashion.

Think of this: a cold, moonless winter night, and the thin walls of your enclosement offer no insulation. Hope you brought a flashlight, because it’s not lit on the inside. And there you are, having freezing diarrhea in the dark, and groping for a squeeze dispenser that won’t wash the feces off your hands. Where is the nearest hand sink? Nowhere near you, pal.

As much as I don’t want to be too hard on Councilmember Clark Gilman, I must say that this forum is evidence of the tone-deaf nature of the establishment in response to the underclasses’ issues: we discuss urgency and the need for immediate action to save lives and the response is a summit on the distillation of ideas into the smaller, vaguer parts. This is the disparity between our methods of change, and while I wish that words and calm discussion alone were enough to actualize the resolution of the housing and public physical and mental health crises that our homeless citizens face on a daily basis, it has been six weeks and I have yet (as of the time of this article’s writing) to see an actual change towards the needs to Legalize Survival: there has been no injunction or police action to decriminalize homeless, there has been no inch of City property designated or donated to homeless advocacy movements nor faith-based groups, and no single, maintained and guarded bathroom has been opened for 24/7 use.

What can we, as citizens, neighbors and kin under one roof, say about gestures that bring no change to the people we see, know and love who are suffering, nay, dying in the streets—the veterans, disabled, elderly, vulnerable adults who have no humane refuge to go to? And what will we as voters do if our Councilmembers continue to refuse to produce real, tangible change, nor hold City Manager Steve Hall responsible for his continuing neglect of the Council’s stated interests in humanity?

We remember who decided to not open a single building to shelter people in the storm in October, Steve Hall. And while we cannot vote you out of your protected appointment, we will be holding City Councilmembers accountable who have yet to speak in response to the concerns raised by their citizens. Clark Gilman is trying, misguidedly, but trying. Jessica Bateman and Jim Cooper have been strong voices to push for Progressive change, and Mayor Cheryl Selby and Jeannine Roe were also voices in support of shelter, and voted with the majority of the Council to fund the Warming Center: but as before, these are all solutions that are either temporary, or only peripheral, if they do anything at all.
I hope that in future People’s Budget Forums, that the actual Budget will be reviewed, that the People will actually be able to have some direct say in the procedure, and that real tangible change will be made to save lives.

Alden Marsen is an Evergreen dropout and pithy critic of local government.

Next:
(This article is excerpted from the author’s forthcoming book Unlikely…