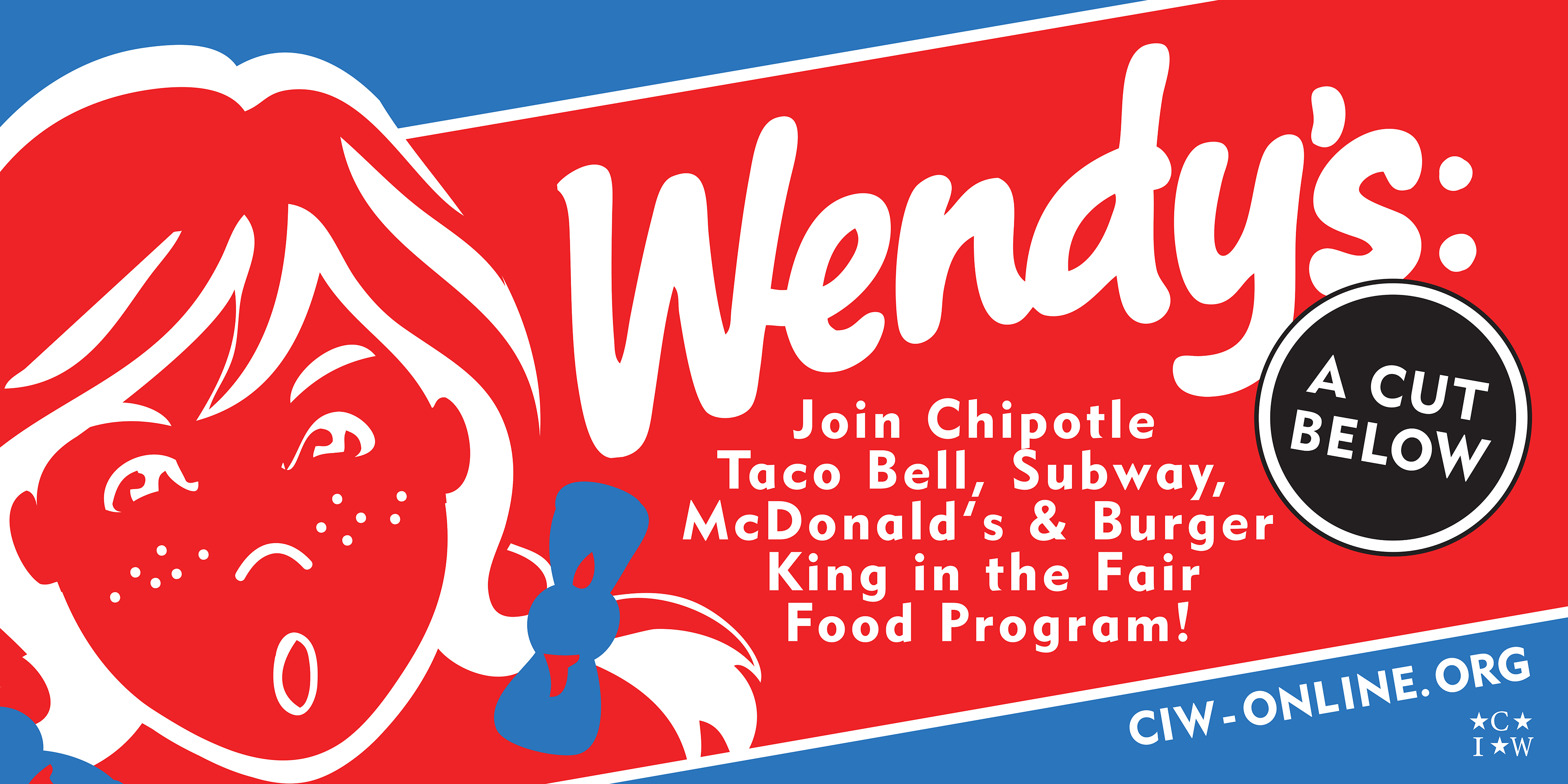 Why were labor activists on the street at Lakefair, Saturday July 21, asking fairgoers to donate a penny to the Wendy’s fast food chain? Wendy’s is the largest fast food outlet refusing to pay an extra cent per pound for tomatoes. That one cent would ensure that farmworkers in Florida are paid at least the minimum wage, and treated with minimal fairness. The pennies collected were ‘charity’ for Wendy’s, to shame it into spending that extra cent per pound and join the Fair Food Program created by the tomato pickers union, the Coalition of Immokalee Workers (CIW). That extra cent would cost Wendy’s less than one penny per meal sold.
Myself, Rob Whitlock, Ryan Harris, Nathan Mountain and Allie Van Nostran scattered throughout Lakefair, talking to people about conditions in the tomato fields of Florida. These include wage theft, sub-minimum wage pay, and working conditions so extreme that some growers were arrested on forced-labor (slavery) charges as recently as 2010. Sexual harassment of farmworker women is common, often escalating to unprosecuted rape as the June 28 Frontline episode “Rape in the Fields” documented.
Fairgoers strolled around, enjoying booths and rides before the Lakefair parade was due to start. But many were happy to stop and be filmed donating pennies to shame Wendy’s into doing the right thing.
One man insisted on donating twice, “I drive a truck for a living, and lot’s of times we don’t get paid what we are worth either.” Another fairgoer insisted “Everybody should be paid a living wage”. A 22-year-old woman wearing an Evergreen College t-shirt said “I’d pay a penny more per burger so farmworkers could be treated better. Wendy’s can afford one cent.” John, staff at a non-profit booth, also insisted on giving more than once. “Come on Wendy’s, give that communion penny. You can afford it,” he said. “And this penny is for Dave because I miss him. And this one is just because—Wendy’s, you can do better.”
Donors included 3-year-old girls and 91-year-old women, cashiers at the Dollar Tree and Evergreen professors, people wearing suits and ties, people dressed in cutoffs and t-shirts, some with conservative personal styles, and some with piercings and tattoos. All want Wendy’s to join the Fair Food Program.
The Fair Food Program is important because it increases pay, stops wage theft, and promotes dignity for farmworkers. It provides a third party grievance procedure and monitoring of grower compliance.
Wendy’s response has been “[W]e pay a premium to our tomato suppliers in Florida, and expect them to take care of their employees. All of our Florida tomato suppliers participate in the Fair Food Program.”
This unverified, unmonitored, and unquantified “premium” lacks any mechanism to pass it along to farmworkers. Wendy’s claim to buy tomatoes only from Fair Food Program participants is meaningless. Wendy’s, unlike its competitors, neither tells nor has to tell who supplies its tomatoes. Nor has Wendy’s committed to suspend purchases from growers violating Program treatment standards. Wendy’s non-participation in the Fair Food Program undercuts the transparency and enforcement that give it teeth.
Please call Wendy’s at (614) 764-3100, and leave a polite message for CEO Emil J. Brolick that Wendy’s should join the Fair Food Program. Please note that presently the CIW is NOT calling on consumers to boycott Wendy’s.
More information is available at the Coalition of Immokalee Workers website: ciw-online.org. The video can be found by a YouTube search on “Pennies for Wendy’s”.

Gar W. Lipow is an activist and independent journalist. His published works include Solving the Climate Crisis Through Social Change (Praeger, 2012), Cooling A Fevered Planet (Self, 2012) and extensive writing in Grist, and in other journals and magazines on the political economy of climate change. His public email is gLipow@gmail.com.

Next:
UPDATE: The legal proceedings have ended. More information has been…