Our youth call us to act on the Climate Emergency

Over 2,000 Olympians, students, and other local Washingtonians gathered on the steps of the State Capitol last month to stand united facing the threat of climate change. Those attending the Global Climate Strike on September 20 were responding to a challenge issued by a young Sw 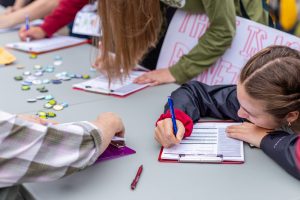 edish woman named Greta Thunberg who protested in front of parliament in the name of the climate change crisis. Since last year, her message has spread across the world culminating in rallies like this one, with supporters gathered to address climate change.

Elyanna Calle, a local high school student influenced by Thunberg, organized the strike in Olympia. Urgency was at the heart of Calle’s words. To prevent global temperatures from rising 1.5 degrees Celsius, she explained, carbon emissions must reach net zero by 2050. Reductions need to begin in earnest well before 2030, however. Thus, says Calle, an eleven-year countdown has sprung into motion.

Kaylee Shen, president of Olympia High School’s Climate Action Club, made clear demands during the event. First, climate change needs to be called out for what it is: a crisis. Major legislation needs to be enacted to further mitigate carbon emissio 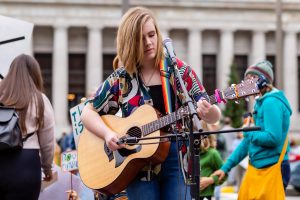 ns and a more sustainable lifestyle was strongly encouraged. Going vegan, eliminating plastics, and using reusable containers were just a few of the suggestions. Shen also noted that OHS is striving to reach net zero waste by 2040.

Shen advocated strongly that people register to vote. Mitigating climate change will need to be a joint effort between the next generation and those who can vote now. “Because doing something is always better than doing nothing,” she concluded.

Rejoining the Paris Climate Accord was another focus of the protest. Other local Olympians voiced their concern regarding the isolati 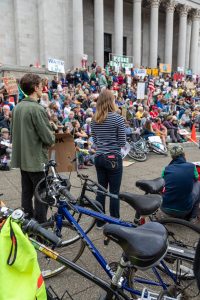 onist reputation the U.S has earned around the world.

Three climate change activist groups showed their support during the protest. The Sunrise Movement, a growing group of young people dedicated to making climate change an urgent priority across America and putting a stop to the influence of the fossil fuel industry, the Thurston Climate Action Team, who collaborate with others in the community to find the most effective ways to reduce carbon emissions, and The Climate Reality Project, whose mission is to “catalyze a global solution to the climate crisis by making urgent action a necessity across every level of society.”

Will and Olivia, two recent graduates, echoed similar concerns. “There needs to be more accountability over larger corporations and what they say. if you haven’t stayed up to date about what’s happening, really begin to pay attention to multiple sources. Get a diversified understanding of what is happening. Watch closely to what is being done to the environment and who is doing it.”

Baxter Lee is a recent graduate from the Evergreen State College.

This is all wrong. I shouldn’t be up here. I should be back in school on the other side of the ocean. Yet you all come to us young people for hope. How dare you!

You have stolen my dreams and my childhood with your empty words. And yet I’m one of the lucky ones. People are suffering. People are dying. Entire ecosystems are collapsing. We are in the beginning of a mass extinction, and all you can talk about is money and fairy tales of eternal economic growth. How dare you!”