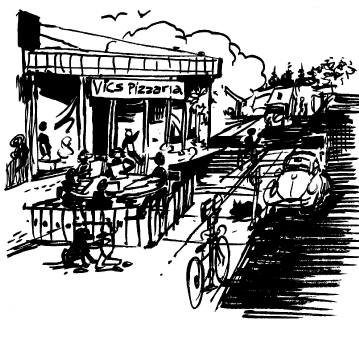 Olympia’s Westside–The community in which it sits

Westside neighbors have been fighting the city’s policy of promoting more cars for its Westside “tax farm” for at least 25 years.  Much, but not all, of the fight has centered on “development” around the dangerous intersection of Harrison and Division.

Now we are on the verge of another major victory with the possibility of a community-oriented park on the Southeast corner of Harrison and Division.

But this privately owned, proposed park does not come out of nowhere. It’s part of a long history of Westside community organizing for a safe and resilient neighborhood.

Does anyone remember the Friends of the Westside Center in the early 90s and Ms. Diane Hogland?  By the time Diane had mobilized the Westside and made us aware of Harmen Verbrugge’s plan to turn the Westside Center into a mini Westfield Maul we had already lost many locally-owned businesses to Harmen’s rent increases. He drove these businesses out of our neighborhood:  Olympic Drug, At Home with Books, Graphia Print shop, Dirty Dave’s Pizza, Rainy Day Records and the Asterisk Coffee House. Later we would lose Peterson’s Shoprite, but we did stop Harmen from replacing it with an Albertsons

Thanks to Diane Hogland’s efforts we still have a neighborhood center with locally-owned businesses like Vic’s and Apollo’s that know this history and support Westside community struggles.

Anyone know or remember Clark Gilman, a neighbor still living on Bush Street NW?
When we had to go up against Harmen’s lawyers in an administrative law hearing, Clark did something no City planner had bother to do.  Harmen had submitted a plan showing there were plenty of parking spaces to replace those lost to the Jack in the Box.  Clark took this plan and, lo and behold, found out Harmen was putting parking places on the north end of the buildings where all the delivery trucks unload!

We won that fight and now there is a South Sound Bank there, even though its President and CEO, Dan Yerrington, doesn’t know why and won’t even open up his front door to a community who let him build there.

Anyone remember Steve Hughes and the May Day Park of 2001?

Steve was a Westside native and organizer who knew that May Day Celebrations were in honor of the American workers’ fight for the eight-hour day.  He organized several Olympia May Day demonstrations and in 2001 the demonstrators stopped at the long vacant lot at the SE corner of Harrison and Division. While surrounded by riot police, Westside neighbors raked the ground, created walk ways and planted trees and flowers.
The notion of a park, rather than a sales tax car magnet, was too much for the city of Olympia. After the riot police dispersed the parksters, the city came with its bulldozers and returned Mr. Narozonick’s lot to its vacant self.

LeAnne lives on Cushing NW between 4th Avenue and Harrison in a beautiful historic home with a wonderful backyard.  She and her neighbors live just across the alley from the vacant lot. They also have rights to the alley that runs between their homes and the vacant lot. Whatever happens to that vacant lot owes a great deal to LeAnne Kirkwood and her Cushing Street neighbors.

Do you know about Bob Shirley and the 7-Eleven campaign of 2010?

Bob is an Olympia resident and attorney who does pro bono legal work for community organizations and successfully advised the Westside’s Decatur Raiders who led the fight to stop the city approved 7-Eleven scheduled to be built on Mr. Narozonick’s vacant lot.
It took two years of hard, on the ground, strategic organizing and fund-raising by over 60 dedicated Westside neighbors and locally owned businesses to force the City of Olympia staff to live up to the vision of the Comprehensive Plan and to abide by the law, but the neighbors succeeded.

Months after the Westside neighbors defeated the City of Olympia in Superior Court in April 2012, the agreement between Mr. Narozonick and the Vancouver promoter of the Seven Eleven, Michael A. Jenkins, was ending.

On that ending date, Alicia Elliott, one of the sixty people who had helped finance the campaign to stop the 7-Eleven,  offered to buy the vacant lot from Mr. Narozonick and he agreed. The lot is now owned by the West Central Park Project, LLC, created in October 2012, with Alicia Elliott as Manager and Jon Cushman, a local attorney, as registered agent.

In June, 2013, Alicia created West Central Park, a non-profit cor-poration.  Alicia along with Olympia residents Paul Ingram and Dennis Lyon are its listed Directors.  Chad Law is its registered agent.

As stated in its corporate papers, “The mission of the West Central Park is to create a public, open, green space that can serve the recreational, educational, artistic and musical needs of the community in which it sits.”

The “community in which it sits” has a long history of organizing to preserve the residential and small business character of the Westside.  This community also knows parks, having created numerous parklets on both sides of Harrison. It has created bike trails, walking paths, and murals. It also knows the City of Olympia, its planning department and the pedestrian-oriented vision of the Comprehensive plan the city is supposed to follow.

On Tuesday evening, the 17th of September, the Park’s Board of Directors sponsored a community forum at Gloria Dei so the Westside community would have an opportunity to interact directly with the Park organizers.   The Decatur Raiders distributed close to 500 Park brochures to households in the SW neighborhood to let people know about this meeting.

Dan Leahy is a Westside resident and proud member of the Decatur Raiders.

Next:
Tiny economic gains from TPP will be dwarfed by increased…