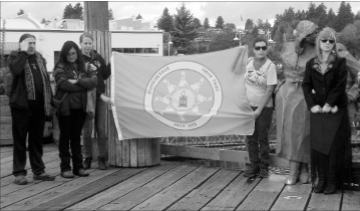 At the southernmost tip of Puget Sound, the direct descendent and grandson of Sitting Bull, Benjamin Sitting Bull, Ogalla Lakota Sioux, spoke to Olympians on Saturday afternoon in downtown Olympia.

About 65 people gathered in solidarity with the water protectors blocking the Dakota Access Pipeline route at Standing Rock, North Dakota.

A sea lion in Budd Inlet approached Percival Landing beneath The Kiss statue near Sitting Bull, also wanting to listen.

Sitting Bull lives in Olympia, and said that he is choosing to raise his two year old daughter, Josephine, here because it is safe and warm. As she sat on a little scooter wearing a monarch butterfly costume, he acknowledged the wide range of emotions community members are feeling about the tense situation at Standing Rock.

“….Those feelings are valid…. That’s why we’re standing up as indigenous people, because we’re called upon. Our grandparents that are no longer living – our elders – have tapped on us and come to us in our dreams and are saying, ‘Get up and say something to the people around you. These songs and these ways that are given to you – put them out in the public right now….’”

As her father spoke, Josephine listened. When he began singing a prayer song, she closed her eyes, put her head back, and started bouncing to the beat of his drum.

Although the protest in Standing Rock continues to be ignored by corporate media, a wide variety of social media sources and Native news sites feed constant, live streaming videos and disturbing updates. Reports of police brutality, including reports of intrusive bodily searches of the protesters, called water protectors, are rising.

The proposed 1,172 mile long pipeline would move 470,000 barrels of domestic crude oil a day through four states and run through the Standing Rock Sioux reservation, threatening water, the environment, and Native American burial and prayer sites.

Law enforcement has escalated their response and have arrested at least 141 protesters. Efforts by journalists to document what is happening is being hampered and criminalized.

A local prosecutor had charged Amy Goodman of Democracy Now! with rioting after her crew filmed an assault on protesters on September 3. A judge threw out the charges against Goodman on October 17.

Documentary producer Deia Schlosberg was arrested for filming protesters who broke into a pipeline valve station near Walhalla, North Dakota on October 11. She was charged with three felony conspiracy counts, and could face as much as 45 years in jail.

The Society of Environmental Journalists wrote law enforcement officials at the state and federal levels on October 19, objecting to the prosecution of journalists who have been covering the protests.

Recent visits by the Reverend Jesse Jackson and actor Mark Ruffalo and others have helped raise awareness of what is transpiring, and several Olympians have traveled there, will travel there, or are there now, experiencing police brutality.

Caro Gonzales of Olympia has been at Standing Rock since August as an organizer for the International Indigenous Youth Council, and was arrested and released on Friday. All her gear has been impounded.

“They snatched me while I was praying…then dragged me to the burial grounds to handcuff me and stomped on my arms till I dropped the tobacco offering and sage. They kept us in dog kennels. We were put in solitary and refused medical attention,” she wrote on social media.

She reports that she was charged with a felony and released. She is currently seeking anyone who may have video of her arrest to prove she was praying while taken away by law enforcement.

Amnesty International USA issued a press release on Friday saying they have sent a delegation of human rights observers to the Standing Rock Sioux Reservation, to monitor the response of law enforcement to protests by indigenous communities.

AIUSA also has sent a letter to the Morton County Sheriff’s Department expressing concern about the degree of force used against the protesters. The organization will also call on the Department of Justice to investigate police practices.

“….Don’t hold hatred in your heart for those officers (at Standing Rock) because that’s not what we do in the Sun Dance way. I want to say, turn that around on them, just hope that they start looking at their human consciousness that’s been stolen from them…that they may have a spiritual awakening, a personal experience. They might say, ‘What am I doing? What am I doing to this person, this human being that I’m pulling out of prayer, pulling his naked body out of the womb. What am I doing? What am I doing? I can’t do this anymore, for money….’ In that way, he might transition back to those birds, those trees. All the natural things around him might start talking to him again. The birds might say, ‘Hey, come back, come back and talk to us, stop what you’re doing. Let’s live together in hope….’”

Lydia Drescher, California Band of Mission Indians, Tongva, of Olympia, has already been to Standing Rock and said she will leave again on November 20 to deliver much needed community donations gathered in Olympia.

There are three locations where individuals can make clothing donations. Although there was an initial abundance of clothing sent to Standing Rock, those items, including tents and teepees, have recently been taken away by law enforcement.

The request is being made now to donate earplugs, goggles, heavy socks, long underwear, gloves, and other warm items that are not too bulky.

A donation box is located at the Westside Co-op at 921 Rogers St. NW, but donations can also be taken to the Eastside Coop at 3111 Pacific Avenue SE. Other donation box locations are at The Longhouse at The Evergreen State College, and Traditions Fair Trade, 300 5th Avenue, in downtown Olympia.

Financial donations made at either branch of the Olympia Food Co-op will be matched, dollar for dollar, up to $1,000. In addition, the Co-op is asking patrons to “round up” their grocery bill to the nearest dollar or more to donate to the Standing Rock water protectors.

“This is a long fight that has been happening. This fight is old. It never stopped. It’s been going on forever…It’s our turn now to be strong in the way our ancestors have been strong…It is our time to go back to the old ways. Now is the time to reclaim them because the Mother Earth needs you. Your ancestors are singing to you. Now is the time to unite and remember our ways….It will be hard…but we have to be strong. Talk to the land, talk to each other….Pray for accountability, pray for healing, justice, and long term systemic change. Pray. Take the time to remember the sacredness in you and around you. Love yourself unconditionally and love those around you unconditionally, even though we may not agree….Hold compassion in your heart…because that’s the only thing that will keep us strong and get us through this. All my relations….” said Rebecca Cesspooch, Northern Ute, Nakota, of Olympia.

For more information, the Standing Rock Sioux Tribe at www.standingrock.org and is accepting financial donations online that will go toward legal, sanitary, and emergency purposes.

Janine Gates, Olympia, is a freelance writer and photographer, and has an Olympia news blog, Little Hollywood, at www.janineslittlehollywood.blogspot.com.

Next:
The Chaplin-Thompson trial is scheduled to begin on October 11,…