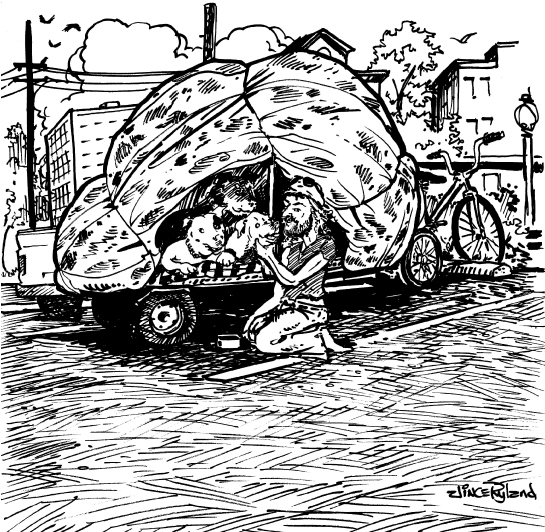 Derrick McDougal, a valued and loved member of the community, will be missed

The tragic death of a much-loved local homeless man has caused a surge of endearment from the public and (hopefully) drawn attention to the struggles of all the homeless.
Between Friday, August 30 and Saturday, August 31, twenty-eight-year-old Derrick “Dudeman” McDougal took his own life.  His famous bicycle tarp-trailer rig, with its three friendly dogs, was taken to friends of his.  Though the coroner couldn’t initially identify the body without having knowledge of his next-of-kin, the news flew through the community.

The Facebook page, Olympia Memes, started an online public funeral fund on Sunday, and exceeded its initial goal within the first twenty-four hours. To date $3,810.00 has been collected for the fund, more than enough for his cremation and a memorial plaque with the remainder going to local charities.

Candlelight vigils were held on different nights at both the Artesian Well and at Capitol Lake in Olympia.  Dudeman’s dogs came to the Capitol Lake vigil, tails wagging as usual, and one even wore angel wings (Girly-Girl). The woman who had brought his dogs (who will remain unidentified for her privacy), promised that they would be well cared-for.  She claimed to have received Dudeman’s suicide note, and that in it he wrote that he hoped his bike trailer set-up would one day be manufactured to temporarily house the homeless.  She also wanted people to know that every homeless person is important to someone, regardless of their circumstances.

At that time, members of Dudeman’s family had not been located, but his friends and community took it upon themselves to honor him.  There was an outpouring of love and mourning for him in the form of donations for his funeral fund as well as local non-profit groups, social media posts, fund site comments, at both vigils, and at his memorial service. Dudeman’s estranged family was finally located by the county coroner more than a week after his death and, despite their grief, they were touched to learn he had created a family of his own here in Olympia.

All around town, he was known simply as Dudeman.  He was a loving dog owner, and despite widespread prejudice against pitbull-types and rottweilers, he chose to keep Bear, D.O.G. and Girly-Girl, when it may have been easier to give them up.  He called them his kids. He kept them well-fed and built them the best transportable home he could. He was constantly rebuilding and improving his bike-trailer with the help of others, making it stronger yet lighter and even adding lights. Dudeman was frequently seen pedaling his rig uphill from downtown while the dogs lazily rode along in the cart behind him.

Since pets are not allowed at shelters, many homeless choose to remain unsheltered to stay with them. He loved animals and helped other homeless pet owners by sharing what he could.  Even parents with small children trusted and loved his dogs.  I asked to take a picture of them this spring and he had them all pose nicely for the camera for me.  Though they were well-behaved and friendly, his dogs were in danger of ending up at Animal Services any time he left them unattended or they got loose (and with a fee to retrieve them) so he was constantly concerned about them.

Unfortunately, his beloved dogs sometimes became an excuse for harassment by the police.  I think Dudeman and his dogs helped to change a lot of people’s minds about breed prejudice and his obvious love for them was infectious and endearing.  At Dudeman’s memorial service, Pastor Phil Prietto said that his love for his dogs reflected God’s love for us and that drew people to him and was his own sort of ministry.

There are many circumstances that lead to someone being homeless, and certainly many more complex motivations of suicide that we can only attempt to understand.  According to Dudeman’s family, his misfortunes began in childhood when both parents and a brother died. His second cousin, Tonette Lazanis, posted on his Facebook vigil event page that the family hadn’t known where he was for years but he was always loved.  She stated that, “He had a very tragic life… which I believe led him to become such a lost soul [that] he couldn’t overcome his heartache inside.”  Another family member wrote, “After losing both of his parents at a young age, Derrick was determined to pave his own way through life.

Dudeman was foremost an advocate for the homeless.  He rarely asked for help for himself, yet often tried to help others.  He spoke out against the daily struggles that he and his street family faced.  As of the 2012 Thurston County Homeless Census, at least 724 adults and 188 children are homeless or live in substandard housing, and those are conservative numbers.  The public school census reports an exponentially higher number of homeless youth using a different methodology.

The most common reasons for homelessness in this area are a family crisis and economic hardship.  Over one-third of the homeless in Thurston County report having a mental illness or permanent physical disability, and Dudeman included himself in this statistic.  Perhaps the tipping point for him and many other homeless has been the increasing criminalization of homelessness.

The Olympia City Council has enacted municipal ordinances such as a sidewalk ban (sit/lie law) and a camping ban on all city property.  Since the homeless, by definition, don’t have land of their own on which to sit, lie, or sleep, this pretty much makes lack of shelter a crime.  Police are arresting and bullying those who search for food in dumpsters—or even throwing trash in them—because the dumpsters are considered city property.

Arrests for violating municipal ordinances create more obstacles to escaping homelessness with criminal records and fines that they can’t afford to pay.  Criminal activity and incarceration puts those who depend on Social Security disability income at risk for denial or loss of benefits.  In addition, when a homeless person is arrested they often lose their few precious belongings and those with jobs lose vital income and may be terminated.

When the city of Olympia banned Dudeman with an exclusion order, he was cut-off from vital services and his street family.  Ben Charles, founder of Crazy Faith Ministries, sadly recalled how often Dudeman was frustrated by the cops pestering him or tearing down his rig and he would then tell him to just rebuild it better.  Soon after his death, local activist Gary Jones posted a video on YouTube of Dudeman passionately pleading with the Olympia City Council to stop harassing the homeless.  His desperation was obvious, as he stated the following:

“I’m really tired of being kicked by cops, being threatened, being arrested, and I’m tired of being harassed, and my dogs, my service animals, as I am a disabled individual. I am speaking of everybody I know on the street and I’m really upset. I’m so upset; I can’t even use the words I’d like to say… So I’m just gonna let you guys know, it must stop. It must stop. It has to stop.”
“Quit pushing us around, because like a rubber band, [if] you pull us too far, we’re gonna snap.”
“All of you that are against homelessness; it’s not our fault, so stop.”
“We breathe, we bleed, we sleep; we go through all that, and we have problems of our own, so quit adding to them. Quit, I say quit.”
“God bless.”

While the Olympia City Council has promised support for a new shelter downtown, residents have resisted each step to progress.  Despite Thurston County’s 10-year plan to cut homelessness in half, according to the 2012 county homeless census, there has been a 64% increase since 2006.

Imagine not knowing how to get your next meal, constantly moving to find a spot where you can rest without being harassed, always guarding your small collection of belongings, rarely getting a restful night’s sleep, or being woken up by police tearing down your camp.  Homeless people face the daily psychological distress of their difficult circumstances, therefore suicidal ideations and attempts are much more common among them.  A 2002 study showed that a startling 61% of participants had experienced suicidal ideations and 34% had attempted suicide.  There is a notorious lack of mental healthcare available for the homeless despite their higher occurrence of mental health issues.

Dudeman’s remains have been cremated and family members scattered his ashes in Eastern Washington in a lake where his mother’s ashes were also spread.  His family kindly permitted some of his ashes to remain in Olympia, which were scattered at Woodlawn Funeral Home’s memorial garden during a service provided by Pastor Phil Prietto of City Gates Ministries on September 20.  A plaque memorializing Dudeman will also be added at Woodlawn so that all who cared for him may pay their respects.

His family has relocated the dogs to an animal rescue group which is screening applicants to find them great homes, or preferably, a home together.  The owner of the Olympia Memes Facebook page (who prefers to remain anonymous) has created an outreach group called “I Remember Derrick” (also a FB page) and plans to distribute kits of basic essentials and suicide prevention information to the homeless.

Many who knew Dudeman wonder how a man who was so resilient could commit suicide. His family stated in a letter to the public, “We may never know why ‘Dudeman’ decided to take his life—maybe he was tired of the stigma that faces the homeless community, or exhausted from the extraordinary hardships he faced each day.  Regardless of his reason, this tragedy has ignited a flame and inspired a community to help drive change.”  Those who cared for him will remember his compassion and positive influence.

Each homeless person is or was loved by someone, somewhere. They are someone’s child, sibling, parent, grandparent, spouse, or friend—a member of a family—even if it’s estranged blood relations or their street family.  We must respond as equals who can empathize with their struggles rather than jump to judging their circumstances. Dudeman was special in that so many people in the community cared about him, even those who barely knew him, and hopefully that has caused many to realize that each homeless person is special in their own right. I just wish that he could know how many people he touched and how much he was loved.  Rest peacefully, Derrick “Dudeman” McDougal.

So…what can you do to help our county’s homeless?  Attend City Council meetings involving plans to address homelessness.  Express support for a new shelter, The People’s House, which plans to fulfill currently unmet needs of the homeless community in downtown Olympia. Volunteer with local homelessness outreach programs such as City Gates Street Reach, I Remember Derrick, Crazy Faith Ministries Street Feeds, EGYHOP (Emma Goldman Youth and Homeless Outreach Project), Dave’s P.B.J.Project, Community Youth Services, Bread & Roses or other groups; donate funds or supplies; or just put together a care package yourself and give it to someone who needs it and have a chat or just share a smile. Show that you care.

Erin Palmer is an Olympia resident and occasional writer.

Next:
The peculiar candidacy of Nancy Koppelman Just when you thought…