Taking action to turn things around in the 2020 election

It all started on Martin Luther King, Jr. Day with over 170 people attending a meeting of Olympia Indivisible (OI). I entered the basement of St. John’s Episcopal Church inspired by posters on the wall with quotes by King such as “Our lives begin to end the day we become silent about things that matter.”

Olympia Indivisible was born shortly after the 2016 Presidential election, with an outpouring of incredible work and dedication by Lisa Ornstein and Carla Wulfsberg. As part of the National Indivisible movement, it advocates at state level for progressive Democratic legislation. Nationally we work to oust Trump, take back the US Senate and increase Democratic seats in the House of Representatives.

Many were stirred to gather after the impeachment circus brazenly displayed that our very democracy was at risk. People gathered to make a difference because the idea of four more years of Trump was abhorrent. Could human decency, care of others and the planet survive?

At the meeting, I joined the Home Team, which would write letters to Arizona Democrats less likely to vote. It has been proven that handwritten encouragement can increase voter turnout by 3-4%. Arizona was the focus because Trump won the state by a small margin in 2016 – 4.1%. This time around, a Democrat has a good chance of winning a Senate seat.

Part of the effort included travel to Arizona. Initially I thought that was too much for me, but then I realized we have less than a year to turn things around. I came to believe, as I heard someone say at the meeting, that action is hope.

Here is the day-to-day report of my trip.

2/28/2020 Five of our group of 12 arrived in Phoenix. Others are already here or arriving tomorrow.

The locals say many new residents are registering as Democrats. There are 135,000 more Republicans than Democrats registered in Arizona. We will focus on registering college students and encouraging them to vote. We will also canvass for state candidates. It’s a numbers and encouragement game.

The state legislature is important because although for years the Republicans have controlled both houses, they now have slim control in the House (31-29) and a 17 to 13 lead in the Senate. If the state legislature turned Democratic it would have the authority to create fair 2021 redistricting after the census, thereby remedying terrible cases of Republican gerrymandering.

2/29/20 Our first day we met with folks at the newly opened headquarters of Legislative District 28, which covers a lot of Phoenix. They are supporting three candidates, all running to improve education. As a result of Republican control over the last 12 years, education became so underfunded that Arizona schools are rated close to the bottom of all states. There are also problems with unregulated charter schools.

After our training we each partnered with a local volunteer. I had Mary, a hardworking, longterm, senior canvasser. We drove 15 minutes north to a neighborhood, carrying our phones with the “Minivan” app. This has downloadable addresses of Democrats in the area. We used the app to enter updated info about voters. Most people were receptive; some work in the education field. Their concerns included low teachers’ salaries and health care.

The morning was cool but by 11 am I was heating up. One of our main duties was to gather 1,000 signatures for each candidate so that their names can appear on the ballot. We met a young Republican who told us he is voting Democratic because he was discouraged over the education issues.

We also gave out flyers about a house party where neighbors could meet the candidates. Mary encouraged people to go—they would meet each other and see which of their neighbors are ‘Dems’ so they could vent or cheer together. This was telling—people here keep their politics close to the vest.

3/1/20 On our second day, a Sunday, many people didn’t answer the door. We left literature on locking metal screen doors of stucco homes with pebbly landscaping and large cacti.

I hooked up a young man with volunteer opportunities at the District 28 headquarters. That gave me a lift after conversing with an older woman who was a Democrat but now believes they are no good. I couldn’t convince her that we need to remove Trump. My hunch was confirmed after asking about her news source: Fox. My parting words were for her to try public television news.

We returned to party headquarters for their official grand opening. Tons of people were there, along with state candidates Aaron Lieberman, Christine Marsh and Kelly Butler. Our group from Washington was recognized and given hats, tee shirts and applause.

I was tired at the end of the day but we met with Richard Gooding of Field Team 6 at the hotel. Richard focuses on registration on college campuses in Phoenix. There are 140,000 students here. Richard trained us in registering and the nuances of the Arizona voting system.

3/2/20—3/5/20 We broke into groups of three to four and drove rental cars to various universities and community colleges. There was a lot of driving because Phoenix is large and very spread out.

We found that many students are already registered and that local groups and groups from California have been helping with registration here, too. But we do register some students, providing education and encouragement, as well.

We reminded students to get their Democratic primary ballots in the mail by a certain date. Some had not received a ballot. They had to check their mail at their parents’ house. We can re-register them if they have moved or don’t want a ballot sent to their parents. If they have registered as independent, which some have, they will not receive a primary ballot. We can re-register them as Democrats so they receive a ballot to vote in August’s primary election.

Our team came with anti-Trump stickers and “Voting is Your Super Power” stickers. Many students love them. It is an opportunity to talk more. Many told me they are overwhelmed with college work and say they can’t deal with, or know enough about political stuff to make a good decision. They expressed confusion about who was the best Democrat candidate or what was true anymore. Politicians not working together bothered one.

Many had difficulty coming up with answers when asked what they thought were the important issues. Some listed student debt and climate change. Other team members said they heard foreign policy, women’s rights and health care. Many liked Bernie Sanders but said if Biden got the nomination they would vote for him.

Take-aways. My most memorable moment came in talking with a Christian student from Montana who thought he would vote for Trump. I tried to infuse some complexity into his most important issue, abortion. I communicated that even though Trump says he is against abortion there are many other ways he is hurting people and the environment. I suggested he work on his issue by supporting health care, housing and adequate nutrition for all people as a way to prevent pregnancy and abortion.

Another team member found hope in learning from a student that she and her mother will both be voting for President for the first time together. Her mother is a naturalized citizen from Bosnia. Some team members encountered a teacher who was offended by our anti-Trump stickers, but found common ground discussing environmental issues. Afterwards the teacher said he had always been a ‘McCain’ Republican and would not vote for Trump.

We all tried to express to students the importance of their vote, especially in November. I told them I was concerned that folks their age have not seen what the world was like before climate change, how normal seasons flowed predictably from one to another and that natural disasters were few and far between. I said I was older and would not live to experience the worsening effects that they would. The fast action we need to lessen the impacts of climate change would not happen under Trump. I told them that their age group doesn’t have the best voting record. I beseeched them to vote and to make sure all their friends do. They said they would.

Did we make a difference? There is no way to quantify how much or in what way. How much is one heart-to-heart conversation worth? How far does it echo?

I hope our efforts are the beginning of conversations and other small efforts by many to alter our national landscape this fall.

Robin Ivey-Black is a local writer, artist and community builder. People concerned about 2020 elections should check out Olympia Indivisible at  or visit Vote Forward to send handwritten notes to Democrats. 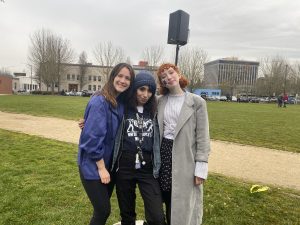