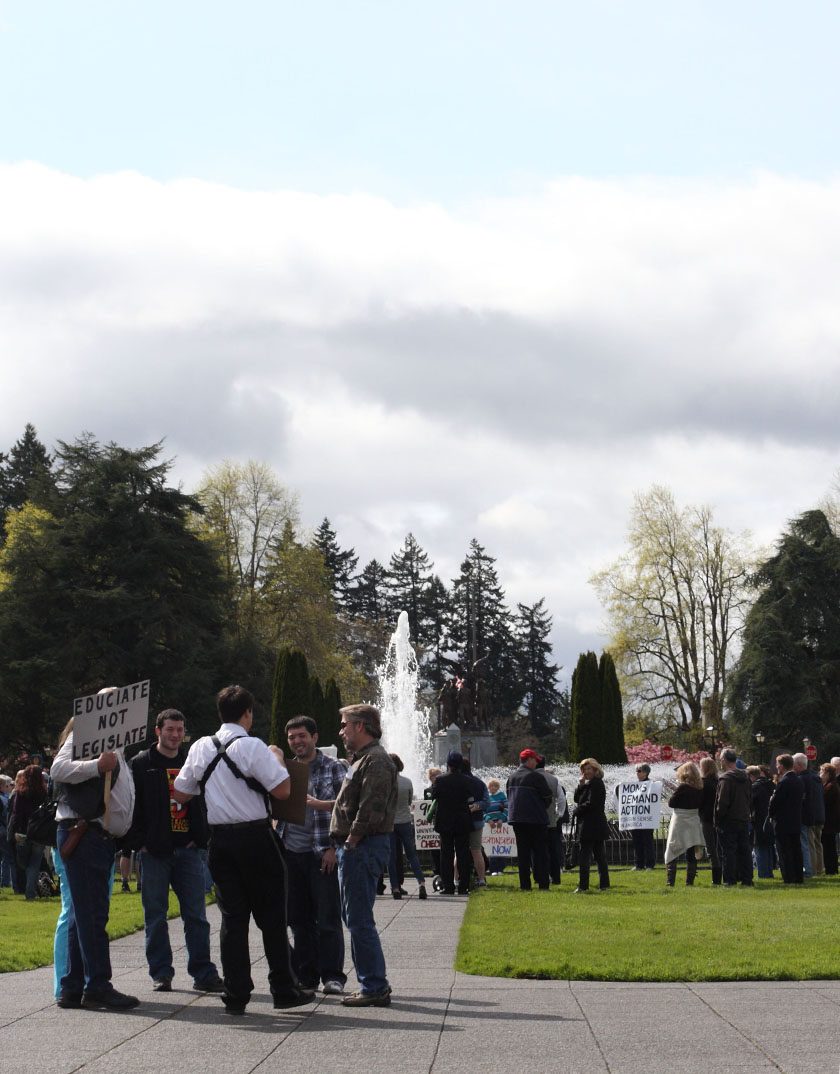 Olympia gun control advocates take matters into their own hands

Olympia gun control advocates take matters into their own hands

A pressure group that advocates tighter gun control has launched a campaign to strengthen background checks on those applying for firearms. The initiative was launched after authorities in the state failed to act on the issue, declining a similar scheme that was recently presented to them.

The initiative, launched by the Washington Alliance for Gun Responsibility (WAGR), will require a collection of 250,000 signatures. All signatures must be genuine and verified, meaning that the group will actually have to collect in excess of 300,000 signatures. The campaign is expected to launch in the summer and will test the power of ordinary citizens on an issue that strikes a chord with so many of the American public.

Pressure on government is mounting

The pressure has been mounting on government officials to change the laws on gun ownership, particularly following several high profile school shootings in various parts of the country. One alarming report found that some elementary school teachers were resorting to carrying their own arms into schools, as they felt it was the only way they could protect their classes, should they be faced with armed intruders. The teachers’ revelations were a harsh reminder of the perils faced by schools – and indeed other public organizations – which feel threatened by the country’s lax laws on gun ownership.

“For law enforcement, criminal background checks are essential in protecting lives and property,” said Snohomish County Sheriff John Lovick, who is supporting the WAGR initiative. It is hoped that the campaign will also attract the support of other public figures once it has been launched.

Despite mounting national pressure and interest, Washington’s crucial recommended legislation was turned down by the authorities last month. This was despite many separate pieces of evidence that suggest public opinion on this subject is in favor of extra checks. In fact, a recent survey by Elway Poll (February 2013) found that 79 percent of voters in Washington think that further checks should be brought in for anyone who wants to by a gun – whether it be through a licensed shop or from a private individual.

This public support will be comforting to the organizers of the petition initiative; the campaign is likely to cost them between three and ten million dollars. These costs will be incurred during the signature collecting stage – for marketing, direct mail and other promotional activity – as well as launching various competitive measures against pro-gun lobbying groups. Reaching out to voters will not be a cheap task; it is one that the WAGR is taking extremely seriously.

The WAGR will be hoping that public will stay true to the results of the Elway Poll; in 1997, surveys showed that the majority of Washington residents were in favor of tightened gun laws. However, when a bill was presented that would have required all would be gun owners to go on a safety course, it was famously rejected by the same public with 70 percent voting against it. It was subsequently dropped and no similar peices of legislation have been suggested since then.

Guns for the vulnerable?

The current laws on gun ownership in Washington require all would be buyers to undergo a background check if they wish to make a purchase from a federally licensed firearms seller. The recent suggestions to authorities in Olympia was that these checks should be extended to include all private transactions; at present, there is no effective means of monitoring who is reselling guns, and who is buying those guns from them. This leaves gun ownership open to potentially anyone, including criminals. It is also feared that many people suffering from mental illness or drug addiction are able to obtain guns via private sellers; there is no safety net protecting against this kind of ownership, which is a grave threat to members of the public. Gun owners suffering from drug addiction are of a particular danger to the public, with many cases having been reported of individuals turning a gun on someone while under the influence. Rather than letting vulnerable drug addicts have an open path to gun ownership and crime, we should be offering them help to overcome their addiction, and keep the public safe in the process.

Only when we implement tougher gun control will we be safer.

Evelyn Gunn has degrees in International Business and Journalism and has covered everything from global politics to local news, economics, and sustainability issues.

Next:
Dear readers, for over twenty years, Works in Progress has…