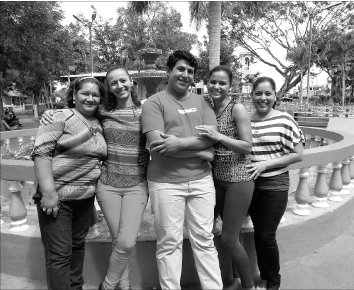 The Thurston-Santo Tomás Sister County Association (TSTSCA) has hosted numerous community exchanges as part of our sister city relationship with Santo Tomás, Chontales, Nicaragua. Since 1988, over 150 people from Thurston County have visited Santo Tomás, and 31 tomasin@s have visited Olympia. Sometimes always they include learning about reality on the ground, be it here or there. Throughout the typical three-week long delegation visits to the states, TSTSCA members accompany our guests to local schools, the public colleges, libraries, museums, and other relevant organizations in the greater Olympia area. Some context:

TSTSCA began as a part of the decentralized sister city movement that sought to “sister” with communities in countries with which the US was at war, overtly or covertly. During the 70s and 80s in Nicaragua, a brutal dictator was toppled, followed by an impressive social and economic revolution that was attacked by the US funded contra war. All of this drew the attention of many people in the US who demanded an end to funding the war that caused incalculable amounts of suffering, while demanding respect for a sovereign nation. After the war ended and Nicaragua shifted into a long period of disastrous neoliberal economics, TSTSCA maintained its relationship with Santo Tomás by supporting projects including a children’s free lunch program, small public library, and the construction of different education and health care facilities. Nicaragua entered yet another economic era seven years ago with the re-election of the Sandinista Party, access to cheap Venezuelan oil making possible the financing of poverty reduction projects, signing on to the CAFTA-DR Free Trade Agreement and a further opening of export markets (coffee, textiles, gold, beef, sugar, seafood). A controversial inter-oceanic canal has been given the green light to proceed, displacing farmers, with volatile opinions being sounded across the country. A new law is now in effect to squelch protests and demonstrations.

In the midst of many challenges in both of our countries, we are honored to host the 11th community delegation from Santo Tomás, which will arrive in Olympia on April 19th and depart for home on May 12th, 2016.  This delegation will be largely focused on education, with a good dose of cultural pride.

Please join us and connect with the delegation from Santo Tomas.