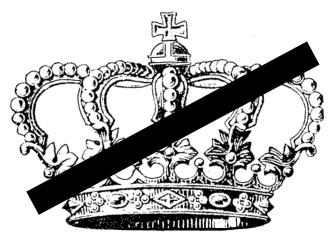 Neither a kingdom or a horse! The tortuous marketing of the Spanish monarchy

The last waltz of Francisco Franco
On June 19, after 39 years as a monarch, Juan Carlos I of Spain abdicated the crown in favor of his son Felipe VI. Juan Carlos became king thanks to the agency of fascist dictator Francisco Franco who in 1969, six years before his death, nominated him as his successor and future king of Spain. After publicly declaring loyalty to Franco’s right wing party, Movimiento Nacional, the young king and the aging fascist lived a political romance marked by the mutual exchange of compliments and synchronized political statements staged to delineate the legitimation and continuity of 36 years of Franco’s regime. Juan Carlos became Franco’s heir and the crown became the new symbol by which Spanish fascism would survive.

But in the words of French anarchist poet Leo Ferré while Franco represented death, the Spanish people represented life. After the demise of the Generalisimo in 1975 (General of Generals according to Franco own self-representation) it was clear that the majority of Spaniards were not willing to accept and comply with the specter of fascism. A huge counter-culture and political progressive movement known as “La Movida” made its appearance throughout the nation, transgressing and contesting the cultural values of Franquismo and demanding free political and cultural expression. For the Spanish dominants classes and the new monarchy it was clear that if the capitalist social structure molded by four decades of Franquismo was to persevere, certain political concessions were necessary.

As result of the popular opposition, a Constitutional Monarchy was established in 1978 which had a dual effect. In the political sphere, it opened spaces for the democratization of the state and made possible the democratic participation of political parties and forces repressed and excluded during Franco’s dictatorship. Conversely, in the economic sphere, it secured the reproduction and growth of the existing capitalist mode of production. The monarchy under this new model was to play a key role in the preservation of the system.

The last waltz of Juan Carlos I
Unless you suffer from an overdose of social naiveté, it would be disingenuous to interpret this month’s abdication of Juan Carlos I in favor of his son Felipe VI as a simple act of royal protocol immaculately conceived above politics and class interests, or as “a final gift to a grateful Spain” as Charles Powell writes on the London-based Financial Times.

A better understanding of the abdication is possible if we see Juan Carlos and his family not exclusively as a royal family, but as a capitalist family whose economic interests are closely intertwined with Spanish and European industrial and financial capital. As family members of the royalty, the family is interested in the survival of the monarchy and therefore willing to play the role of promoters of national unity to smooth the functioning of a system Juan Carlos was a key player in creating. He is also one of its main economic and political beneficiaries.

Historically, Juan Carlos’ abdication takes place amid a severe and prolonged economic crisis that originated in 2008 as a consequence of financial mismanagements and real estate loan speculations, followed by harsh austerity measures imposed on the population (who as usual was not involved in the economic mishandling). Currently the unemployment rate is 23.93% (second only to Greece), Youth unemployment (those under 25 years of age) reached a record 56.1%, and according to the Spanish National Statistics Institute, the rate of “very long term unemployment” has increased by more than 500% since 2007.

Conversely, according to estimations by the University of Brussels, Juan Carlos has accumulated a known personal fortune of 1,600 million euros or 2,560 million U.S. dollars. This figure does not include all investments through third parties and real state properties or “perks” such as the 10 million euros (13.6 million U.S dollars) worth Yacht, which according to The Guardian (UK) was given to the king by a group of businessmen of the Balearic Islands “as token of appreciation for promoting tourism in the area”. A dark cloud of unanswered questions regarding the magnitude, legality, and sources of his fortune shadows the monarch.

The Latin American information network Telesur recently published a report estimating that the equivalent of 10.5 million U.S. dollars per year of Spanish tax payers money are assigned to cover the expenses of Juan Carlos, his wife Sofia, his son Felipe, his daughter Elena, and Felipe’s wife Letizia. The King, according to Telesur, does not pay electricity or gas in any of his residencies; the Spanish National Patrimony offices cover the expenses. The Secretary of Defense and the Interior cover security and transport expenses and there are more than 372 staff members working for him in the Royal Palace

The continuous and progressive deterioration of the King was accelerated two years ago, when in a public interview he stated he was not able to sleep at night worried about the unemployed people of his country. Ironically, his true feelings were revealed when it leaked that shortly after his statement he went on a secret and extremely expensive elephant hunting safari in Botswana, southern Africa – yes! He went to kill elephants! – Had he not have to be treated by a hip injury sustained during the safari, his unique treatment for insomnia would have remained undiscovered.

The unemployment, the austerity measures, and the scandals surrounding the king and other members of his family resulted in growing popular discontent demanding the king’s resignation and the call for a national referendum to abolish the monarchy. It is within this context, in a last minute effort to oxygenate a crumbling institution that Juan Carlos abdicates in favor of his son Felipe.

Felipe VI’s first steps on a slippery ballroom dancing
Almost two and a half centuries ago Tomas Paine, coursetier, journalist, political philosopher, founding father, and radical advocate of civil republicanism, wrote “Common Sense” a pamphlet of acerbic criticism questioning among other things the legitimacy of the Monarchy and hereditary succession. For him, “To the evil of monarchy we have added that of hereditary succession; and as the first is a degradation and lessening of ourselves, so the second, claimed as a matter of right, is an insult and imposition on posterity. For all men being originally equals, no one by birth could have a right to set up his own family in perpetual preference to all others for ever.”

But if the coronation of Felipe VI was the latest insult to the Spanish people, the imposition on posterity of the new monarch appears to have weak political beginnings. Prior to, and after his coronation, hundreds of thousands of people marched through the nation stressing three crucial demands:
A referendum that allows people to decide between monarchy and republic
The creation of a new constitution to consolidate the republic and grant full democratic rights to all the population and national groups (i.e. Catalonia, Basque Country, and Galicia) that integrate the Spanish state.
Put the economy on the hands of working people of Spain.

The content of these demands, along with the multitudinous rallies that reminded and surpassed in magnitude those of the “Indignados Movement” of 2011, reflect not only a rejection of the monarchy and the current economic crisis, but an important political shift to the left among the Spanish voters. According to SocialistWorker.org, in last month elections for the European Parliament left-wing parties did their best. “Izquierda Unida (United Left, or IU), a coalition that includes the Spanish Communist Party, gained six members of European Parliament. Several other left-wing coalitions from different nationalities within Spain such as the Basque Country, Catalonia or Valencia, improved their results or sent representatives to European Parliament for first time”.

But the biggest surprise, according to the same source, came from PODEMOS (“we can” in Spanish), a newly born party, with less than a 100 days of political life, no coverage by mainstream media, and a tiny budget, won 1.2 million votes, 7.5 percentage points and 5 members of the European parliament. Podemos, although clearly rooted on Marxist leftist ideology (Many of its founders worked did political work in Venezuela during Chavez) had based its success on a “putting forward a common sense discourse” of ideas and values shared by the majority of the population, and “engaging in debates with political opponents to expose why they don’t embody those values.” Podemos clearly appears to be the political and social continuation of the Indignados movement of 2011, and a well-defined departure from the two dominant political parties in Spain, the PP and the PSOE, both responsible for the mismanagement of current economic crisis.

Meanwhile, Felipe VI in his acceptance discourse promised to reinvigorate the monarchy and return the public trust on the monarchy by declaring that public life should be guided by moral and ethical principles. The idea of structural inequality, parasitic privilege and anti-democratic nature imbedded in the monarchy obviously doesn’t seem to strike him as amoral or unethical.

In Shakespeare’s play, King Richard III, defeated in battle and desperately trying to save his life screams “A horse! A horse! My Kingdom for a horse!” Hopefully the Spanish people will provide neither a kingdom or a horse to the heirs of Francisco Franco.