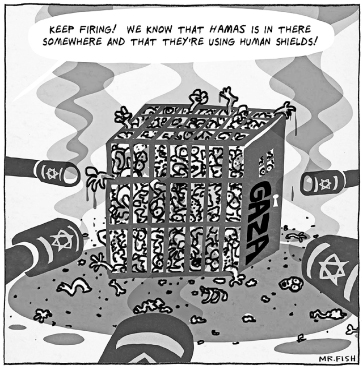 Negotiating in bad faith; Israel determined to undermine ceasefires in pursuit of Hamas, Gaza at the whim of the United States and Egypt in their unequal support of Israel

Despite the ping-ponging between various diplomats and international agencies on the specifics of a peace plan to end the violence in Gaza, there has yet to be any plan that is acceptable to both sides. The major impasse is that Hamas, knowing the people of Gaza have survived for nearly a decade under a brutal economic blockade that has denied them essential resources, is trying to use the crisis as an opportunity to end Israel’s economic siege of Gaza. Meanwhile Israel, frustrated by Mahmoud Abbas’ attempt at a reconciliation government with Hamas, is seeking to strangle the organization, even if it has to destroy all of Gaza in the process. Breaking through this impasse in the immediate future is unlikely. At most, what we can expect is a lukewarm ceasefire that will stay the hand of violence until another crisis emerges. In addition, and quite tragically, the context of the impasses is still misunderstood by the majority of Westerns. For the most part, the Western press has blamed this stalemate on Hamas while absolving Israel of responsibility. The reality is much different. Far more so than Hamas, it is Israel—with the support of the United States—that is responsible for preventing a viable peace plan from emerging, and, without continual international pressure, Israel will not move from this reckless position.

Gaza—On July 12, shortly after Israel’s most recent assault on Gaza, the United Nations Security Council released a statement that called on both Hamas and Israel to initiate an “immediate, durable and fully respected ceasefire” that would eventually lead to “the full withdrawal of Israeli forces from Gaza.” The statement was merely a press release, not a resolution, and, because of this, it was not legally binding. The following day Israel sent leaflets over the town of Beit Lahiya located in northern Gaza that read: “Those who fail to comply with the instructions to leave immediately will endanger their lives and the lives of their families. Beware.” The message was clear: we are ignoring calls for a ceasefire; we will continue to bomb Gaza; if civilians happen to die, it is their fault for being there.

While the United Nations Security Council’s call for a ceasefire rapidly descended into irrelevancy, Egypt—under the guidance of Abdel Fattah al-Sisi—offered its own ceasefire plan. This time Hamas rejected it, openly and formally. The decision was controversial, but it was not without its reasons. Abdel Fattah al-Sisi’s military government is adamantly opposed to Hamas. Seeing the organization as an extension of Egypt’s own Muslim Brotherhood, Abdel Fattah al-Sisi views the marginalizing of Hamas as essential to his own domestic consolidation of power. For this reason, the terms of the ceasefire that Abdel Fattah al-Sisi put forward conceded nothing to Hamas. It left the brutal economic blockade of Gaza in place and made no promise to address the underlining issues of the conflict. Hamas, interpreting Egypt’s offer as a form of capitulation, decided to reject.

Hamas’ rejection of the Egyptian plan was widely reported in the Western press, and exploited by Israel to escalate the conflict further. But, a depiction of Hamas as an erratic political party, myopically determined in its destruction of Israel, is a caricature of the organization. What was not widely reported within the Western media is that though Hamas rejected the Egyptian ceasefire plan, party leader Khaled Meshaal made clear that the organization was open to other ceasefire efforts. Speaking in Doha, Qatar on July 24, Meshaal outlined Hamas’ own terms for the cessation of hostilities: that Israel end its economic blockade of Gaza, that Palestinian political prisoners are released, and that the Egyptian border to Gaza is eased to allow access to humanitarian aid and to give refugees a chance to escape the violence; in other words, he called for Israel and Egypt to follow basic humanitarian requirements established for them under well-known international laws.

Unfortunately, this framework for peace was rejected by Israel. Israel did eventually agree to the idea, first proposed by Khaled Meshaal, of a humanitarian truce to allow aid to get to areas hardest hit by the conflict, but this was their compromised position. The original proposal, presented to Israel by Secretary of State John Kerry, was for a weeklong truce between Israel and Hamas. During this time security arrangements and a possible lifting of the blockade on Gaza would be discussed under the guidance of Egyptian negotiators. Hamas agreed to these terms—a dramatic concession from their original position—but the Israeli Security Cabinet scoffed at them. According to the Israeli newspaper Ha’artez, the Security Cabinet referred to Kerry’s ceasefire plan as a “prize for terror.” Apparently, it was only after some diplomatic cajoling on the part of Kerry that Israel agreed to the twelve hour humanitarian truce that lasted from July 25 to July 26.

When the time period of the truce ended, it was widely reported that Israel had offered to extend the truce only to have their plan rejected by Hamas. The New York Times ran an article on July 27 entitled “Israel Extends Cease-Fire in Gaza, a U.N. Request Rejected by Hamas.” The insinuation was that Israel desired peace, only to have their efforts dashed by an erratic Hamas. The title could not be more misleading. It is true that Israel offered to extend the truce, but only on the condition that its soldiers would be allowed to stay in Gaza and destroy the area’s underground tunnel system. Gaza’s network of underground tunnels originally developed as a means of subverting the economic blockade. For a few years, the tunnel system was the only way essentials such as food, medicine, concrete, and fuel made it into Gaza. As Abdel Fattah al-Sisi came to power in Egypt through the military coup, he sealed off all the Gaza tunnels into Egypt. Since then the tunnels have been used for organizing guerilla campaigns, and were used with marginal success against Israeli ground forces once they entered Gaza. Israel’s destruction of the underground tunnel network would of course be a military operation, and that meant that their offer to extend the truce was an extension that would only apply to Hamas. In an eerie Orwellian manner the same New York Times article admitted as much. It quoted Israeli chief of military intelligence Amos Yadlin saying that an extension of the truce would allow Israel “to destroy the tunnels,” and since that “was the mission anyway…why not do it with no fire around?”

Even more upsetting, the plan to destroy the tunnels was known and agreed upon by John Kerry beforehand. When Kerry initially presented his terms for a weeklong ceasefire, Israeli officials balked at the fact that the plan had nothing in it about Israel’s right to destroy Gaza’s tunnel network. This was intentional. There was no way Hamas would agree to such a plan and the United States knew that. According an article published in Ha’artez, a senior American official admitted that the issue of tunnel destruction was deliberately left out of the plan, but not because the US was insensitive to Israel’s military objectives. In private conversations the Secretary of State made it clear to Netanyahu that the United States would not protest the destruction of Gaza’s tunnels during any truce. Kerry, for all his diplomatic showmanship, planned from the start to double cross Hamas.

While the United States locked the Security Council away from the scene, the United Nations Secretary General Ban Ki Moon actively worked with John Kerry to devise another humanitarian ceasefire that was scheduled to begin on July 31. This truce was intended to last seventy-two hours, but it was immediately broken by Israel. Kerry, in a constant effort to appear conciliatory while supporting Israel’s militarism, managed to secure a humanitarian ceasefire with Hamas and the support of the United Nations by outlining terms that called for the cessation of all military actions. However, immediately after the ceasefire was announced Israel claimed that the ceasefire did end all military actions, with the exception of the destruction of Gaza’s underground tunnel networks, and these were the terms explained to them by Kerry.

Marco Rosaire Rossi is a graduate of the University for Peace in Costa Rica and a resident of Olympia.

Next:
First of all let’s take heed of the fact that…