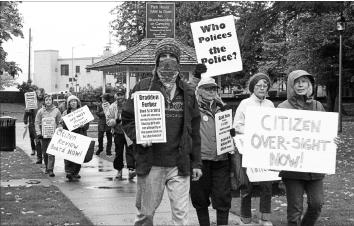 National day of protest against police brutality in Olympia

A dozen South Sound community members gathered in Sylvester Park in downtown Olympia to participate in a national day of protest against police brutality, just one of over 30 planned events held across the country, including Seattle.

Olympia’s event was sponsored by the Green Party of South Puget Sound, a group that has begun a study into Olympia police department incidents in which excessive or deadly force has taken place. Walking to the actual locations in the downtown area and taking turns reading an account of the incident that occurred there, the group honored those traumatized by and commemorated those killed by Olympia police officers in recent years.
Recognized incidents included those involving community members David “Long Hair David” Fawver, Steven Edwards, Maggie Belknap, Joseph Burkett, Jose Ramirez-Jimenez, Bradden Ferber, and Scott Yoos.

Janet Jordan, chair of the local Green Party, said that several of the victims were punished for simply not following orders fast enough. Others were overcome in struggles when they were suspected of breaking  the law.  While those present asked numerous, specific questions about individual cases, she said, in all cases, human lives were devastated, and in several cases, lives were lost.

Jordan later said videos are useful to citizens in conflict with the police, and many activists do take on the role of recording what happens during an incident. Although video cameras on Olympia police department vehicles are useful, lapel cameras on officer’s uniforms may be even more effective.

“We are hoping to break the pattern where Olympia police demand for instant and total obedience from citizens…and bring the police back to the status of human beings among other human beings, whom they have a responsibility to protect,” said Jordan.
As the group moved to each incident location with their placards, they often received supportive 5:00 pm rush-hour honks and thumbs up from passing drivers.
Janine Unsoeld is the managing editor of Green Pages and writes the Janine’s Little Hollywood blog.

Next:
A few days before the elections, a friend from…