The 2018 Middle Eastern Film Festival offers an opportunity to experience works of cinema that diverge from the mainstream.  This year’s festival presents three engaging feature films, two of which are animated.  All three films will be shown October 6 at Capitol Theater in downtown Olympia.  An exhibit of Yemen-focused photographs will occupy the mezzanine along with a number of children’s activities.

The festival’s goal is to expose the South Sound community to Middle Eastern films and multimedia artworks, as well as raise funds for the Shuruq IV: Olympia Arab Festival—coming to the Olympia Center on October 6.

Presented by the Rachel Corrie Foundation and the Olympia Film Society, the Middle Eastern Film Festival is the 13th iteration of the Foundation’s Peace Works project.

“Peace Works, a cornerstone project for RCF provides an opportunity to engage creatively with community members on issues of injustice and struggle, and this year is no different” said RFC Executive Director Whitney Faulkner.

2:00 p.m. The Prophet. Based upon a 1923 book of the same name by Lebanese-American author Kahil Gibran, this new animated adaptation concerns a housekeeper named Kamila, voiced by Salma Hayek, who also produced the film.

Set in Lebanon during the Ottoman Empire, Kamila works for a poet and artist named Mustafa, voiced by Liam Neeson.  Kamila has difficulty keeping her adventurous daughter Almitra (Quvenzahné Wallis) out of trouble. Together the trio embarks on a journey to return Mustafa to his home country, but they must evade authorities who fear that the truth in his poetry will incite rebellion.

5:00 p.m. Persepolis. The fan-favorite feature Persepolis is based on Marjane Satrapi’s autobiographical graphic novel of the same name. The story revolves around a young girl as she comes of age against the backdrop of the Iranian Revolution. The film was nominated for an Academy Award for Best Animated Feature.

Activities for the whole family. The event will also include a number of children’s activities, Q&A sessions, and a photography exhibit upstairs in the mezzanine. The photographs belong to the late photographer Luke Somers, who was a British-born American photojournalist and resident of Yemen. He was held hostage and killed by al-Qaeda in 2014.  “We are all aware of the polarization and oppression occurring in communities around the country, including our own,” said Faulkner. “We hope that through film and allied arts, we can amplify voices that are too often silenced.”

Jonah Barrett works at the Olympia Film Society as a marketing director. He is also a filmmaker and writer. 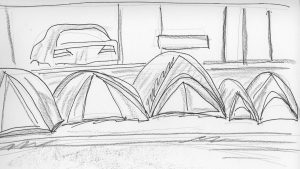