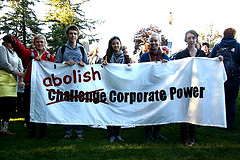 Matt Fu
I have travelled our country over two dozen times, typically on tour with my music on mass transit and month-long greyhound passes. I love the Real America I have come to know so well, the people and the places, the towns and spirit that hum so vibrantly in pulsing colors. This is not the America we see in the movies or television shows created by the handful of corporate media monopolies lurching over their National Entertainment State, who seek with every measure to blast us with disassociate content that tries to divest us from one another and to “find happiness” solely through their false fables and plastic products.
My favorite webcam was from National Geographic of a watering hole in Africa. My father had subscribed me to that nature porn magazine since I was a kid, so I expected to watch in on a hyperactive locale characterized by the sexy turmoil of combative species fighting over resources. Instead, I found a world composed of much calm, tranquility, and cooperation both in and among species.
We are a fiercely collective critter on a fiercely collective planet. I harken back to those who claim Darwin was co-opted, to lessons learned from the BBC series “The Century of the Self” and to those who point out that the materialistic individualism we are submerged in now is not where we come from or what we are, it’s not the human-ness that pulses through our veins and our bones. It’s just a recent perversion in an endless stream of persuasive attempts by that corrupt minority who seek on the highest soapbox, with the sharpest blades and loudest grunts, to try and dictate to us in the commons how we should live and how we subvert our livelihoods to them. We need to listen less to vaulted voices and listen more to the “strangers” around us.
There is currently a robust dialogue occurring over a proposed increase of coal transport and exportation through communities along our rail lines and shorelines here in the Northwest. I want to learn directly to what local peoples think about this. Starting in August, I will walk for several weeks along the proposed route, from towns in Montana down through the communities of eastern Washington’s expansive grasses, further down along the Columbia and then up through the beautiful Puget Sound basin. I will walk to listen to local folks talk about their lives and these trains and I will broadcast the entire experience 24/7 online. I seek your support and invite you to come with me on this journey.
“Light On The Corridor” Benefit Brunch. Sunday, July 7th, at 11 am at Media Island (816 Adams St SE). Tasty food and enticing conversation. Come to where the food is as good as the fun!
Matt Fu is a member of the Olympia community and a recent Evergreen grad in ethnography and media justice with a renewed sense of urgency to throw his skills into the awareness, education and outreach needed surrounding the great environmental issues of our times.

Next:
In 2011 President Obama signed the controversial Budget Control Act…