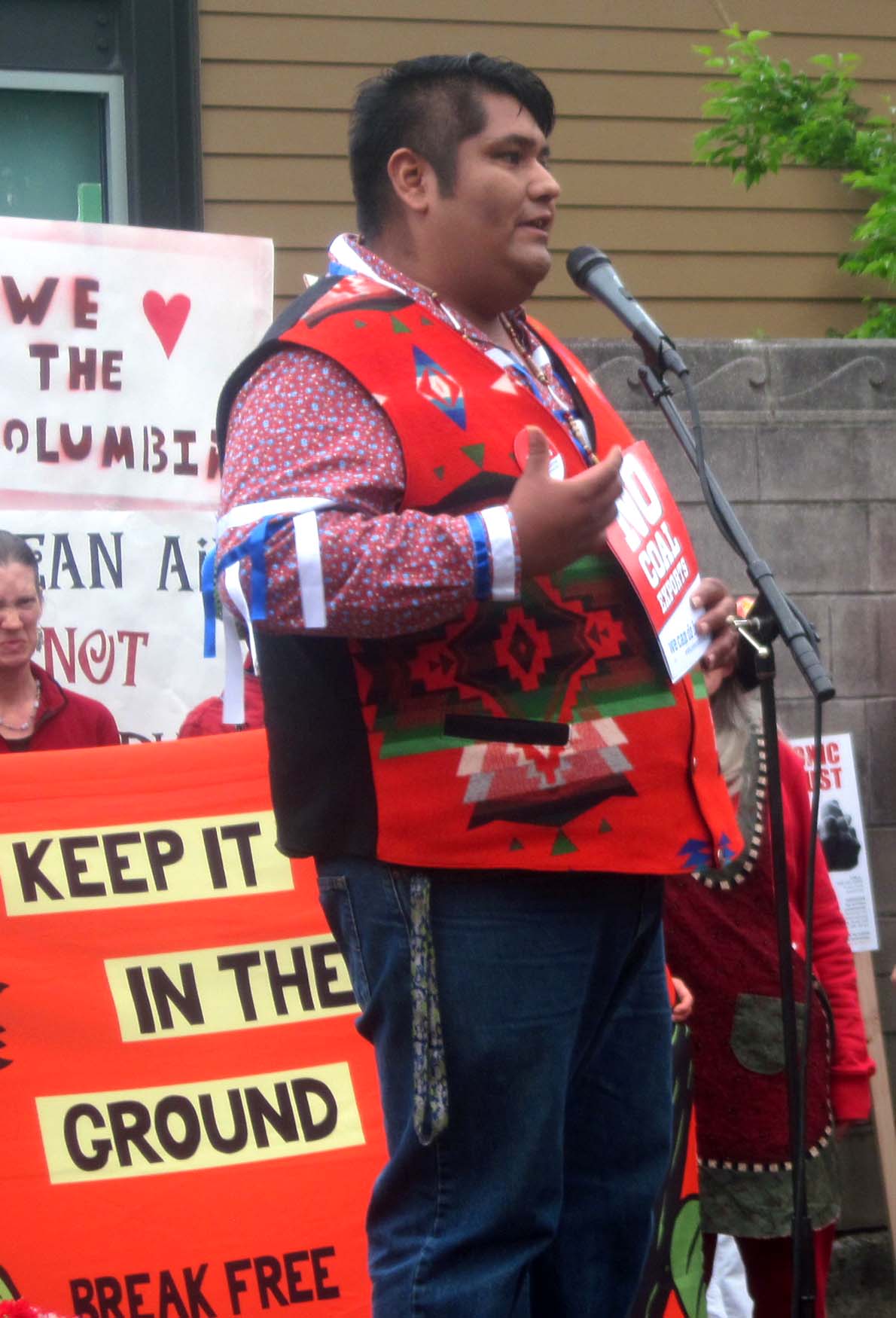 Wendy Tanowitz went to the hearing in Longview Tuesday, May 24, in which officials from Cowlitz County and Ecology heard testimony on the DEIS for the proposed expansion of the Millenium Bulk Terminal. Thousands were in attendance. She took the following photos.

According to Sarah Grothjan and Marissa Luck of The Daily News, “the $680 million Millennium terminal would ship 44 million tons of Rocky Mountain coal to Asia annually from the old Reynolds Metals Co. plant west of Longview. At its height, the project would see eight trains per day, each carrying 125 cars full of coal, travel through the Columbia River Gorge and Vancouver, with many if not all of those trains making a return trip through Clark County.”

This young man rocked the crowd with his eloquent plea on behalf of the world’s children, who will be living with the consequences of climate change.

Aji Piper, 15, of Seattle, is one of 21 plaintiffs in a successful lawsuit against the State of Washington’s Department of Ecology brought by Our Children’s Trust.

In Seattle on April 29, in a surprise ruling from the bench in the critical climate case brought by youths against the State of Washington’s Department of Ecology (“Ecology”), King County Superior Court Judge Hollis Hill ordered Ecology to promulgate an emissions reduction rule by the end of 2016 and make recommendations to the state legislature on science-based greenhouse gas reductions in the 2017 legislative session. Judge Hill also ordered Ecology to consult with the youth petitioners in advance of that recommendation. The youths were forced back to court after Ecology unexpectedly withdrew the very rulemaking efforts to reduce carbon emissions the agency told the judge it had underway. This case is one of several similar state, federal, and international cases, all supported by Our Children’s Trust, seeking the legal right to a healthy atmosphere and stable climate. www.ourchildrenstrust.org

“Anyone who says we can’t have economic development while protecting our land, water, and culture isn’t trying hard enough.” –Alaina Buffalo Spirit

Ray Estrada, Yakama Nation, Celilo Village, The Dalles, Oregon, said that diabetes used to be the
most common illness on the reservation but that now cancer has taken over as the
leading cause of death.

Next:
Tacoma Author: Let me tell you a bit about my…