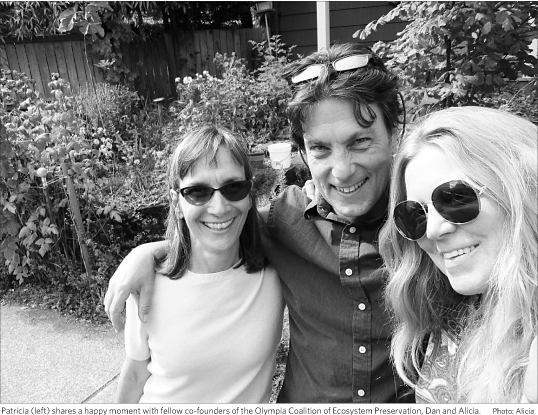 Local activist will be remembered

On Saturday, February 21, Patricia Pyle died unexpectedly. The cause of death was acute leukemia, which until just hours before her passing, neither she nor anyone else knew she had. The last couple of years a degenerative neck condition had caused increasing pain. Very sadly in retrospect, it seems the condition had probably clouded the symptoms of the aggressive, acute leukemia. The diagnosis was shocking to her and her family; however it now shines a light on why Patricia’s pain had increased and her fatigue had become immense those last couple weeks.

While living in Olympia, since the spring of 2002, Patricia was a City of Olympia senior program specialist with the Storm and Surface Water Utility section and helped edit the StreamTeam newsletter.

A few of the ways she served this community voluntarily: she was a founding member of the South Sound Estuary Association and the Olympia Coalition for Ecosystem Preservation, a member of the Native Plant Salvage Foundation, Deschutes Estuary Restoration Team, and the South Puget Environmental Education Clearinghouse (SPEECH). Recently, she joined the Port of Olympia Citizen’s Advisory Committee.

Patricia moved here from Baltimore, Maryland with her husband Dennis and their daughter Raven and son Liam. Her constant, intensive efforts and dedication to bettering especially the ecological factors surrounding this community is quite remarkable. Clearly, it was her life work.

Patricia will be terribly missed by her family both here and in Baltimore where her sisters and mother live, and by many in the Pacific Northwest community.

May you rest peacefully, Patricia.

Next:
The following is Daniel Einstein’s statement at Patricia Pyle’s memorial…