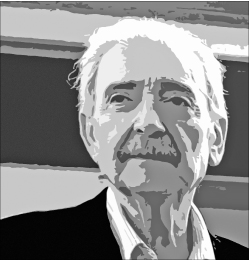 The Latin American poet Juan Gelman died January 14. He is little known within the Republic of Letters and the literary “salonniers” of the English word in spite of being the winner of many international literary awards, including the Cervantes Prize in 2007  (the most prestigious award in the in the Spanish language), and his regular appearance on the lists of potential Nobel- laureates not to mention his immense popularity in Latin America—comparable to that of Borges, Neruda, Nicanor Parra, Garcia Marquez, Cortazar, Onetti, Paz, Fuentes, Galeano, and so many others.

From the beginning, Gelman’s poetry was characterized by a profound lyricism and an unorthodox fluid movement between the personal and the socio-political.  After the government killed his son and daughter-in-law, his poetry became a strong and direct indictment of the Argentinean Junta and the rest of the military governments that during the “Lost Decade” of the 70’s to early 80’s ruled Latin America. His voice was a voice against the “Dirty War”—a voice against the killing and “disappearance” of more than 30,000 young Argentineans, a voice in defense of the left, democracy, and humanist values in the continent. His voice was the voice of hope in spite of the suffering and grief. A voice of hope for a generation who had been politically defeated.

that’s why some think

that known grief is better

they believe that hope is an illusion

they are deluded by grief

Latin American cultural life would be difficult to understand if we ignored the role of left wing politics among its intellectuals.  Left wing politics strongly permeates Latin American literature, its pictorial arts, its cinema, its architecture, its education theory, etc. It may be news for the average reader in the U.S. to realize that the political theory connecting all these cultural expressions is Marxism. The current progressive governments of Venezuela, Chile, Ecuador, Uruguay, Bolivia, Brazil, and Gelman’s own Argentina, prove that Latin Americans continue exploring forms of resistance to capitalism. And in spite of Marxism’s regional variations and the numerous death certificates freely extended to it by the mortuary homes of capital, Marxism continues to offer valid tools for the analysis of the capitalist system and the understanding of the narratives of history. Intellectuals in Latin America, including poets, continue to study Marxism because it offers tools with which to envision and enact political change.

“ The universe writes from the depth and breath of time. Miserable and poor is the human being who never gets to read that writing”  -Juan Gelman

Poetry was for Gelman, as murals were to Siqueiros, Orozco y Rivera, as music for Violeta Parra y Victor Jara, as movies for Gutierrez Alea, an artistic choice to critique a system that through history had and continues to generate inequality, war, poverty, and suffering for most people in the planet. Gelman saw literature not as directly subordinated to politics, nor did he subordinate politics to literature. The depth of his work, like so many other Latin American writers and artists, reflects his active involvement with politics and with his art. While there are numerous exceptions in the American literary world (Marge Piercy, to mention one), progressive politics seems to be mostly absent in the American literary narrative, where themes of identity and unending introspections in search of the self take priority over the inventing, imagining, or making of a better world.

Poetry for Gelman was an art that did not belong to him:

The Art of Poetry

Of all trades, I’ve chosen one that isn’t mine.

it makes me work day and night,

in pain, in love,

out in the rain, in dark times,

when tenderness or the soul opens its arms,

when illness weighs down my hands.

The grief of others, tears,

promises in the middle of autumn or fire,

kisses of reunion or goodbye,

everything makes me work with words, with blood.

I’ve never been the owner of my ashes, my poems,

obscure faces write my verses like bullets firing at death.

Next:
Scientists love a good idea. If you want to please…