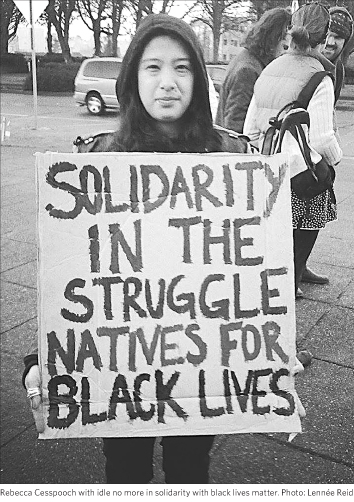 Injustice and the silencing of indigenous voices

There have been escalating chants from the two opposing parties that have gathered at protests around the country and across social media — one camp shouting “Black lives matter,” the other insisting “all lives matter.” These voices can be heard bickering amongst themselves about the verbiage of their respective mantras while at the same time joining in solidarity against their common enemy: the trigger-happy police state.

From the outrage over Trayvon Martin’s murder in 2012 to the widespread media attention given the Ferguson shooting, our country is finally addressing the festering issue of racially-driven crimes by police officers.

When asked what minority groups are most persecuted by law enforcement in the United States, most people would attest to what seems to be the obvious: black and brown people (in this case, “brown” meaning of Hispanic origin). In terms of sheer numbers, this is an undeniable fact: people of black and Hispanic ethnicities occupy almost 60 percent of the total prison population, with blacks taking up a staggering 40 percent, according to the US Census Bureau. On a global scale, the United States is the world’s top jailer, with approximately 1.6 million people incarcerated as of 2010.

This summer, the Center for Juvenile and Criminal Justice published a report titled “Who Are Police Killing?” that reveals “the racial group most likely to be killed by law enforcement is Native Americans, followed by African Americans, Latinos, Whites, and Asian Americans.”

On October 15, 2012, Corey Kanosh, a 35-year-old member and respected artist of the Paiute Tribe of Utah was shot and killed by Millard County Sheriff’s Deputy Dale Josse. More than two years after Kanosh’s murder, it is hard to find any coverage of the story, besides the initial one run by The Salt Lake Tribune shortly after the incident.

Recently, alternative news sources have shone a light on Kanosh’s murder as his family tries to raise money to fund legal proceedings. His sister Marlee Kanosh Shallenberger runs a GoFundMe.com account as well as a Facebook page to foster awareness of her brother’s case, which outlines 15 suspicious details about Josse’s pursuit of Kanosh on that fateful night, including multiple inconsistencies as well as questionable evidence.

In an even more barbaric and distressing case of police injustice, an 8-year-old girl belonging to the Rosebud Sioux community was senselessly tasered October 2013. Her furious family is awaiting justice while the innocent child receives psychiatric and emotional counseling.

There are reports of rapes of Native women, such as the case of Lisa Marie Lyotte of the Rosebud Sioux Reservation. After a harrowing ordeal of home intrusion and sexual assault, her shaken message to her local police department went unanswered. “Nationwide, an arrest is made in just 13 percent of the sexual assaults reported by American Indian women, according to the Justice Department, compared with 35 percent for black women and 32 percent for whites,” reports The New York Times.

The recent suffering of indigenous peoples spans more appalling social issues than the epidemic of excessive police force. Soon 2,400 acres of sacred Apache land in Arizona will be sold to a foreign copper mining corporation per Congressional vote.

Still, these stories have garnered little attention in the shadow of the Black Lives Matter movement. Even under the mantra All Lives Matter, how many American citizens, desensitized and far removed from the massacre of indigenous peoples, would remember to include the injustices against Native Americans when assessing the growing problem of police brutality? Before I moved to the Pacific Northwest, I never gave a thought to the existence of Native Americans in our country, much less to their maltreatment and disadvantage. Now, as I stand shoulder-to-shoulder with indigenous peoples in my community, and witness the abominable crimes and everyday discrimination committed against them, I cannot help but question why we as Americans still insist on ignoring these atrocities.

The truism is that all lives do matter, of course. But what of those lives whose ancestors tilled our soil long before blacks or whites called America their home? Over 500 years later, why do the repulsive crimes committed against them still generate barely a blip on our collective radar? Do their marginal existences on the outskirts of American society somehow render them less important to our society than minority groups who came long after? Or is it our responsibility to finally give voices to those who are silenced?

Bianca D. Velasco is a freelance writer, rogue scholar, and East Coast transplant to Olympia. Her passions are philosophy and the dissemination of information in a spirit of intellectual inquiry; she also abhors fascism in all of its insidious disguises.

Next:
Today I defect and join the squirrels They live in…