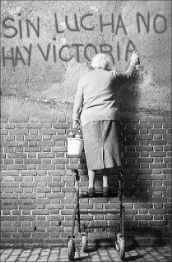 Increasing minimum wage–necessary but not sufficient

“Equality matters because human beings are creatures that thrive in societies where we are treated more as equals than as being greatly unequal…We work best, behave best, play best and think best when we are not laboring under the assumption that some of us are much better, more deserving and so much more able than others. We perform the worst, are most atrocious in our conduct, are least relaxed and most unimaginative in outlook, when we live under the weight of great inequalities—and especially under the illusion that these are somehow warranted.” –No Nonsense Guide to Equality

New Jersey voters approved a ballot measure to raise the state’s minimum wage to $8.25 in 2014. California approved an increase to $10 an hour by 2016, and the Jackson Rancheria Band of Miwuk Indians in Amador County, CA adopted an even higher minimum wage– $10.60 an hour beginning in 2014. Seattle’s new city council has agreed to study increasing the minimum wage within the city to $15 an hour. According to an AP report, minimum wage legislation and initiatives are active in at least thirty-five states.

At the federal level, the Fair Minimum Wage Act sponsored by Senator Tom Harkin (D-Iowa) and Representative George Miller (D-California) would raise the federal minimum wage from $7.25 to $10.10 per hour and tie subsequent increases to the cost-of-living index. President Obama supports the bill, which has yet to be approved by Congress. The federal minimum wage was at $5.15/hour for ten years until Congress passed the 2007 Fair Minimum Wage Act, which raised the minimum wage to $7.25 by 2009. There it has stayed. President Obama used an executive order to raise the minimum wage to $10.10 on new federal contracts beginning in January 2015.

Why is all this happening now?

Inequality has never been greater in the U.S. than it is today, and never before has the illusion of the American Dream been so well documented. The Economic Opportunity Institute’s report, “Chutes and Ladders,” states that a third of American families experienced unemployment for six months or more between 1999 and 2009. Reporting on the Pew Charitable Fund project on economic mobility, Erin Currier describes “stickiness” in the economy: “Americans raised at the top or bottom of the economic ladder are highly likely to stay there as adults, a phenomenon called ‘stickiness at the ends.’ Seventy percent of children raised in the bottom fifth of the income distribution will remain below the middle of the income ladder as adults. Among children raised in the top fifth, 63 percent will never fall below the middle. This stickiness challenges the notion that the United States promotes equality of opportunity.”

Increasing the minimum wage is a good and necessary strategy, but it doesn’t do all the work of moving us towards greater equality. The challenge lies in supporting increases to the minimum wage while advocating for broader-based strategies to reduce inequality. To use a popular term, we need to make sure that the “Overton window”—the window of politically acceptable ideas—opens a little further.

“In addition, the legislature finds that no school district employee who works full time should live in poverty.” HB 2608

Besides proposing an increase to the minimum wage, the House Labor and Workforce Development Committee also passed HB 2608 which would raise the minimum wage for school employees, including paraeducators, bus drivers, food service workers and custodians, to $15/hour in January 2015. Increases each year after that would be tied to the rate of inflation. In the bill itself, the authors declare that “no school district employee who works full time should live in poverty.”

Which full-time workers should live in poverty?

If we assume that everyone who works full time should earn enough to support themselves and their families, we have to define what we mean by enough, and we have to define poverty. Both calculations are tricky.

The federal poverty guidelines are still based on a formula developed by Mollie Orshansky, a statistician with the Social Security Administration, in 1964. Orshansky based the formula on earlier work she did with the U.S. Department of Agriculture, calculating the cost of food. She knew that families at the time spent about a third of their monthly income on food. She pegged family income against the least expensive food plan developed by the U.S.D.A., and assumed that the remaining two thirds of a family’s income would be sufficient to cover all their remaining costs. Consequently, families, whose incomes were three times the cost of the least expensive food plan or higher, were considered to be above the poverty threshold. Families whose incomes were less than three times the price of the least expensive food plan were considered to be in poverty.

That basic formula hasn’t changed. We still calculate poverty in terms of the cost of food, even though the highest cost for families today isn’t food, but housing.

The Universal Living Wage Organization (universallivingwage.org) is arguing that we should index the minimum wage not to the cost of living but to the cost of housing. We should use HUD section 8 rental calculations rather than food to set a living wage. We could use the same formula to redefine the poverty threshold. Instead of using the cost of food as the basic third, we could use average rent.

Here’s what it would look like: In Thurston County, where the average rent for a one bedroom apartment is $720, a living wage would need to be around $25,920—$8640 for rent (one third) and $17280 for other expenses. That would require a wage of $12.46/hour, and the assurance of 40 hours a week of work, 2080 hours in a year. This is a sharp contrast with the current poverty threshold for one person, which is set at $11490. A person whose income was just above the threshold would be paying nearly 75% of their monthly income for housing.

As conversations continue about raising the minimum wage for workers, let’s push to be more systematic. For example, let’s make sure that all state workers earn a living wage—a task that needs to be taken up by state government and unions. If we use the living wage formula above, any worker in a classified position with the state whose salary falls under “range 32”—a negotiated wage for positions within that salary band—is potentially affected. This group of workers includes office assistants, fish hatchery technicians, digital printing operators, custodians, and agricultural inspectors—people whose work keep essential public functions moving.

Let’s increase the minimum wage for everyone, but let’s make sure our calculations about what constitutes a minimum wage are reasonable. We have to find a way to to factor in the real cost of housing. Raising the minimum wage is important, but not sufficient.

Emily Lardner teaches at Evergreen State College and co-directs The Washington Center for Improving Undergraduate Education, a public service of the college.

Next:
“It’s clear there are times where what is lawful is…