In pursuit of defunding the Olympia PD

One afternoon in August 1991, police officers barged into my aunt’s living room in Berkeley, California, pulled her out of her chair, and shoved her into her front yard where they beat her with their batons until she fell to the ground. As she struggled to breathe, they searched her home, dumping the contents of cupboards and drawers on the floor and rifling through closets. Her then 8-month-old daughter, whom she’d been breastfeeding when police arrived, lay on the living room floor crying. 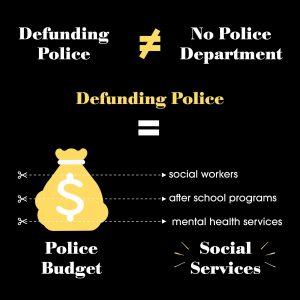 Eventually, they shoved my aunt back into her living room, where an officer yelled and hit her several times with his fist. In shock, she couldn’t understand what he was saying or what was happening. Then they went out to their patrol cars and drove away. It happened within minutes, but the bruises the police left on my aunt’s body kept her from sitting on the toilet for a week.

My aunt is a person who is Black, an immigrant from Mauritius whose first language is French. She was 37 at the time. Their suspect was an 18-year-old unhoused white woman with mental illness from Kentucky who police had encountered several times over the years. Later that day, she learned they had gone to the wrong house.

In my aunt’s case, the officers did not present a warrant. They did not charge her with a crime. They offered her $20,000 to settle out of court. A year later, they shot the young woman they’d been looking for three times, once in the back, killing her after she’d broken into a home. Her name was Rosebud Denovo. She was 19 years old.

Berkeley is arguably one of the most, if not the most, liberal cities in the U.S. So is Minneapolis. But this hasn’t made them immune to police violence. Since 2015, Bay Area police have killed 110 people. Black residents made up 27% of those killed, while they make up only 7% of the population, one of the largest such disparities in the nation.

It can happen here

As the struggle for racial justice unfolds in Olympia, my biggest fear is that too many people believe our city is too liberal for anything like what happened to my aunt or Rosebud Denovo or George Floyd to happen here.

Only a matter of time

First, it already has. In 2019, 14% of Olympia Police Department’s use of force was against Black residents. And 11% of people booked into City jail were Black though they represent only 3% of the population. Given this and officers’ lack of accountability, it is reasonable to assume it’s only a matter of time before Olympia police irreparably harm, or extinguish, another life. As James Baldwin wrote in 1966:

“the police are simply the hired enemies of this population. They are present to keep the Negro in his place and to protect white business interests, and they have no other function. …and, since they know that they are hated, they are always afraid. One cannot possibly arrive at a more surefire formula for cruelty.”

A long history of violence and racism

The problem of police violence spans centuries, administrations, and every direction across the country. Since their origins as slave patrols and gangs paid to quash organized labor, police departments have maintained and gained so much power they are all but untouchable. Despite their history of violence and racism, they enjoy almost complete immunity at the city, state, and federal levels.

While the finding of innocence for the cops who murdered Breonna Taylor is a gross injustice, no one should be surprised. Of the 6,249 killings by US police since 2013, roughly 2% have resulted in officers being charged with a crime. It would have been more shocking if justice were served.

For every person killed by police, many more are brutalized and survive. Studies show most excessive force, like that which injured my aunt, is against people who are unarmed and/or are experiencing a mental health crisis.

The only recourse left

Cities across the nation have started to embrace the need to defund their police departments as the only viable path to prevent more violence, as well as crime itself. And many are succeeding, including the Berkeley City Council who in July voted to cut $9.3 million from their police budget.

Councilmember and Vice Mayor Sophie Hahn said defunding the police is not a particularly radical idea, but a fiscally responsible way to shift how the city uses its valuable resources. The council is now developing a plan to redistribute the funding to programs and services that support BIPOC and reduce residents’ encounters with police.

Continuously increasing funds for the police

In 2011, the OPD budget was $13.1 million. In 2020 it has ballooned to $21.9 million—a 67% increase. Meanwhile, total calls for service, which are logged each time an officer responds to any situation while on duty, have increased by only 7%. According to OPD, they are more likely to receive a 911 call for found property than for any of the following: robbery, amber alert, abduction, abuse/neglect, assault, arson, auto theft, attempted crime, burglary, DUI, escape, fraud, harassment, physical control, reckless driving, sex offence, stalking, trespassing, or vandalism.

At the same time, 5% of our 2019 police budget, or $1.1 million, was spent on overtime. Starting salary for officers fresh out of training, with no education requirement beyond what the police tailor for themselves, is $76,000 per year, not including pension and other benefits.

More than all other department budgets combined

More funds are spent per capita on Olympia’s police department than on public works, parks, arts, recreation, community planning and development, and general government combined. Despite there being no correlation between an increased investment in policing and reduction in crime, one third of our entire city budget, per capita, is spent on police.

In addition to Berkeley, more than a dozen cities across the country have begun to halt the unchecked flow of taxpayer money into their police departments’ coffers. City councils are working with activists, who deeply understand their communities’ needs, to redistribute funds to affordable housing; job training; education; healing space for Black, Indigenous, and communities of color; and other programs that support residents. We have several models to pull from and many strategies to employ.

Finally begin to address the needs of other workers

In Olympia, the first step should be to address urgent needs BIPOC and other oppressed and vulnerable community members are experiencing. While OPD officers enjoy comfortable salaries, pensions, and automatic promotions with pay increases, many of the people they police are suffering from years of unaffordable housing, stagnant wages, and lack of access to healthcare, now compounded by the COVID-19 pandemic. Black, Indigenous, and People of Color (BIPOC) residents have the additional impact of daily racism to deal with, including racial profiling by police and all the associated fines and legal fees, going back generations. For this and other obvious reasons, a reparations program should be a central part of any defunding effort.

Seek leadership from those impacted by police violence

In their 2020 Blueprint for Police Divestment, King County Equity Now recommends inviting and paying BIPOC, Transgender, houseless, disabled, poor, and other residents most impacted by police violence to lead a community research process. The process would center on learning from Olympia residents what needs could be met with dedicated long-term funding redistributed from OPD’s budget.

They also advise money be distributed to organizations that are already equipping Olympia citizens with skills to increase public safety, including non-armed crisis response, violence interruption and prevention, harm reduction, and restorative and transformative justice approaches to harm as well as approaches to serving and addressing homelessness. Regardless of how the work gets done, BIPOC should be at the head of the table with decision making roles throughout the process.

It is THE issue of public health and safety

Many people see defunding the police as a political issue. It is not. It is an issue of public health and safety. People like my aunt do not get to choose whether their lives are going to be shattered one day by violence at the hands of the police. Defunding the system that has shown itself incapable of stopping the violence it perpetrates while remaining above the law is our obligation as fellow human beings.

To join the local effort to defund OPD, email info@olydsa.org. To get involved in local racial justice and equity work, email Amplified Voices of Olympia at amplifiedvoicesoly@gmail.com.

Eleanor Steinhagen has lived in Olympia for 11 years. She works in communications 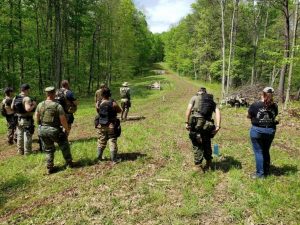