A state that deprives some people of equal rights and privileges can not call itself an egalitarian, democratic state.  Yet we’re taught that a commitment to equal rights and democracy is exactly what makes the United States “exceptional.”

So the dissonance between the practices of exclusion that were defining aspects of the early United States (and the European project of which it is a part), on the one hand, and the soaring rhetoric of democracy, on the other, had to be addressed.  The way it was addressed was to define some people as “subpersons,” as less than human.  Once that is accomplished, then any injustices visited upon these lower creatures would not be moral crimes, but would simply be the necessary actions of superior beings as they imposed order and justice upon the inferior species.

We don’t need to think about those other “people”

This is not only a historical problem.  The idea that some people are not really people is still with us, and it’s wreaking havoc on people of color throughout the world and here at home.

Consider the innocent victims of US drone strikes in Iraq, Yemen, Afghanistan and elsewhere, the scanty coverage of which (if they are covered at all in this country), would be inconceivable were the victims white.

The racial “otherness” of the major targets of US military might—Iraq and Afghanistan—is used to justify US failure even to count the innocent victims.  Or the not-so-innocent, for that matter.  The European colonial project of “civilizing” native peoples in order to elevate them from their savage state has strong echoes in the modern era when US military might is seen as one side in a “battle of civilizations.”

that’s why the Black Lives Matter movement and the indigenous resistance to the Dakota Access Pipeline project, centered in North Dakota, are so threatening.  By questioning the very basis of the racial and economic ideology of the dominant (white) culture, these movements are demanding that we “rethink everything.”

Here at home, examples of the tragic effects of the ongoing dehumanization of people of color are endless.  One example: When testifying about his 2014 shooting of black teenager Michael Brown in Ferguson, Missouri, officer Darren Wilson said that Brown looked “like a demon” to him.  The defense, apparently, is that shooting a “demon” is different than shooting a human being.

Another example: When Hillary Clinton referenced in 1996 “kids that are called superpredators — no conscience, no empathy,” everyone knew she was talking about black kids.  Locking up a superpredator is different than locking up a human being.

The historical European imperialist project required the subjugation, enslavement, and murder of untold numbers of people whose existence as people stood in the way of white European dominance in the emerging global order.  The horrors were so great, caused so much cognitive dissonance, and were so difficult to justify, that the victims had to be reduced to “subpersons;” to something less than human.

Just because the world is different, do we have to rethink everything?

Eventually an entire thought system evolved with “the ironic outcome that whites will, in general, be unable to understand the world that they themselves have made.”

This observation is from Charles W. Mills, who adds,

One could say, then, as a general rule, that white misunderstanding, misrepresentation, evasion, and self-deception on matters related to race are among the most pervasive mental phenomena of the past few hundred years, a cognitive and moral economy psychically required for conquest, colonization, and enslavement.  And these phenomena are in no way accidental, but prescribed by the terms of the Racial Contract, which requires a certain schedule of structured blindnesses and opacities in order to establish and maintain the white polity.

What Mills calls “pervasive mental phenomena” I call a Thought System.  And while Mills speaks of matters “related to race,” the problem with a thought system is that, regardless of the conditions from which it has arisen, it ends up shaping our thinking about everything.  At the core of our blindness and confusion is an idea called Individualism.

In an earlier edition of Nygaard Notes I quoted Mills saying that “The simple central innovation is to posit a group domination contract which is exclusionary rather than genuinely inclusive, and then rethink everything from that perspective.”

The key word here is “group.”  Mills is saying that, once we move away from an individualistic thought pattern, the world looks different.  But does he really mean we have to rethink everything?  I think he does.  That’s certainly what I mean!

“Individualism – at the very core of American culture”

In his book The American Ideology, political scientist E. C. Ladd states that “The American Ideology is ‘liberal individualism.”  That is, it originated in European liberalism, with its emphasis on property rights and limited government. . . .  At the heart of what resulted was an extraordinary and far-reaching individualism, which pervades and shapes all of the other components of the core American values, giving them their distinctive cast.”

The authors of the book Habits of the Heart, put it more simply, saying that “Individualism lies at the very core of American culture.”

is a specific set of ideas, words, symbols, and metaphors—a storyline or narrative—that creates, communicates, reproduces, and reinforces the concept that each of us is a unique individual and that our group memberships, such as our race, class, or gender, are not important or relevant to our opportunities.

Of course, each of us is a unique individual.  But we are individuals who exist in society, where power is unequally distributed.  And it’s not only our opportunities and security that are affected by our location in the social structure.

Many of our thoughts and ideas are imposed on us, or inherited from those who came before us or are in other ways socially constructed.  This is the case with the idea of Individualism, which ironically denies, or at least minimizes, the social aspects of our personalities and our mental processes.

Why is Individualism so deeply-rooted in US culture?  It certainly has to do with race, but the deeply-embedded ideology of Individualism shapes our thinking about so many things.  We can’t, after all, think one way about some issues and another way about others.  Journalists functioning in an Individualistic culture, for example, see and report things in certain ways.

What we get are endless debates about who is to blame for something, or which politician or executive can “turn things around,” or who is a “strong leader.”  What we almost never get—due in large part to this unconscious bias towards the individual—is a serious discussion of how systems and institutions work, and how they have lives of their own.

The ideology designed to justify conquest is still powerful

Here we come full circle.  White people create a thought system meant to obscure the reality of the crimes committed during the Age of Conquest (and continuing).  Centuries of struggle by the victims of the conquest meet with some success, but the basic ideology (at the core of which is Individualism) survives, and is wielded as a weapon to deny the reality of those most affected by the truths behind the myth.

Either “rethink everything” or deny the future

More irony: The most ignorant are at the same time the most powerful, since the system was set up to benefit them.  And that’s why the Black Lives Matter movement and the indigenous resistance to the Dakota Access Pipeline project, centered in North Dakota, are so threatening.  By questioning the very basis of the racial and economic ideology of the dominant (white) culture, these movements are demanding that we “rethink everything.”

All of this is highly relevant to the hateful and xenophobic “movement” ignited by the Donald Trump campaign, and helps to explain why it has so much energy behind it.  The call to “Make America Great Again” has less to do with traveling back to the past than it has to do with denying the future.

The Census Bureau projects that the white population will make up less than 50 percent of the UD sometime around the year 2045.  That can’t be stopped, and white people fear (perhaps rightly) that as the demographics change, the increasingly-visible cracks in the wall of ideology that has protected white people may cause the wall to collapse completely, with results that are impossible to predict.

Rethinking individualism in pursuit of a new consciousness

How history will view the current period won’t be known until long after we’re gone.  But I believe that, at this historical moment, what we are witnessing may be a fraying of the global system of white supremacy that was erected over more than five centuries.  The transition to what comes next won’t be easy—there’s great conflict already—but in order even to begin to understand what is happening, and what we might do, we need to challenge the prevailing Individualistic Thought System, and learn to think in new ways.

This essay was published with the title “Race and Individualism” in Nygaard Notes, an independent newsletter written and published by Jeff Nygaard (subscription info here). It’s part of a series illuminating the function of individualism in justifying and preserving white western dominance. Nygaard Notes offers informed and entertaining essays on a broad variety of current issues. 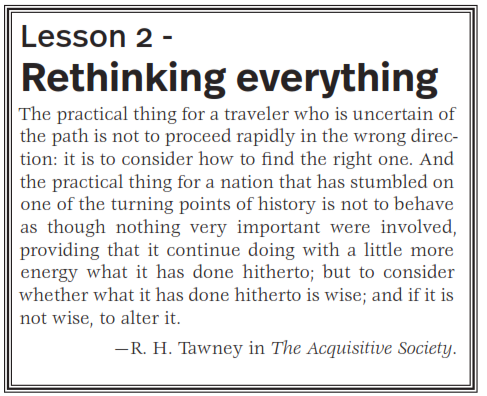