How unions can solve the housing crisis

Dr. James Peter Warbasse wrote in the journal Co-operation, “Once the people of New York City lived in their own houses, but those days have gone. … The houses are owned by landlords who conduct them, not for the purpose of domiciling the people in health and comfort, but for the single purpose of making money out of tenants.” That was in 1919.

A century later, things have gone from bad to worse. A quarter of US households pay more than half their income in rent. In New York City, homelessness has hit record levels.

Most activists can reel off a list of demands to address the housing crisis: rent control, community land trusts, affordable housing development. But one of the most effective strategies has been forgotten. A century ago, the labor movement in New York City planned and executed a bluntly practical solution to the problem of housing: Build it.

Today, more than 100,000 New Yorkers live in apartments built by the labor movement between 1926 and 1974, mostly through an organization called the United Housing Foundation. Roughly 40,000 still-affordable cooperative housing units—Amalgamated Houses, Concourse Village and Co-op City in the Bronx; Penn South in the heart of Manhattan; 1199 Plaza in East Harlem; Rochdale Village and Electchester in Queens; Amalgamated Warbasse in Brooklyn—stand as monuments to what an organized working class can achieve. This housing provides a bulwark against gentrification and a blueprint for ending the housing crisis. Let’s look at how it all got started, how it came to an end and what it would take for labor to build again…

Destroying the tax base of a city

Since World War II, New York City’s labor movement had won something approaching social democracy at a municipal level. The city government sponsored a miniature welfare state, complete with free higher education at the City University of New York, an affordable and functional subway system, controlled rents and more. But as deindustrialization and white flight hollowed out the city’s tax base, the municipal government turned to the private bond market and the federal government to cover a mounting deficit. This assistance gave an opening for enemies of labor on Wall Street and in the federal government to attack.

In 1975, Wall Street orchestrated a capital strike, blocking the city’s access to bond markets and forcing it to hand over control of its budget to an Emergency Financial Control Board made up of corporate and banking elites. Implementing a “shock treatment” of austerity that echoed policies of Chilean dictator Augusto Pinochet, the board imposed tuition at the City University of New York, laid off thousands of public servants, hiked the subway fare and attempted to do away with rent control.

Under this dictatorship of capital, backing loans to the labor movement for cooperative development was out of the question. The role of government would now be to woo the global rich with tax cuts and luxury developments. Emblematic of this shift, even as Co-op City was fighting for state support, the city granted a young Donald Trump an unprecedented 40-year tax abatement to turn the Commodore Hotel into a Hyatt. As historian Joshua Freeman put it, New York City was now Trump City…

Recovering the initiative to build

The ensuing decades saw more of the same, and today a new addition to Trump City is under construction: Hudson Yards, a luxury development meant to create investment properties for the global rich. Its towers stand in stark contrast to the nearby Penn South, union-built with city support so that garment workers could walk to work. Hudson Yards has received a 19-year tax abatement and is being funded in part by up to $3 billion in city-issued bonds. If the development is not profitable, the city has agreed to pay the interest to bondholders out of tax revenue. In other words, while the city fails to guarantee housing for the working class, it guarantees profits for the ultra-rich.

Predictably, the developers are seeking to build as much as possible with nonunion labor, provoking a showdown with New York City’s building trades. Tagged as the #CountMeIn movement, a drumbeat of job actions is intensifying at Hudson Yards, with weekly pickets and the beginnings of a guerrilla war of walkouts and slowdowns. Sadly, the trades are divided. The United Brotherhood of Carpenters invested in the construction of one of the luxury towers, and the union does not support the protests—though increasingly rank-and-file carpenters are joining the movement.

There is deep irony in union funds building nonunion housing that most workers will be unable to afford. Labor is quite literally investing in its own destruction.

It doesn’t need to be this way. Most of the necessary conditions for unions to develop housing are in place. The city is seeking affordable housing developers for parcels of land across the boroughs. Financing is available through Low Income Housing Tax Credits and union pension funds invested in the AFL-CIO Housing Investment Trust. And the state still grants tax abatements for affordable housing developments.

The 40,000 units of housing built by UHF are the embers of a vision that once fired the labor movement: Build for human need, not for profit. The working class needs housing now more than ever. Labor can build it again.

Erik Forman has been active in the labor movement for over a decade as a rank-and-file organizer, at the forefront of campaigns to unionize the US fast food industry.    This article is excerpted from a much longer article that appeared in In These Times September 23/October 2018 issue.  It is available on line at http://inthesetimes.com/features/unions-housing-crisis.html 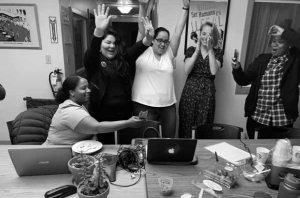