Most people who saw Sergio on the streets of Olympia would only see the little man, the homeless, disheveled man, the sick man, and probably the migrant man—all labels that tend to 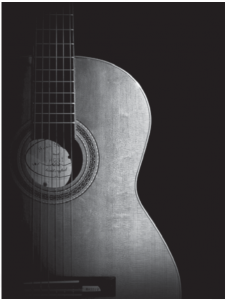 marginalize a person and make it easier to dismiss them. Saint Michael parishioners and supporters who prepared meals at the Interfaith shelter saw a different Sergio.

To them he was Sergio the great guitarist and vocalist who could sing a thousand different songs in English and in Spanish. He could play every Beatles song and sing them in both languages. He was the ultimate defender of the most vulnerable with a smile, an embrace, and a song for all in need of help.

When his guitar was stolen, the light in his eyes dimmed until Saint Michael parishioners got together and bought him a new guitar. The music returned to the shelter and to St. Peter’s Hospital where he was often a patient.

The St Michael staff surrounded Sergio with love, providing shelter meals, prayer shawls, clothing from St. Vincent’s—and a guitar to keep him playing. A few weeks ago Sergio passed away at the age of sixty–one. He was sitting in his wheelchair in a parking lot one block from the Interfaith Shelter. His guitar was in his lap.

I wish we could have done more to help Sergio, but I am proud of the many parishioners of Saint Michael Parish who came to Sergio’s aide.

I think your life was so hard

When it was over and you rose into that light,

was someone there waiting for you?

Was it such a relief to leave your amputated body

and be done with it all?

I didn’t know about your guitar and your music,

Just an idea of your years on the streets—

the night your toes froze in the cold

your months in the hospital.

I knew you as a gentle patient with a bandaged stump

who wanted a rosary and a cross

and put up with my mangled Spanish.