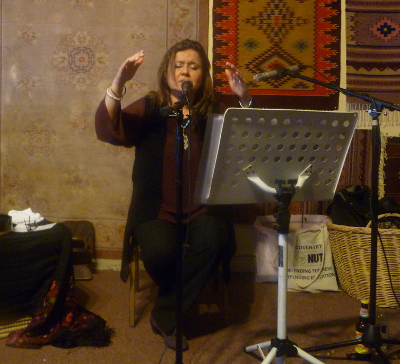 From the Soul, For the World: Reem Kelani performs in Olympia

The cozy interior of Traditions Cafe is almost full. The noises of people conversing fills the air as the stage and microphones are prepared. As seven o’clock rolls around, the lights are dimmed and someone gets onstage to introduce the night’s performer, Reem Kelani. She is a native of Kuwait, raised there but born in Manchester, England. The performance tonight is brought to Olympia by the Rachel Corrie Foundation, who have been trying to get her here for twenty years.

Reem begins her set simply by saying, “Don’t be scared.” It becomes obvious why as she begins to loudly and rhythmically stamp her feet and clap her hands. After this first song (an intense piece with minimal musical accompaniment) she tells the audience that it is an old Palestinian wedding song. This is typical of the rest of the evening. Kelani is as much telling stories at this performance as making music. Virtually every piece of the night is prefaced and expanded upon with both Kelani’s personal feelings and historical facts. The effect of such knowledge is profound. It transforms what would otherwise be simple bits of musical experience into equal parts folk tale and history. Every piece of music Kelani sings has a place in the world and in her soul, and she expertly imparts this onto her audience.

The fact that much of the performance is personal inevitably leads to personal opinions. Kelani does give her own political views during the show, but not in the form of a lecture or self-righteous tirade. They are simply given as facts that inform the music and her choices, and once again the audience is richer for it. It helps greatly that the show is not a somber parade of pain and suffering. It is rather more akin to a stand-up show. Kelani is not afraid to let humor flavor her ideas, in fact, it is a big part of the show. Throughout the night she asks the audience, “Is there anyone here from Spain? Any Arabic speakers?” When there are no audience members fitting the description she simply laughs it off. And she asks these questions for a reason. The night is filled with audience participation, whether that be simply clapping along or singing onstage with her. Combined with the storytelling and history provided, it ingrains the listeners into the world Kelani brings into being.

The music of jazz pianist Bruno Heinen bares mention as well. He accompanies her on all of her pieces during the night, whether on piano or drum. His skill on the keys deftly slips from classical jazz to Middle Eastern-inspired minor chords to 15th century troubadour. Heinen also becomes part of the audience participation of the night, as Kelani constantly apologizes to him for rambling, or encourages him to take the stage with her, or tells stories of his life and family. It truly comes off as unrehearsed (which it may well be) and adds further to the atmosphere of fun and personal storytelling of the show.

Kelani and Heinen’s musical variety shines throughout the performance. While all but a few of the songs are contemporary Egyptian or Palestinian, the differing styles make each one feel like an entirely different genre. And there are traditional songs like the opener, and even older ones dating back hundreds of years. The aforementioned humor is quite often there, but Kelani knows when to make things somber and quiet, such as during a piano backed reading of poetry.

Reem Kelani is currently working on her second album, dedicated to the work of Egyptian composer Sayyid Darwish, and she has worked with the BBC for “Songs for Tahrir.”

Next:
Bourtai Hargrove The amount of heat-trapping carbon dioxide in the…