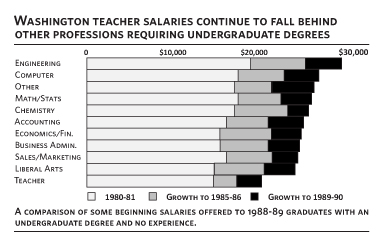 From our archives—June 1990: Washington fails its students

Every child in this country deserves the opportunity to develop to his/her fullest potential.

I believe in Education because I believe that children are our future. Consequently, I must tell you that children in this state are not getting the education they need and deserve. Not, as some would have you believe, by ill-prepared, uncaring, self-serving teachers, but rather by a system that hasn’t changed in 150 years. And, by some elected representatives who operate on the principal that “what was good enough when they were in school is good enough for students today.”

The fact is, everything has changed except the system intended to prepare children for the future.

The fact is, that at a time when children are at greater risk than ever before, we are actually doing less for them.

Let’s talk for a moment about the children we are trying to educate. Nineteen percent of the children under age 18 are poor. Along with insufficient funds they suffer from improper diet and a lack of medical care. We probably don’t know how many of our students suffer from physical or sexual abuse. We do know there were 43,000 cases of abuse and neglect reported in Washington in 1988. In addition, we are experiencing an epidemic in drug and alcohol abuse not to mention the potential entry of scores of “crack babies” into our school system. Gang related crime and violence is certainly on the rise.

I could go on and on, but I ask you, back in the “good old days” were these the kinds of students being educated in the public schools of Washington?

What are we doing to meet the demands placed on the system by the increased numbers of at-risk kids and what are we doing to provide the quality of education necessary for all children to reach their highest potential? In Washington we spend just over $4300 per student, per year, on education. That’s $170 below the national average. If that doesn’t seem too bad, consider that a teacher in Lincoln Elementary with 26 students (the state average) would have $4500 more spend on materials and supplies if we funded education at the national average.

Are we trying to improve this situation? Not when you consider that those per-pupil expenditures have grown in this state, over the past decade, at a slower rate than in any other state in this country.

If you think our national average is okay, consider that only two industrialized countries in the world spend less per pupil than the United States: Australia and Ireland.

And what about class size? In my own district for example, North Thurston High School was originally built for 1200 students. We are currently serving over 1700 students through the use of 24 portables. If teaching in portables isn’t bad enough, consider the effect on students and staff attempting to carry on educational activities in a core facility with 500 excess students.

The desire to provide meaningful educational experiences for students in overcrowded classrooms is the source of much of the frustration. For example, the teacher who needs to spend some quality individual time with students in a class of 32, will find each student will receive 7.5 minutes of individual attention, per week, if the teacher does nothing but move from one student to the next without ever teaching a lesson. Also, the teacher who gives a writing assignment to those 32 students and who wishes to give immediate feedback for maximum learning will find a need to go to the time store and buy a couple of hours.

Imagine yourself sitting down to proofread 32 essays. How much time do think it would take you?

What are we doing about class size problems? Funds for construction projects already approved in this state are virtually nonexistent. Our class size average is one of the 4 or 5 worst in the nation.

Is there any relief in sight? By 1992, sixty-five thousand new baby boomers will crowd our already crowded classrooms. By 1994, Washington will be able to fill only 1/3 of its teaching vacancies. We would need to hire 5,800 teachers right now to bring our teacher/student average up to the national average. The cost to reduce class size in k-12 by an average of four students per class would be $400 million for 1989-1990.

Is there any relief in sight? You tell me.

Let’s talk about the people who will be providing education in the future. It is estimated that there will be 3,000 teaching positions open next year. However, after talking with students in our college education programs I can tell you that not only are there too few people majoring in education, many do not plan to teach in this state. The problem is the cost of meeting certification requirements compared to salaries in Washington versus comparable costs in other states.

How, let’s look at the issue of salaries. Let me first say, I am not embarrassed to talk about salaries for educational employees. I believe the school employees currently working in our public school system are excellent. They are dedicated to their students almost to a fault. They may also be frustrated because of the roadblocks which prevent them from being more successful with every students.

Are our legislators trying to improve the situation?

In the 1981-83 biennium, nearly 51% of the state general fund went to public education. In the current biennium, just 46 percent is spent on public schools.

While we’re on the subject of statistics, let’s look at what kinds of statistics we should use. Legislators have told us our statistics are not valid. However, they are the same statistics used when we bragged about being 4th or 5th in the nation. The reality is that no matter whose statistics we use, educational funding is neither improving nor even maintaining the status quo.

I choose not to argue with any pseudo mathematicians but rather to continue to discuss the trend in education. That trend is down, even by Senator MacDonald’s statistics.

The legislature told us a year ago that we could not ask them to fix all educational problems at once. So, we narrowed our scope to include 1) compensation to encourage highly trained educational employees in the future, 2) appropriate class size to allow us to provide a quality education to all the students we teach, and 3) adequate retirement to maintain the quality educational staff we currently enjoy. Now those legislators, who told us we were too broad, are saying we are too narrow.

Let me close with an excerpt I borrowed from a speech given by former US Representative Mike Lowery recently. If, as has been reported, the United States is 13th out 17 industrialized countries in the world in literacy, and, if, as has also been reported we are 15th out of 17 in funding education, do you think the education governor of the state of Washington, as he has been described by the education president of the United States, or the education president himself might be able to figure out whether there may be a correlation here?

I’d say to them, take your time—how many generations can we give up before it’s too late?

Dennis Boulton was then president of the North Thurston Education Association.

Next:
To the Liberals, To the fence-sitters, To the Leftists who…