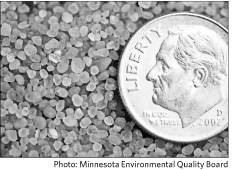 Feeding the beast in Wisconsin: Meeting the demands for silica sand

On the coattails of the hydraulic fracturing boom in the U.S. rides another rapidly growing industry….sand mining. Fracking uses ‘proppants’, which is particulate material used to prop open fissures. There are manufactured proppants composed of ceramic, but the preferred type is sand based. Indeed, the silica sand used for fracking is so instrumental that without it, the volumes of oil produced by such companies as Continental Resources, one of the biggest and oldest producers in the Bakken, and EOG Resources, a rising star in big oil, would likely never reach their heights.

Sand deposits are found in a number of states, but Wisconsin is sitting on some of the finest in the nation. The deposits’ close proximity to both the surface and rail infrastructure raises their desirability, and mining operations in the state have increased at an alarming rate. In 2010, there were five sand mines and five processing plants. Today, 132 mines are operational, 100 more are either waiting for approval or recently approved. As a result, the state once known for its dairy production is now seen as a leader in high quality frac sand, claiming 75% of the nation’s market.

Meeting the frac sand demands of the industry has become a challenge. PacWest Consulting Partners, based in Texas and specializing in energy, industrial and resource sectors, reported 2013 totals to be 56.3 billion pounds of sand. This figure is a 25% increase since 2011 and a another 20% rise is predicted over the next two years. The Marcellus Shale in Pennsylvania will require more than 13 billion pounds this year and 2015 projections are almost 15.8 billion. The Bakken in North Dakota is expected to consume 8.5 billion pounds of proppant by 2015, two thirds of which will be sand based.

EOG Resources uses approximately 3 million tons of sand per year, several thousand pounds per well. The company found a unique way to remedy its sand costs by self-sourcing its supply. Spending $200 million on two processing plants and three sand mines in Wisconsin, it now ships its own sand via BNSF and other railways to the Bakken and Eagle Ford in Texas. This helped to reduce its sand overhead. CEO Mark Papa, now retired, stated in a July 2013 article in Forbes magazine that “the only trouble is now our engineers think sand is free” as EOG’s engineers began to experiment with new techniques on the Bakken fields that almost double sand requirements. EOG plans on drilling 80 new wells on the Bakken in response to the successful technique that has boosted production.

Many residents in western Wisconsin who live among the booming sand minds would take offense at Papa’s statement, having incurred the very real costs that this deluge has on their lives and communities. Below is a growing list of concerns that Wisconsinites are facing, compiled by Earthworks.org.

State and local governments in Wisconsin find themselves at odds with each other when it comes to regulating sand mines. This causes even more confusion for residents in opposition to the industry. A new wave of activism has surfaced and networks have successfully raised awareness in order to deny passage of state legislation that would usurp local control. Yet, diligence is required as an economically depressed state struggling to get back on track often bows to the industry. With no end in sight to the excessive demand, activists have their work cut out for them.

Janet Carpenter is an organizer/writer from Wisconsin. She believes Olympia and Wisconsin have something in common in that we both experience the challenges imposed by big oil and its frac sand appetite.

For more information:
“The Price of Sand” is a documentary about the silica mining boom in Wisconsin and Minnesota and is directed by Jim Tittle. http://thepriceofsand.com

Wisconsin Network for Peace and Justice is a coalition of activist groups and citizens of conscience within Wisconsin. WNPJ facilitates activities, cooperation and communication among Wisconsin organizations and individuals working toward the creation of a sustainable world, free from violence and injustice. http://www.wnpj.org

WI Voices is a group of citizen journalists whose mission is to provide a stage for regular people to tell their stories about how they are affected by public policy choices. http://www.wivoices.org

Wisconsin League of Conservation Voters is a leading nonpartisan environmental and political organization fighting for air, land, and water by being a voice in the state Capitol, issuing the Conservation Scorecard, and electing pro-conservation candidates to office. http://conservationvoters.org

Next:
Brazil hosts 2014 soccer World Cup while the FIFA scores…