Exempting the wealthy and raising the property tax burden while flooding, choking and closing

With this motion, the Council approved an eight-year property tax exemption for Pat Rants’ 28 unit luxury condominium project at 320 Columbia in downtown Olympia with prices between $750,000 and $1.4 million dollars for each individual condo.

What did this mean for Pat Rants? It meant he would not have to pay property taxes for eight years on the building’s estimated housing value of $28,374,305. At the present millage rate of 12.26, this means he would not pay $2,782.921 in taxes over the next eight years. What does this mean to those who pay property taxes on our homes or in our rents? It means we would pay the $2,782,921.

How does the Council approve something like this in the midst of a homeless crisis, with rising downtown rents for low income and moderate income people?

This is how. Leonard Bauer, Deputy Director of the City’s Community Planning and Development department, explained it to Pat Rants in an email just before the November 27th vote. “Please note this item is proposed for the Council’s consent calendar, which is a list of agenda items that are more routine and not expected to generate debate among the council members.”

Even though any Council member could have moved Mr. Rants request to the regular agenda for a public discussion, no one did. There was no discussion, no debate. Exempting wealth was just “routine.”

However, more requests for your tax dollars are on their way to the Council. The 144 unit Harbor Heights Luxury residences near the Farmers market on Capitol Way have requested an eight year exemption. Walker John has four more that are no doubt headed for Council largesse: the 86 unit Westman Mills on 510 State Avenue NE, the 44 unit Market Flats at 312 Capitol Way, the 60 unit at State and Columbia, and the 44 unit Laurana at 210 State Avenue.

As we witness the gentrification of downtown Olympia with new publicly subsidized market rate and luxury housing for the City’s high-end clientele, there is another “routine” that is facilitating all of this. It has to do with the term “significance.”

I think most of us would say something significant is happening to downtown: exacerbation of homelessness in the midst of publicly supported luxury and market rate housing complexes. But, in fact, according to the Mayor and City Council, nothing significant is going on. It is all “non-significant.” The State’s Environmental Policy Act (SEPA) requires the City to make a “threshold determination” on development projects. The City could say a project will have a significant effect on the environment and therefore order a full Environmental Impact Statement (EIS). This Mayor and City Council do not see it this way.

The City’s Community Planning and Development department, headed by Keith Stahley and Leonard Bauer, has ruled that these downtown market rate and luxury housing complexes totaling 788 residential units with 743 on site spaces for cars and 90,000 plus square feet of associated new retail and commercial spaces packed into a downtown core have no environmental significance.

What is truly amazing is that while the Mayor and Council say there is no environmental significance to any of this, they ask the Legislature for funds because: “Olympia’s downtown is vulnerable to widespread flooding, choking vital transportation corridors and closing our business district.”

There is a new book by Indian author Amitav Ghosh titled “The Great Derangement.” There is no better example of this “derangement” than the City Council’s stoking of downtown building in the exact area vulnerable to flooding, choking and closing while at the same time acknowledging the dangers of climate change.

On July 10, 2019, the State’s Growth Management Board invalidated the Mayor and City Council’s unanimously approved Missing Middle’s 192 page Ordinance 7160. Even this Board, which is pro-growth and pro-infill, could not ignore the City’s inadequate “environmental checklist” in which Stahley and Bauer’s department replied “nearing 50 times with statements such as the question did not apply” to the Missing Middle ordinance.

Has the City ordered a new environmental checklist subject to public review and begun a rewrite of the Ordinance based on a new and accurate assessment of the Ordinance’s effects on neighborhood lot size density, stormwater run-off, parking congestion and neighborhood character? No. And there’s more.

Turns out the Mayor and City Council had been lobbying the State Legislature to pass a bill that would prohibit neighborhoods from appealing City actions, like the Missing Middle ordinance, to the State’s Growth Management Board. And they were successful with passage of ESSB 1923.

There seems to be little doubt that what Samuel Stein in his book, Capital City, calls the “Real Estate State” is in full control of our Mayor and City Council. Whether downtown with its tax exemptions or in our neighborhoods with their Missing Middle incursions, the current Mayor and City Council are not about housing as such, certainly not affordable housing, but about the turn over of land for the benefit of the real estate industry and their capital investors. 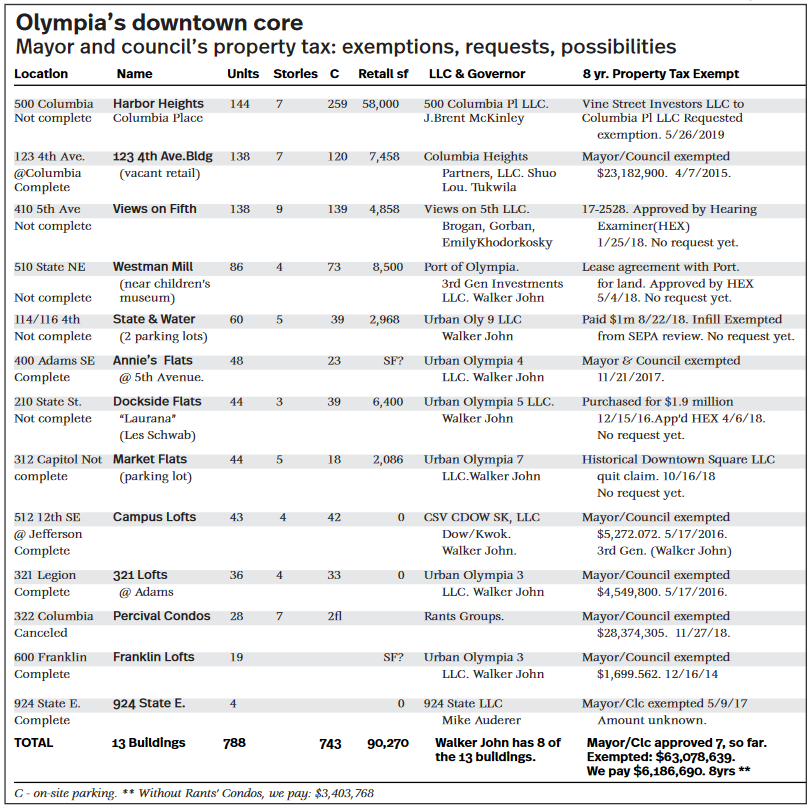 Dan Leahy grew up in the Irish-Italian-Hungarian working class neighborhood of Seattle’s Queen Anne Hill, now turned into a rich man’s automobile park with homes that rent for $4200/month or are bulldozed for four story, million dollar condos that no working class person could afford. It’s the working class who is now “missing.”