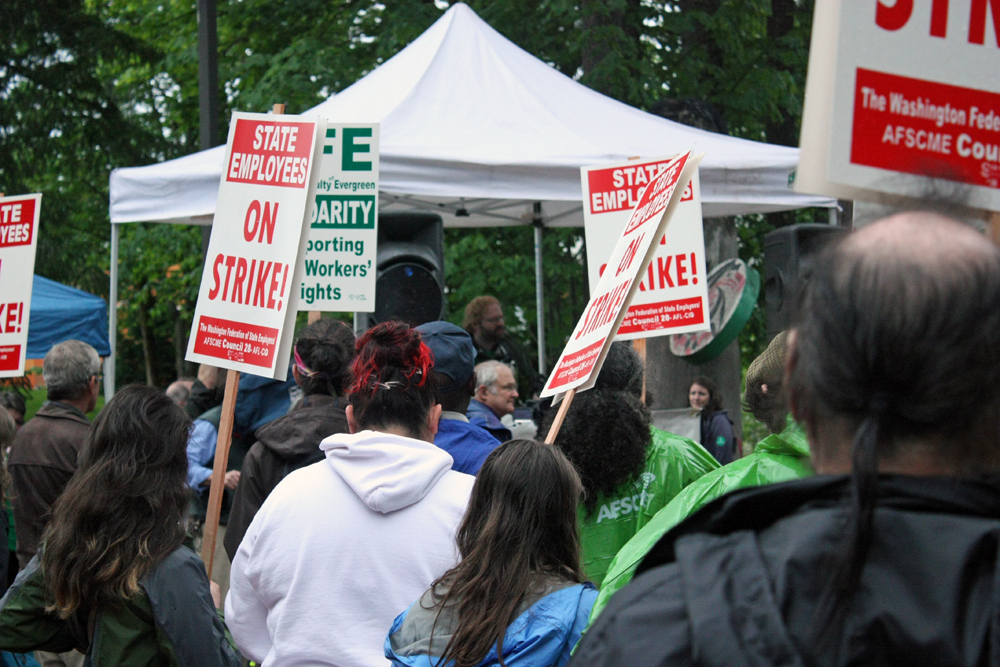 The Student Support Services Staff Union (SSSSU) of The Evergreen State College went on strike Tuesday, May 28, following a 45-5 Sunday vote for this action. The SSSSU represents over 50 workers at the college, including academic advisers, counselors, coaches, and more. They have been in negotiations mediated by the Public Employees Relations Commission for over 16 months before this strike. Their main concerns are fair pay (their members’ average salaries remain at 1992 state employee levels) and Just Cause protections. Just Cause refers to due process procedures written into a contract for the purpose of discipline and termination.

The strike began on Tuesday at 7:30 am with picketers lining the main entrances to Evergreen, as well as small pockets of picketers around other entrances. They held mass produced signs saying “State Employees on Strike!” and homemade signs with slogans such as “Fair Rights Right Now!” The members of the SSSSU were not alone in their endeavors. Several other unions and groups joined in solidarity with the strikers, and refused to cross the line. These included the UFE Faculty, WFSE/AFSCME Classified, ILWU, and union representatives from across the state, with UFE giving their full solidarity funding to the SSSSU. Due to these solidarity actions, classes were almost entirely off campus or canceled. The strikers lined the walkways, chanting over megaphones, and parting to let cars in after encouraging them to not cross the picket line and to attend the rally in Red Square.

The rally began at 11 am in The Evergreen State College’s Red Square, the large brick open area in front of the library and main entrance. By the time the first speaker took the podium there were well over a hundred people in attendance. Most numerous were UFE members, showing solidarity off of the picket line, but there were many other groups, with a number of Evergreen students among them. Speakers ranged, from members of the SSSSU such as Residential Directors, to members of supporting unions such as faculty, to even members of the Washington state legislation. Laurie Meeker, chair of UFE, took the podium at one point to address the crowd. She thanked everyone in attendance, and lead them to shout “Solidarity!” along with her, and encouraged them to stay until the strike was finished. Rep. Chris Reykdal, Olympia-D, also spoke, saying he fully supported the striking workers and that the college’s position is an attack on public workers. He pressed that this action was just the beginning and that moves were being made to end public bargaining rights in Washington as they have been in other states.

The response to the strike and rally on campus was mostly positive, with students and faculty showing up to lend support. There were exceptionally few counter protesters, with one man greeting people arriving via bus while wearing a shirt that said “Please Cross the Line.” Evergreen President Les Purce said in a written response that college has already offered Just Cause protections and salary raises. Strikers countered that the reviews in these protections would be handled by the college itself, and the raises are only 4% over two years, which does not match what other unions receive.

The strike ended Tuesday at 7 pm and no further strike actions are planned.

Thomas Petrie is a student at The Evergreen State College, studying creative writing. He is currently an in-program internship with WIP.

Next:
Olympia gun control advocates take matters into their own hands…