The Olympic Peninsula is a verdant mountainous region on the Washington coast. Lush rainforests brimming with old-growth trees sprawl forth to the sea from the slopes of the Olympic Range. It is truly a place of majestic beauty and untouched Pacific Northwest wilderness. Over a thousand square miles of this wild earth has been saved from clear-cutting and other development due to the creation of Olympic National Park, which has provided people from around the world access to this unique natural location for decades.

A military incursion into the rainforest

The US military has also taken an interest in the Olympic Peninsula and its lush forests. The US Navy plans to conduct war games over the Peninsula, using Growler jets to simulate electromagnetic warfare. Many residents and visitors feel that these exercises threaten local ecosystems and communities on the Olympic Peninsula, and that they set a dangerous precedent for military exploitation of public places.

The US Navy stated in its Information Dominance Roadmap 2013-2028 that it seeks to “employ integrated information in warfare by expanding the use of advanced electronic warfare.” The Navy’s desire to expand its advanced capabilities require training grounds that mirror battlegrounds overseas, and the dense forests of Olympic National Park provide an ideal environment for testing electromagnetic radiation weaponry. These war games are meant to train Growler pilots in the use of radar jamming technology in an environment that reflects real-world combat situations.

…the military’s coffers are burgeoning, its conflicts are unending, and its advanced forms of weaponry require vast stretches of airspace and diverse terrains for practice

The proposed training would park large trucks equipped with EMR emitters throughout the Peninsula to generate electromagnetic radiation that the Growlers could then lock onto in order to simulate the act of jamming enemy communication systems. The mobility of the trucks would make the targeting of their communication systems more difficult and therefore more effective as an exercise.

The US Navy’s use of the Olympic Peninsula comes on the heels of a variety of other attempts by the United States military to conduct war games outside the boundaries of military installations. These military exercises have a history of negatively impacting local ecosystems and alienating nonmilitary personal from public areas.

Research into the adverse effects of electromagnetic radiation is ongoing, but a plurality of this research confirms the fears of those who live throughout potential training grounds, that electromagnetic radiation can be hazardous to human and animal health. Human exposure to electromagnetic radiation can “vary from no effect at all to death, and can cause diseases such as leukemia or bone, breast, and lung cancer.”The journal Biomedicine and Pharmacotherapy released a study that concluded that “a reasonable suspicion of risk exists based on clear evidence of bioeffects at environmentally relevant levels, which, with prolonged exposures may reasonably be presumed to result in health impacts.”

The Navy claims in its 2015 Environmental Assessment that its use of EMR weaponry will have no effect on the people of the Peninsula. This claim is not supported by a swath of studies that suggest the detrimental effects of electromagnetic radiation on human health is very much real. There is still a good deal of research required to fully understand the impact of EMR war games on local people and animals.

Children and the world’s loudest jets

The noise pollution produced during this type of training has a better documented history of harming local populations. Growler jets are the loudest in the world, and a great deal of research details the negative health effects of jet noise on exposed populations. Higher rates of hypertension and heart attacks have been reported among those exposed to high levels of aircraft noise.

Stress and disruption for wildlife

Noise pollution produced by Growlers could also negatively affect local wildlife. Chronic noise disrupts the ability of animals to detect sounds essential for breeding and habitation. These noises are no mere nuisance to local fauna, they can be seen as a threat and can disrupt the regular habits of birds and mammals. Studies have shown that this intrusion of chronic high-decibel sound overstimulates animal nervous systems, leading to instances of chronic stress, diminished attention to young, increased risk of abandonment of young, habitat avoidance, diminished energy levels, and decreased life spans of subjected species.

Inroads into a precious public sphere

Perhaps the greatest ramification of these games is the precedent it sets for the military to peer over its fences for locations to practice war. The 1807 Posse Comitatus Act limits the Army’s ability to operate within the public sphere. Under its protection, common people should not be harassed by the military presence within United States borders. But the military’s coffers are burgeoning, its conflicts are unending, and its advanced forms of weaponry require vast stretches of airspace and diverse terrains for practice. And in most cases, wherever the military goes, the public cannot follow.

Skirting the law and ignoring the public

Local communities have had to deal with a great deal of secrecy from the US Navy when it comes to these war games. The Navy has provided next to no public forums for local people to ask questions about the war games, a practice that is required by law. Environmental Impact Reports have been incomplete, and the Navy has refused to follow proper protocol when it comes to releasing public notices. These tactics of the military have not been well received by many Peninsula residents.

Lina Sutton, a retired teacher in Port Townsend, said in an interview with Truthout that “most of the people who live here do so because we are free of this kind of militarism. And people who visit here, come here for the natural beauty and environment, and if we allow this place to be turned into a war-gaming area, it is reprehensible.”

In October 2016, protesters presented to the Forest Service an online petition “with more than 110,000 signatures” in opposition to the Navy’s plans to conduct war games over the Peninsula. Local opinions on militarism shift on a person-to-person basis, but there appears to be a near-unanimous negative response to the potential of noise pollution and environmental degradation brought on by EMR warfare training.

A military overreach to be ignored at our peril

The Olympic Peninsula is a unique and cherished place to Washington residents and visitors. It is home to a variety of rare ecosystems that are not found anywhere else on Earth. Its preservation is of the utmost importance to those who dwell there. It is important to pay close attention to these developments because this expansion threatens not only the Peninsula’s ecosystems, but the foundations of American civic life as well.

John Lace is a former Evergreen student, writer, and conformist living in Olympia. The original, longer version of John’s articles including citations is at https://sites.evergreen.edu/basewatch/. You can also read articles covering the history, environmental practices, and culture of the bases in our area at the Basewatch website.

Dahlgren, James. (2017, February 16). Combat Jet Noise from Landing and Taking Off At Whidbey Island-OLF Coupeville Is Permanently Injuring The Exposed Population 2017. American Board of Internal Medicine. 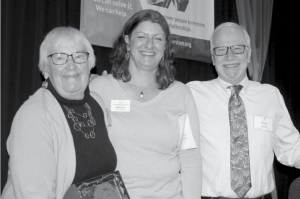