Displacement in the name of safety

After a long pause in enforcement against camping, the City of Olympia is resuming the practice of sweeping encampments on public property, particularly those which are most visible and near downtown. The city originally halted its practice of sweeps in September, after the 9th Circuit Court of Appeals determined that it is unconstitutional to criminalize people for performing life sustaining activities, like sleeping and resting, on public property when they have no other legal alternatives (Martin vs Boise).

When enforcement against camping in public was first paused, homeless advocates had questioned whether the city was pausing the sweeps in order to genuinely pursue more just and compassionate alternatives or simply to use the time to find a way for the city to return to “business as usual” without exposing themselves to the same legal risk.

Actions like the creation of the first mitigation site and the finalizing of the tiny home village on Plum Street provided some reassurance that the city was committed to pursuing the former. Further, the city council remained consistent in their public commitment to finding legal alternatives for encampment residents before carrying out sweeps, even while receiving enormous pressure from many to clear the camps downtown. However, recent events have again raised serious questions about the commitment to this more just and compassionate response to encampments.

Now, the city has announced its intention to sweep the remainder of the encampment in the Billy Frank Jr. Apartment parking lot, after months of reassuring service providers and encampment residents that the camp would not be swept until after the creation of a second mitigation site. As with the recent removals of other encampments, the justification is based on mitigating public health and safety concerns. .While there is no set timeline yet, it is likely that the sweep will take place within the next few weeks.

Governments invoking various codes, ordinances or laws pertaining to safety and public health to justify the removal of poor and marginalized residents from urban cores has been commonplace in the history of this country.

A sweep by any other name

During the mid-twentieth century about one million city residents across the U.S were displaced in slum clearances and urban renewal schemes after working class neighborhoods and communities of color were labeled as “blighted”. 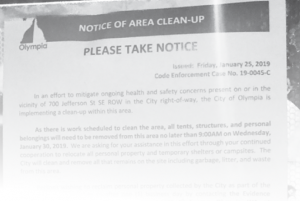 Additionally, around the time of the Great Depression, here in Olympia, a large informal community of unemployed, poor, and elderly people was erected on the edge of what would later become Capitol Lake. Known as Little Hollywood, the community was part of the wider Hooverville encampment movement that erupted amidst the Great Depression, both protesting federal economic policies and directly housing those in need. In the late 1930s, the city government began condemning the dwellings, unit by unit, subsequently evicting residents and burning the structures in the name of public health and safety.

The striking similarities between the B Avenue and 7th/Jefferson evictions and evictions of the past is testament to how little progress has been made regarding the systemic treatment of poor people by governing bodies and institutions. That the highly vague rationale for camp removals could be applied so liberally to any other encampment in Olympia is particularly concerning.

There is good cause to believe that the city carrying out sweeps in the name of public safety is an attempt to resume “business-as-usual” sweeps, while skirting the implications of the 9th Circuit Court of Appeals determination. In other words, the city appears to be resuming sweeps without being required to ensure that all encampment residents have legal and accessible alternative places to go to. While the court’s determination made it clear that it is unconstitutional for people to be criminalized for sleeping in public spaces when they have no legal alternatives, the court’s decision is not as clear if the pretext for a sweep is health and safety concerns, rather than violation of ordinance x, y, z.

This may be why recent notices of sweeps are titled as “Notice of Area Clean-up” instead of “Notice of Trespass” and why they avoid any language alluding to the threat of trespass, citation, or other forms of criminalization for those who do not leave the encampment by the given deadline.

At this point, the City of Olympia has declined to explain or clarify their reasons for changing the language used to justify sweeps, why they are resuming sweeps after such a long pause, whether or not people can expect sweeps to continue without alternative places for people to go, or how they see their interpretation of Martin vs Boise justifying these actions and decisions.

Meanwhile, Just Housing is continuing to advocate for the City of Olympia to:

Release a public statement clarifying how the City is interpreting Martin vs Boise and how the City will or will not be changing its policies and procedures related to encampments and encampment sweeps accordingly.

Work with stakeholders- including Just Housing, encampment residents, service providers, business owners, and other invested community members-to amend policies and procedures related to encampments and sweeps so that they are more just, compassionate, humane, and effective.

Pause the enforcement against unsanctioned camping on city property, until these interpretations, policies and procedures have been amended and publicly/transparently clarified

Pause the sweep of Smart Lot and give Just Housing time to bring together a work group of stakeholders to seek humanitarian solutions to current challenges that work for all.

Support a major community cleanup of the camp and redirect resources that would be used to pay for the eviction towards covering the cost of additional bathrooms, garbage, recycling, and handwashing stations

Tye Gundel is a local activist and co-founder of Just Housing. She has been working with the organization since its founding o help coordinate the group’s political advocacy, direct action, and encampment support efforts. She is a graduate from The Evergreen State College, with a focus in political economy. Prior to her time with Just Housing, Tye worked and volunteered with numerous Olympia homeless services programs.

Bobby Karelton is an organizer involved in a range of Olympia-based social movements.