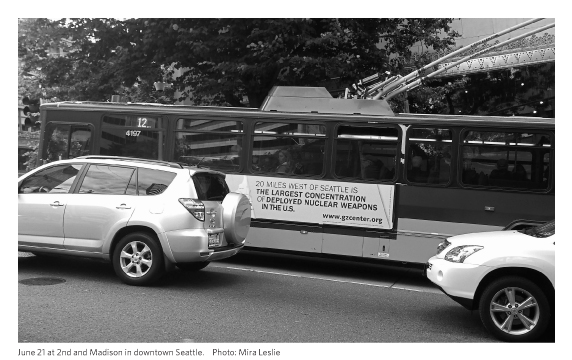 On June 23, and continuing for eight weeks, 14 Seattle Metro downtown buses are displaying the following paid advertisement declaring “Twenty miles west of Seattle is the largest concentration of deployed nuclear weapons in the United States.” Included in the advertisement is a map showing the proximity of Seattle to Naval Base Kitsap-Bangor, home port for eight of the Navy’s 14 Trident nuclear powered submarines.

King County Metro was initially hesitant to run the ad, and questioned the accuracy of the statement of fact regarding the number of nuclear weapons at Bangor. Hans Kristensen, director of the Nuclear Information Project at the Federation of American Scientists, provided corroboration of the statement. Kristensen provides the public and government agencies with analysis and background information about the status of nuclear forces worldwide and the geopolitical implications of nuclear weapons.

The bus ads are an effort by Ground Zero Center for Nonviolent Action, a grass roots organization in Poulsbo, Washington, to reawaken public awareness of the dangers of nuclear weapons.

Ground Zero member, Rodney Brunelle, said of the bus ad campaign, “We hope to generate a measure of citizen interest, and to begin a public discussion of nuclear weapons in the Puget Sound region. In this election year the danger of nuclear weapons ought to be a topic of discussion.”

The bus ads measure 30 inches tall and 144 inches in length and are posted on the sides of 14 Metro buses in downtown Seattle. The blue lines show routes that are scheduled for buses with the ads and the black lines show routes of buses that may carry the ads.

On March 11, 2016, the 10th bi-annual Nuclear Deterrent Symposium was held in Silverdale to discuss the future of U.S. strategic forces. Rear Adm. Charles Richard criticized opposition to the Navy’s $100 billion plan for 12 new replacement SSBN submarines [ballistic missile carrying, nuclear-powered submarines] proclaiming, “It’s a matter of priorities.” The new SSBNs would replace the submarines at Bangor. Rear Adm. Richards noted that the USS Ohio arrived at Bangor in 1982 to much protest and stated, “We have taken that [nuclear weapons] out of the national psyche.”

In the 1970s and 1980s, thousands demonstrated against nuclear weapons at the Bangor base and hundreds were arrested. Seattle Archbishop Hunthausen had proclaimed the Bangor submarine base the “Auschwitz of Puget Sound” and in 1982 began to withhold half of his federal taxes in protest of “our nation’s continuing involvement in the race for nuclear arms supremacy.’’

One Trident SSBN submarine at Bangor is estimated to carry about 108 nuclear warheads. The W76 and W88 warheads at Bangor are equal respectively to 100 kilotons and 455 kilotons of TNT in destructive force. One submarine deployed at Bangor is equal to more than 1,400 Hiroshima sized nuclear bombs.

On May 27, 2016, President Obama spoke in Hiroshima and called for an end to nuclear weapons. He said that the nuclear powers “…must have the courage to escape the logic of fear, and pursue a world without them.”  Obama added, “We must change our mindset about war itself.”

Founded in 1977 and located on 3.8 acres adjoining the Trident submarine base at Bangor, Washington, The Ground Zero Center for Nonviolent Action offers the opportunity to explore the roots of violence and injustice in our world and to experience the transforming power of love through nonviolent direct action. We resist all nuclear weapons, especially the Trident ballistic missile system.

Next:
Policy changes that matter The most recent incident I’ve seen…