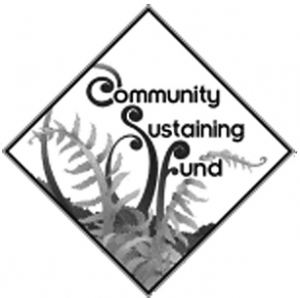 Do you ever “round up” for the Community Sustaining Fund (CSF) when making a purchase at the Olympia Food Co-op (OFC)?  The spare change left when you round up to the next whole dollar, instead of jingling in your pocket, adds up to become sustaining fund grants, and an opportunity for social, environmental and economic justice projects.  Funding for CSF grants comes from those who round up at OFC,  and from other businesses and fundraising efforts.

Around 1985, a group of community activists identified the need to create grants for social change projects that had no funding opportunity or source of revenue.   Often the ideas for action were outside the mainstream.  The grants were intended to act as seed money for grassroots projects to take hold, with the expectation and hope that the projects become self-sustaining.

Groups that have received CSF funding are a veritable who’s who of radical progressive individuals and groups in Thurston County.

The CSF founders established principles and organized a system to raise grant allotment money and identify individuals or groups with innovative ideas that met the principles.  The formation of community around actions would help sustain efforts into the future.

After much hard work and commitment, the founders created the CSF in 1987 to provide start-up funds for projects that would otherwise go unfunded.  In the spring and fall each year the CSF accepts applications for grants up to $1000 for projects meeting certain criteria intended to fulfill its mission:

The grant criteria fall into the categories social justice, community building and environment.  CSF grants go to groups working to address the major categories through education, environmental defense, civil liberties, labor issues and many other innovative methods and ideas.

A key principle established in the beginning was a consensus decision-making process.  The CSF leadership group reviews grant applications to evaluate project ideas and funding requests.  Applicants are invited to in-person interviews, currently held at the Community Room at MIXX96 in the heart of downtown Olympia.  For the interviews, CSF provides applicants with specific questions about how their projects will translate into social/environmental/economic justice actions.  Directly following the interviews, the CSF leadership group debates the fund award for each project until consensus is reached.

CSF has provided micro grants to projects in the community twice a year for over 30 years.  Groups that have received CSF funding are a veritable who’s who of radical progressive individuals and groups in Thurston County.    Many of those projects have taken root and continue to provide a resource to the community.

For over 30 years, the board of CSF has reviewed grant applications for a wide variety of projects like Fertile Ground, Heartsparkle Players, Bridge Music Project, and Sidewalk, to name a few.   The CSF has provided about $125,000 to more than 200 projects in Thurston County.

CSF has supported environmental projects like the Estuarium, Westside Central Park, the Blue Heron Rookery; social justice efforts through Veterans for Peace, and Sanctuary Know your Rights; and community-building through the Common Cause Property Alliance.

Like many of the funded projects, CSF is an independent, entirely community-created-and-maintained entity.   Even a small amount of dollars can make a big difference where no other funding is available.  These dollars allow many projects to move forward. For instance a number of community gardens around the area use funds to continue operation and remain open for community use.  Over 99 percent of funds raised go directly into the community grants.

Many of the individuals and organizations who have received grant funds have formed a long-term relationship in support of CSF.  The Olympia Food Co-op is a key partner with CSF. The Co-op Board has designated a permanent CSF Liaison position to maintain good communication between the Co-op and CSF.  Members of the CSF leadership group have presented to the OFC at general meetings, and staff and committee meetings, extolling the virtue and value of providing micro grants to a multitude of worthy groups and causes.

Elements of the OFC mission closely align with the CSF principles.   Partly as a result of CSF activism, the check out system at the co-op stores now has an opt-in option to round up.  OFC members can also “opt-in” by signing up with member services.  When checking out at the register with their purchase, opt-in members will receive a reminder from the cashier, asking if you want to round up.  You can choose CSF or another cause at the time of purchase. Or say “not today.” There is no obligation, only a reminder.  If you are able to “round up” at the Olympia Food Coop, please do.  Every penny counts.  ..

Leadership group members volunteer time to publicize grant cycles, organize fund-raising, review applications and make consensus-based decisions.  CSF is always seeking new board members who can bring time, energy and enthusiasm to the process.  Join us in our good work in support of the community!  You can contact CSF at thurstoncsf@comcast.net.

Many of the projects CSF funds would not be eligible for funding from any other source.  The original goal of providing a fund source where no other is available continues to fill a need in our community.

Next:
INDIVIDUATE
Don't Congregate Don't Elaborate Individuate Just to Placate the State…
← INDIVIDUATE ← “We can do more together than alone”