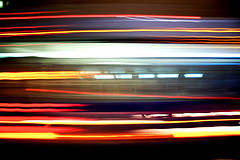 Class, climate, and the need for free transit

December is wet and bone-chilling in Seattle. So, imagine climbing from bed two hours early to catch three busses to work. Welcome to the reality of commuting in the wake of public transit cuts. In the dark of an early morning commute, a bus rider told me this horror story as I drove my electric trolley up Beacon Hill, where she works. “It could get worse,” she lamented. Her commuter train is a candidate for elimination because it’s “not profitable.”

Next:
Since only rich kids can afford to go to college…