Ballots arrive in mailboxes next month: Changes in voting procedure for presidential primary

Our Revolution Thurston on January 1, 2020

If you’re planning to vote in Washington state’s Democratic Presidential Primary, be prepared for some big changes this year. The caucus has been replaced by a vote-by-mail primary. Ballots will arrive in mailboxes February 21, 2020, making Washington one of the earliest states to vote. That means your vote will play a big part in building momentum for the candidate who will face Trump in the general election.

To ensure your ballot arrives on time and is counted, Our Revolution Thurston (ORT) recommends you mail it back right away. The remote registration deadline is March 2. You can register in person in the Auditors office up until 8pm on Election Day, March 10. Although Washington doesn’t require you to register your party preference to vote in the general election, for the Democratic primary you’ll be asked to declare as a Democrat. The final deadline to get your ballot in is March 10.

ORT has endorsed Bernie Sanders and is working hard to get the word out. In addition to weekly events at the Olympia Farmers Market and Burial Grounds, they are building momentum with events both independent of and in coordination with the campaign, including “debate watch” parties and phone banking events. ORT is also active in the local Democratic Party.

Sanders’ role in the Congressional Progressive Caucus is another reason for ORT’s endorsement. Sanders co-founded this. the second-largest caucus within the Democratic Party, in 1991 and remains the only presidential candidate who is a member. Sanders, aka “The Amendment King.” is known for his ability to work across the aisle to get legislation passed that addresses the needs of working and oppressed people. 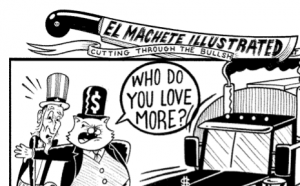