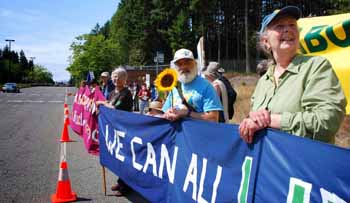 Silverdale, WA, August 11, 2013:  Peace activists with Ground Zero Center for Nonviolent Action held an afternoon vigil and nonviolent direct action at the Naval Base Kitsap-Bangor Main Gate in remembrance of the atomic bombings of Hiroshima and Nagasaki.

The Trident submarine base at Naval Base Kitsap-Bangor, just 20 miles from Seattle, represents the largest concentration of operational nuclear weapons in the US arsenal.

Each of the eight OHIO class submarines at Bangor carry as many as 24 Trident II(D-5) missiles, each capable of carrying up to eight independently targetable warheads.  Each nuclear warhead has an explosive yield up to 32 times the yield of the bomb that destroyed Hiroshima.

People lined the roadside with signs and banners calling for the abolition of nuclear weapons.

After 30 minutes,  three participants walked on to the roadway  holding a banner reading “Give Peace a Chance. No, Seriously.”  Washington State Patrol officers escorted the resisters to the median where they were issued citations for being in the roadway where prohibited.

A second group then blocked the roadway with a banner that said “Create a Peaceful World. Abolish Nuclear Weapons.”  They were also escorted to the median and cited.

A short while later a final group stretched a banner across the entrance lanes.  It read “We can all live without Trident.”  State Patrol officers escorted these last four nuclear resisters to the median for processing and release.

The nonviolent direct action and leafleting were the culmination of a weekend of events at Ground Zero Center for Nonviolent Action. A highlight of the weekend was the keynote presentation by Bernie Meyer, known in India as “The American Gandhi.”  Meyer presented a portrayal of Gandhi and his journey of nonviolence.

According to Meyer, when asked by Margaret Bourke-White how he would address the atomic bomb, Gandhi replied, “Nonviolence is the only thing the atom bomb cannot destroy.  When I heard that Hiroshima was bombed, I did not move a muscle.  I thought unless humanity adopts nonviolence, it will be suicide for humanity.”

Participants in the weekend included members of the 2013 Interfaith Peace Walk for a Nuclear Free Future and people from a number of Seattle Catholic parishes.

Ground Zero holds three scheduled vigils and actions each year in resistance to Trident and in protest of U.S. nuclear weapons policy.

The group has been working to stop the Navy’s construction of a $715 million Second Explosives Handling Wharf at Bangor.

For thirty-six years Ground Zero has engaged in education, training in nonviolence, community building, resistance against Trident and action toward a world without nuclear weapons.

For more information on this action can be found at www.gzcenter.org.

Next:
A history of resistance to the Trident nuclear weapons system…