“Are you going to just stand by?”

The WIP Publishing Committee on August 1, 2019 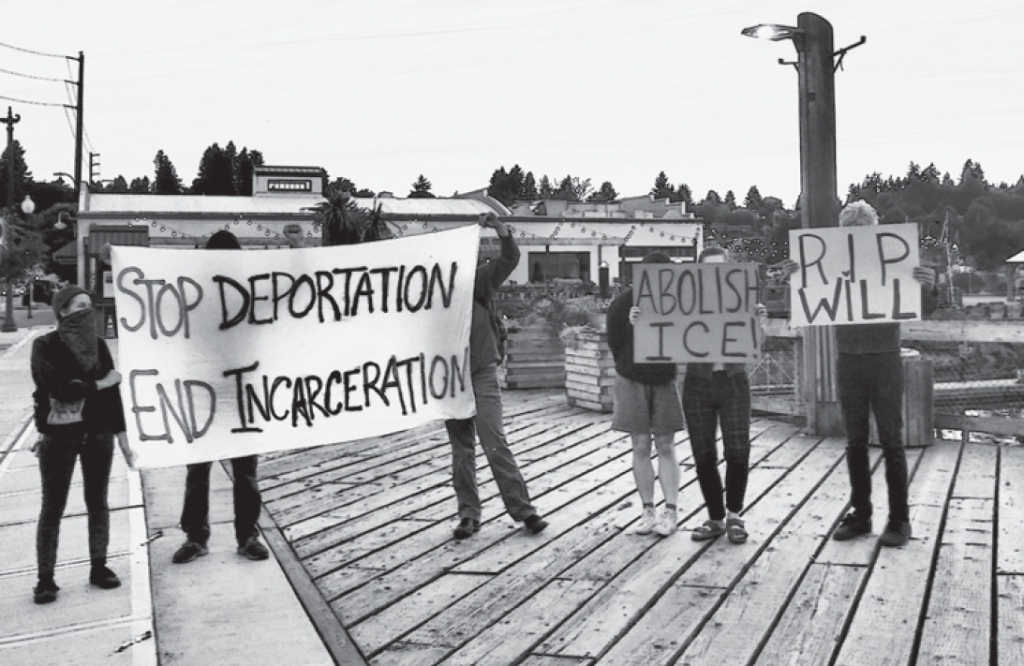 Willem Van Spronsen, 69, was shot and killed around 4 am on July 13 by police officers outside the Northwest Detention Center, a private immigration detainment facility in Tacoma, WA.

We are printing his statement, made public after his death, because reading it forces us to think about the way our government is persecuting those it deems inferior—and to ask what is our responsibility for that? It makes us conscious. The behavior of “good Germans” that facilitated a descent into barbarity. How do we avoid being “good Americans?” Even though we disagree with his way of responding, we accept that we must answer the question.

Van Spronsen grew up in the shadows of the Nazi occupation of Europe. He had, as he put it in his statement, an “unshakeable abhorrence for injustice.” In keeping with his beliefs, he wrote, “I promised myself that I would not be one of those who stands by as neighbors are torn from their homes and imprisoned for somehow being perceived as lesser.”

Accounts of what Van Spronsen was doing outside the detention center vary. According to the Tacoma-based grassroots collective, La Resistencia:

Based on available information, including the police scanner recording, Willem Van Spronsen, the protester killed, appears to have been targeting not the detention center itself, as has been widely reported in the media, but the parking lot across the street from the detention center which houses the NWDC’s transportation infrastructure.

Police reports and officials from the Northwest Detention Center claim Van Spronsen was trying to blow up a propane tank, an action that had potential to cause significant harm to employees and detainees.

Friends and family stated that they believed Van Spronsen knew he would be killed for his actions. Van Spronsen alludes to this likelihood as well, through his reference to the Italian folksong Bella Ciao which was adopted as the anthem of the Italian Resistance in their struggle against Nazi German forces.

This is Willem Van Spronsen’s statement

i have a father’s broken heart
i have a broken down body
and i have an unshakable abhorrence of injustice.
that is what brings me here.
this is my clear opportunity to try to make a difference, i’d be an ingrate to be waiting for a more obvious invitation.

i follow three teachers:
don pritts, my spiritual guide, “love without action is just a word.”
john brown, my moral guide, “what is needed is action!”
emma goldman, my political guide “if i can’t dance, i don’t want to be in your revolution.

i’m a head in the clouds dreamer, i believe in love and redemption.

i believe we’re going to win
i’m joyfully revolutionary. (we all should have been reading emma goldman in school instead of the jingo drivel we were fed. But i digress.) (we should all be looking at the photos of the YJP heroes should we falter and think our dreams are impossible, but i double digress. fight me.)

in these days of fascist hooligans preying on vulnerable people on our streets, in the name of the state or supported and defended by the state

in these days of highly profitable detention/concentration camps and a battle over the semantics,

in these days of hopelessness, empty pursuit and endless yearning

we are living in visible fascism ascendant. (i say visible, because those paying attention watched it survive and thrive under the protection of the state for decades [see howard zinn, “a people’s history of the united states.) now it unabashedly follows its agenda with open and full cooperation from the government. from governments around the world.

fascism serves the needs of the state serves the needs of business and at your expense. who benefits? jeff bezos, warren buffet, elon musk, tim cook, bill gates, betsy de vos, george soros, and need i go on? let me say it again: rich guys, (who think you’re not really all that good,) really dig government, (every government everywhere, including “communist” governments,) because they make rules that make rich guys richer.
simple. don’t overthink it.

(are you patriots in the back paying attention?)

when i was a boy, in postwar holland, later france, my head was filled with stories of the rise of fascism in the 30’s. i promised myself that i would not be one of those who stands by as neighbors are torn from their homes and imprisoned for somehow being perceived as lesser.
you don’t have to burn the motherfucker down, but are you just going to stand by?

this is the test of our fundamental belief in real freedom and our responsibility to each other.
this is a call to patriots, too, to stand against this travesty against everything that you hold sacred. i know you. i know that in your hearts, you see the dishonor in these camps. it’s time for you, too, to stand up to the money pulling the strings of every goddamn puppet pretending to represent us.

i’m a man who loves you all and this spinning ball so much that i’m going to fulfill my childhood promise to myself to be noble.

here it is, in these corporate for profit concentration camps.
here it is, in brown and nonconforming folks afraid to show their faces for fear of the police/migra/proud boys/the boss/beckies…
here it is, a planet almost used up by the market’s greed.

i’m a black and white thinker.
detention camps are an abomination.
i’m not standing by.
i really shouldn’t have to say any more than this.

i set aside my broken heart and i heal the only way i know how- by being useful.
i efficiently compartmentalize my pain…
and i joyfully go about this work.
(to those burdened with the wreckage from my actions, i hope that you will make the best use of that burden.)

i regret that i will miss the rest of the revolution.
thank you for the honor of having me in your midst.

giving me space to be useful, to feel that i was fulfilling my ideals, has been the spiritual pinnacle of my life.

doing what i can to help defend my precious and wondrous people is an experience too rich to describe.

my trans comrades have transformed me, solidifying my conviction that we will be guided to a dreamed of future by those most marginalized among us today. i have dreamed it so clearly that i have no regret for not seeing how it turns out. thank you for bringing me so far along.

i am antifa, i stand with comrades around the world who act from the love of life in every permutation. comrades who understand that freedom means real freedom for all and
a life worth living.

keep the faith! all power to the people!
bella ciao

don’t let your silly government agencies spend money “investigating” this one. i was radicalized in civics class at 13 when we were taught about the electoral college. it was at that point that i decided that the status quo might be a house of cards. further reading confirmed in the positive. i highly recommend reading!