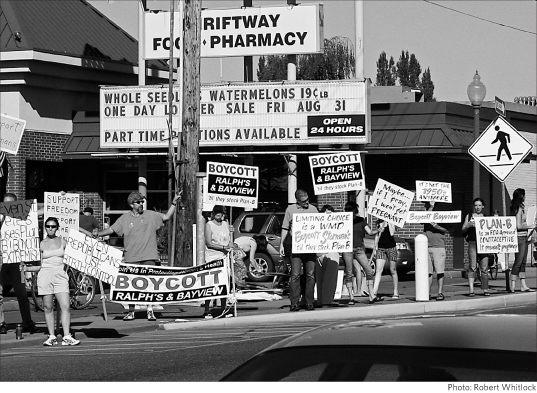 Where will the case go from here? Back to the 9th or to the Supreme Court?

Washington State’s regulations protecting patients from the judgmental whims of pharmacists and pharmacy owners, the first such regulations in the nation, have been upheld. On July 23, the 9th Circuit Court of Appeals reversed the opinion of the lower court, which had found in favor of Ralph’s. This reversal is a great victory for women, the state of Washington, and all pharmacy customers, and may well pave the way for similar patient protection regulations in other states. But the fight isn’t over. The likelihood of an appeal is looming, and it is uncertain whether the Pharmacy Board will take steps to enforce the regulations.

The lawsuit began in 2007 as Stormans v. Selecky, then changed to Stormans v. Wiesman when a new Secretary of Health, John Wiesman, was appointed. The owners of Ralph’s joined two pharmacists in a lawsuit challenging new Washington State regulations which required pharmacies to deliver lawful medications without regard to “moral, philosophical or personal objections.” Significantly, the regulations allowed individual pharmacists to step aside and allow other pharmacy personnel to dispense drugs they found objectionable. This accommodation was written into the rules with the hope it would deflect legal challenges claiming an individual pharmacist’s “right to conscience.” However, the new regulations required good faith stocking of medications needed by the population served by the pharmacy. Kevin Stormans, the owner of Ralph’s pharmacy, is not a pharmacist himself, but the lawsuit claimed that requiring the pharmacy to stock emergency contraception infringed on Stormans, Inc.’s First Amendment right to the free exercise of its religion.

The extreme right wing legal advocacy groups who have been representing Ralph’s owners are not willing to accept defeat. The day the appellate court’s decision was published, the Stormans’ lead counsel, Kristen Waggoner of the Alliance Defending Freedom, announced “We will appeal this ruling.”

The plaintiffs have two options for an appeal: They can request an en banc hearing at the 9th Circuit, or appeal for review by the Supreme Court. The state’s appeal was originally heard by a panel of three judges at the appellate court; an en banc review at the 9th circuit would be heard by a panel of 11 judges. En banc reviews are reserved for cases which involve a question of exceptional importance, or situations where the panel’s decision conflicts with Supreme Court decisions or prior decisions of the appellate court. Requests for en banc review must be filed within two weeks after the entry of judgment by the three court panel, so the Stormans’ deadline for this request is August 6. Although Washington Attorney General Robert Ferguson has asserted he believes the plaintiffs will request an en banc review, it seems unlikely that a full panel at the 9th circuit, which has a reputation as being the most liberal of the appellate courts, would reverse the three judge panel’s unanimous decision.

The Supreme Court of the United States has recently proven to be friendlier to claims of religious freedom for Christian business owners. The decision in the Hobby Lobby case is one example of this trend. However, SCOTUS denies the vast majority of requests for review it receives. According to the Supreme Court’s rules, review on a writ of certiorari is not a matter of right, but of judicial discretion. (A writ of certiorari is a request for a case review.) According to the SCOTUS website, the Supreme Court receives approximately 10,000 petitions for a writ of certiorari each year. The Court grants and hears oral argument in about 75-80 cases. However, SCOTUS is more likely to review cases involving matters of constitutional law, and the Stormans case is based on a First Amendment claim. Although it would be exciting to see a case that began as a boycott of a local Olympia store make it to the Supreme Court, having the case fail to advance to the Supreme Court would be better for pharmacy patients in Washington (and elsewhere, if other states adopt rules similar to Washington’s). If an en banc review at the 9th circuit finds as the three judge panel did, and the Supreme Court refuses to review the case, the appellate court’s decision would prevail, and the regulations would remain in force.

The regulations will be meaningless, however, if they are not enforced by the state. Historically, the Board of Pharmacy has not been inclined to take punitive action against pharmacies that are out of compliance with its regulations for stocking medications. One reason for this is that their enforcement process is complaint-driven, meaning that unless the Department of Health receives complaints from consumers regarding a pharmacy’s unwillingness to stock and dispense the medications they need, no enforcement action is triggered. Another consideration is that the Board of Pharmacy has few punitive options for pharmacies that are out of compliance. It cannot fine a pharmacy for failing to stock medications needed by the patients it served; it can only pull the pharmacy’s license, a relatively drastic step the Board may be reluctant to take. Previous complaints against Ralph’s for violating state pharmacy stocking regulations have been dismissed although there was strong evidence that infractions of the policy had been repeatedly committed.

At the time Ralph’s filed their lawsuit in 2007, 21 complaints against them had been dismissed and three were still pending. Investigations into the three open complaints were suspended during the course of the trial. Reached four days after the Stormans’ decision was published, Board of Pharmacy Executive Director Chris Humberson acknowledged that he would be meeting with a state Assistant Attorney General to discuss how to proceed with complaints against Ralph’s, as well as other issues arising from the 9th circuit’s decision in the state’s favor. (At press time, no information regarding the resolution of pending and future complaints against pharmacies that violate the regulations was available from the Department of Health.)

It is entirely possible that in the absence of new complaints, despite the eight year long legal battle and the considerable expense by the state to defend its regulations, Ralph’s will continue to operate as a rogue pharmacy, refusing to deliver contraception to women, without suffering any consequences. The only path to ensuring patient’s needs are consistently met, at Ralph’s and in pharmacies throughout the nation that are watching to see what happens in this precedent case, lies in Olympia women or men walking into Ralph’s, requesting Plan B or ella, then filing a complaint with the Department of Health if they are refused. Any customer who is denied service at a pharmacy for “moral, philosophical or personal” reasons is free to file a complaint; complaint forms are available on the Department of Health website.

Janet Blanding has been writing about the Ralph’s boycott and subsequent lawsuit since 2006, when her Plan B prescription could not be filled there. After a year-long investigation, the Board of Pharmacy dismissed her complaint without action against Ralph’s.