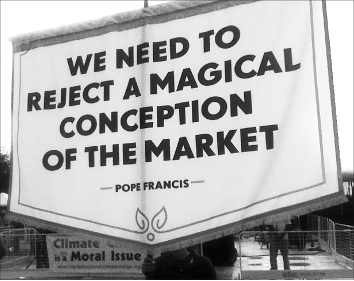 Any pope in a storm

Does Francis offer a safe harbor?

The last time I read an encyclical I was a teenager attending St. Edward’s Seminary in Kenmore, Washington. The encyclical was called Rerum Novarum, written by Pope Leo the XIII in 1891.

The priests told us about Leo since we were going to be priests in parishes made up of the Catholic working class. Leo said workers should get to have unions, but need to give up any ideas of class conflict or socialism. He wanted to reduce poverty and maintain class harmony. I was never sure about that.

I left the seminary after four years, returned to my Irish-Catholic family, completed my degree at Seattle University, thanks to wages I obtained due to one of those unions, and left for two years to live in a Turkish village.

When I came back to the US in 1967, Archbishops from New York to Seattle were blessing Catholic soldiers being sent overseas to kill Vietnamese. I never went to Mass again, declined their Induction Order and didn’t read any more encyclicals, that is, until now.

I’m not too sure why I read it. This summer Eastern Washington, a place I love, burned. A spiritual place I grew up with, Mt. Rainier, exposed its ribs. I was starting to get pissed off. Maybe like most people, I’m looking for any signs of leadership faced with Capital’s drive to extinguish the Earth.

Jorge Mario Bergoglio, the future Pope Francis, focused his doctoral studies on the work of a philosopher and theologian, Romano Guardini. Pope Francis cites Guardini’s book, The End of the Modern World, in his encyclical. I picked his book up and read it. Here’s something that Guardini wrote in his closing chapter:

“Before all else, then, man’s depth must be reawakened. His life must again include times, his day moments of silence in which he collects himself, spreads out before his heart the problems which have stirred him during the day. In a word, man must learn again to meditate and to pray. How, we cannot say.”

He continues, “But in any case, he must step aside from the general hustle and bustle; must become tranquil and really “there,” opening his mind and heart wide to some word of piety or wisdom or ethical honor…”

On care for our common home

I thought I’d give this a try with Laudato Si, On Care for our Common Home.

Francis lists all the problems we’re experiencing in his opening chapter: pollution, waste, warming, water depletion, loss of biodiversity, privatization, migration, global inequality, speed up and poverty caused by an irrational confidence in “progress and human abilities,” a “throwaway culture,” current models of production and consumption, the lack of a leadership and culture capable of responding, global summits that produce “superficial rhetoric, sporadic acts of philanthropy and perfunctory expressions of concern” and an omnipresent digital world that “can stop people from learning how to live wisely, to think deeply and to love generously.”

Francis concludes there are signs of a breaking point and that “our common home is falling into serious disrepair.”

One of the things Francis wants to repair is the idea of Dominion. The idea that God’s grant of dominion to man “has encouraged the unbridled exploitation of nature” is not a correct interpretation, he says. The biblical reference to “tilling” implies a relationship of mutual responsibility between humans and nature. He concludes that the Bible has no place for “tyrannical anthropocentrism.”

He also wants to assure us that while the Judaeo-Christian tradition demythologized nature and denied its divinity, this tradition still emphasizes human responsibility for nature. Given this he says, “we can leave behind the modern myth of unlimited material progress” and realize there are serious consequences for society “when nature is viewed solely as a source of profit and gain.”

I’m glad he made this argument. He’s the theological Naomi Klein and that’s fine. However, his analysis of the cause of the “ecological crisis” is what got my attention; and, in this, he owes a debt to his intellectual mentor Romano Guardini.

Pope Francis focuses on our “technical prowess” that has given a very few people more power over humanity than ever before. This “one dimensional paradigm” lays its hands on things “attempting to extract everything possible from them while frequently ignoring or forgetting the reality in front of us.”

He then relies on Romano to show the intent of this paradigm. “.’.. it moves forward in the final analysis neither for profit nor for the well-being of the human race’” but “‘ in the most radical sense of the term, power is its motive…’”.

In his book, Romano focuses on the new dangers that “arises from the factor of power;” the power that the modern world mobilized to conquer nature which now with its logic and force is ending that modern world. Those dangers include the danger of violent destruction by “people who set their hopes on war” and on greater power bringing “the temptation to take the short cut of force.” Yet, neither the Pope nor Romano see power itself as the problem. The question is, says Romano, “is man still a match for his our works?”

The Pope’s encyclical shifts into his elements of “Integral Ecology,” followed by his suggestions for “Lines of Approach and Action.” Integral Ecology argues we face one complex crisis “which is both social and environmental.” This requires a culture that is “a living, dynamic and participatory present reality,” that can focus on the daily relationship between living spaces and human behavior and invoke the “principle of common good” so that it acts as a call “to solidarity and a preferential option for the poorest of our brothers and sisters.”

The Pope’s integral ecology also emphasizes intergenerational solidarity. “Doomsday predictions can no longer be met with irony or disdain. We may well be leaving to the coming generation debris, desolation and filth.” He continues, “The effects of the present imbalance can only be reduced by decisive action, here and now.”

The decisive action the Pope calls for is a series of “dialogues.” Dialogues with the international community to pay for the costs of transition from fossil fuels. Dialogues on politics so that citizens control political power, otherwise it will not be possible to control damage to the environment. Dialogues on transparency so that decision making is “free of all economic and political pressure” and the precautionary principle can be used to protect the most vulnerable with a limited ability to assemble incontrovertible evidence.

The Pope also calls for a re-definition of our notion of progress. The financial crisis of 2007-2008 provided such an opportunity, but it didn’t happen. “It is not enough to balance, in the medium term, the protection of nature with financial gain, or the preservation of the environment with progress. Halfway measures simply delay the inevitable disaster.”

Finally, the Pope says the majority of the planet profess to be believers. “This should spur religions to dialogue among themselves for the sake of protecting nature, defending the poor and building networks of respect and fraternity.” He concludes by saying we need to keep in mind that ‘realities are greater than ideas.’

One of those realities, however, is the question of power and whether humans, in a new relationship with nature, can curb it or shape it toward a new notion of progress that recognizes limitations as well as the poor. Power, says Romano, is “the ability to move reality” and the challenge is for man “to employ power without forfeiting his humanity.”

Romano doesn’t think contemporary man can do it, but sees a new “human structure” where man will not have power over nature, but over his own power and the Pope seems to agree. The Pope says we human beings are above all the ones that have to change. We must gain an “awareness of our common origin, of our mutual belonging, and a future to be shared with everyone.” It’s the basic questions of an organizer… who are we, where are we and what’s our vision.

The power of 1.2 billion Catholics

I don’t know if those questions are a “safe harbor”, but let’s say Pope Francis can get the 1.2 billion Catholics, half of the Christian world, to exercise their power and “move reality” to confront “the very few” who are responsible for the social and environment crisis he has outlined. That would be something to see.

But, as one of my old friends, another Irish-Catholic said, “ I understand that he is a spiritual leader, but for me to have even a sense of engagement the Papa and all the rest of the hierarchy need to get rid of the robes, slippers, pope mobiles and all other accoutrements of wealth and privilege and ‘take to the streets.’ Less preaching, more doing.”

Dan Leahy is a resident of Olympia’s Westside.

Next:
Recognition in America As do all good conservative and reactionary…