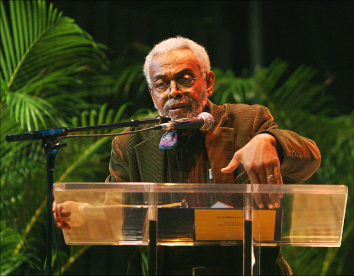 The spirit will not descend without song.

Amiri Baraka (born Everett LeRoi Jones) was one of the greatest poets in American history. A two-time recipient of the American Book Award, he was a founder of the Black Arts Movement, a multimedia explosion of poetry, prose, paintings and other forms of expression rooted in the Civil Rights Movement, Black Power, and the global anti-colonial struggle. Baraka’s contemporaries in the Black Arts Movement included literary giants such as Sonia Sanchez, Lorraine Hansberry, Ishmael Reed and many others who used words as weapons to attack the rigid systems of oppression that continue to degrade social relations in the United States.

Amiri Baraka’s words were variously incisive, wide of the mark, angry, joyous, fiery, loving, wicked, satirical, incendiary, full of hate, full of love, strident, whispery, soft as down, hard as iron. Like all great artists Baraka ultimately refused to integrate into what he understood to be a fundamentally corrupt society. A year after winning the prestigious PEN Open Book Award for his magnificent Tales of the Out and Gone (2008) Baraka stated that “Art is a weapon in the struggle of ideas, the class struggle. The bourgeoisie uses the arts to valorize capitalism, whether books, films, drama, music. The most progressive artists can never get the exposure that the artist prostitutes get. Mao said even arts, literary criticism et cetera is part of the class struggle. So that we must utilize works that are artistically powerful and ideologically revolutionary.”

LeRoi Jones did not start out as a radical. To paraphrase C.L.R. James, the poet as a young man was made by the revolution.  After a stint in the U.S. Air Force, he established a reputation as a promising poet and playwright in the 1950s with plays such as A Good Girl is Hard to Find and his first collection of poems, Preface to a Twenty Volume Suicide Note published in 1961.  Early in his artistic life, Baraka was associated with the poetic avant-gardes Allen Ginsberg, Jack Kerouac, Gilbert Sorrentino and the Greenwich Village Beats.

The rise of the Civil Rights Movement had a major impact on Baraka’s development but his trip to revolutionary Cuba in 1960 was a turning point in his creative life. He traveled to the nation as part of a delegation of Fair Play for Cuba Committee members. The Third World artistic struggle for freedom humbled Baraka. While he initially defended the separation of art and politics, his counterparts from the Global South would have none of it. In Cuba Libre (1966) Baraka vividly remembered that Mexican poet Jaime Shelley openly challenged him: “You want to cultivate your soul? In the ugliness you live in, you want to cultivate your soul? Well, we’ve got millions of starving people to feed, and that moves me enough to make poems out of.”

Subsequently, Baraka (as LeRoi Jones) wrote one of the most influential books ever published on African American history: Blues People: Negro Music in White America (1963). The text was squarely Pan-African and the maturing writer placed the origins of blues and jazz music squarely in the maelstrom of Africa, the transatlantic slave trade, and the struggles of enslaved people to survive American capitalism. The book contains gems and revelations on almost every page. Blues People referred to Mexican civilization at the time of the Conquest as “…one of the longest-lived, most sophisticated and exalted traditions of human life on this planet.”

Beloved in his native Newark, Baraka became heavily involved in politics of various forms, and he had a major role in helping to elect Kenneth A. Gibson, the city’s first African American mayor in 1970. (His son, Ras Baraka, is currently a candidate in the Newark mayor’s race.) In the mid-1960s, profoundly shaken by the wave of assassinations that took the lives of Malcolm X, Martin Luther King, Jr., Bobby Kennedy, and others, he produced several writings he later condemned as being frankly anti-Semitic.  This self-criticism set Baraka apart from countless white authors who have never felt the need to retract or to apologize for anti-black or anti-Latino utterances then or now.

Words cannot express my own sadness in thinking about a world without Amiri Baraka. For those of us in the farm worker and Chicano movements his barbs against the powerful have been a source of strength for decades. Baraka’s great comrade and intellectual sparring partner Ishmael Reed provided the most fitting epitaph of all: “I once said that he did for the English syntax what Monk did with the chord. He was an original.”

Paul Ortiz is the director of the Samuel Proctor Oral History Program at the University of Florida and formally resided in Olympia, Washington.

Next:
To many, Gabriel Garcia Marquez is the most important writer…