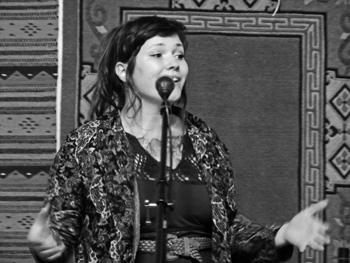 Amazingly delightful while bringing in the bucks!

On August 24 Works In Progress hosted it’s first annual poetry slam fundraiser at Traditions Café. Our reaction? Who knew that a poetry contest could be so much fun?  Who knew that an audience could cheer or boo decisions made by the judges over poems?  It was akin to a football game but a lot more fun, a lot warmer, and a hell-of-a-lot friendlier.

Imagine, refs pulled from the crowd at random and no one seemed to mind.  People wandered in and out as the evening passed yet everyone strained to hear every word of every poem spoken. The participants were every bit as prepared as any sports team, serious in their efforts, although some brief moments of nervousness broke through.  No one just walked in with off the cuff impromptu words.  These were serious folks and it showed.

Kurt Armbruster and Terri Moeller of The Hinges and Miles Nowlin warmed up the crowd with cerebral tunes reflective of the evening’s atmosphere. Following the music and preceding the contest, two well-known Olympians addressed the need for citizen journalism.  Dana Walker—author of the Thunderbolt newsletter, KOWA personality, and occasional WIP writer, and  Zahid Chaudry—president of Veterans for Peace and WIP member—talked about the importance of “participatory” journalism.

Brian McCracken, who worked so hard in setting up this benefit, was the master of ceremonies, providing the glue and continuity. Brian charmed the crowd with his personality, some of his own works, and the occasional bad joke.  The audience loved him. For the novices he explained the process.  Eight contestants would begin in the first round, only five would go to the second, and the top three finalists in the third.

The contest began with Old Growth Poetry Collective member Richelle Selig as the sacrificial poet.  She set the standard for the volunteer judges to appraise the slam contestants and was a hard act to follow.

In the first round, we met and heard all the contestants, and the judges were cajoled if they weren’t quick with their scores. When it was over, it felt that it wasn’t enough to not hear at least one more poem from each of those eliminated.  We barely knew you…

The second round was just as hard.  There was time to connect with the poets, to know them.  The audience was more vocal in their support of the contestants.  It was more difficult to choose.

The final round with only three poets was much too short. We found ourselves whispering to each other, “Who knew this would be so much fun?”  Elizabeth Jetton was the winner with her poem, Latchkey Kid, and Molly Nagin and Peter Kirk Litster were close second and third.

The following also need mention because of their contributions to the event.

Eva Donjacour kept track of the judges’ scores as well as keeping the master of ceremonies on track.  She also donated a variety of home-baked goods for the refreshment sale (proceeds donated to WIP) and even peopled the table before and after. The treats were quite tasty.

Tamale Fusion—a delicious business in town located at Fertile Ground and vending at local events—provided tamales for participants and volunteers. Word is the business may expand it operation to selling its wares through the Olympia Food Co-op.

Honoring all who attended was Rachel Greene, another Old Growth Collective member, who collected money at the door.  (In case you haven’t heard her poem on fracking presented at a recent Port of Olympia commissioner meeting, you need to check it out YouTube.She is from Pittsburgh).

The event was a smashing success, thanks to all those who participated and donated, and to you, dear reader, for supporting our publication.

Jordan Beaudry has a pen in his pocket and a passion for social justice.

Sylvia Smith, a long-time WIP member, can’t imagine what life would be like without Works In Progress.