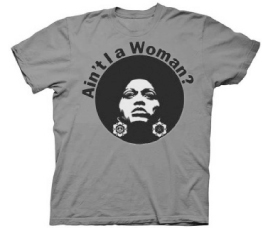 Ain’t I a Woman?—Reproduction and patriarchy: Hating women in presidential elections

I own a T-shirt that is almost 40-years old. I’ve kept it as a symbol of my feminism, of an idea that resists patriarchy and powerful old men, pandering to so-called, moral, constituencies. The quote on the T-shirt is about a woman’s body, my body; about a woman’s mind, my mind.

No country on this earth has created laws against men who choose to restrict their ability to reproduce; let alone define the legality of methods men choose about when and how they procreate.

In the United States, abortion was widely practiced before about 1880, by which time most states had banned it except to save the life of the woman. Anti-abortion legislation was part of a backlash against the growing movements for suffrage and birth control — an effort to control women and confine them to a traditional childbearing role.

The Republican candidate for president of the United States claims that he loves and respects women, yet he consistently demonstrates that he does not. He sees young, beautiful, women’s bodies as something to be consumed, taken, owned, controlled, defiled, denigrated, snatched and plundered. His contempt for women, especially those who may, can, will, become pregnant is, in these times, astonishing. So is his ignorance. It’s easy to see misogyny leaking out all over, like a tea kettle that’s boiled over and is now boiling dry.

This man says that he cherishes women and life so much that he will appoint U.S. Supreme Court Justices during his presidency who will strike down Roe v. Wade, because that will stop untold numbers of women from ripping babies out of their wombs just days before birth.  Apparently pregnant women are dangerous, like terrorists, and a threat to national security. (If we follow that logic, Hillary Clinton was at her most dangerous when she was carrying Chelsea in her belly.)

It is clear that the man knows nothing about pregnancy or the reasons women have abortions. Apparently he’s never heard of Cesarean Section—a method of delivering unborn babies during the last trimester (somewhere between 26 and 38 weeks)—via an incision through the belly to the womb. This method has been known since ancient times. There is no such thing as a partial-birth abortion. That would be like being partially pregnant—a woman is pregnant, or not; a baby is born, or not. There are very rigorous laws in place about abortion during the third trimester. According to the American Congress of OB/Gyns (ACOG) third trimester abortions are very rare, heavily sanctioned by law, surgery protocols, and performed only under the direst circumstances. In these situations, the baby is wanted and waited-for, but something goes terribly wrong. If something hadn’t gone terribly wrong, the baby would have been delivered C-section.

A typical woman’s pregnancy has a 38/39-week gestation period, broken into three portions, or trimesters:

Tri-1= approximately weeks 1-12 (when most women discover their pregnancy and then decide to continue the pregnancy—majority, or to have abortions – minority);

Tri-2= approximately weeks 13 – 28 (when the fewest number of abortions are performed, and when amniocentesis can show birth defects/abnormalities pointing to impending fetal death);

Tri-3= approximately weeks 29-38 (when most Cesareans are performed and when less than a fraction of 1% of abortions are performed, under very unusual circumstances, or to save the life of the mother. Most often the baby is not viable—if it were, a C-section would have been performed.

According to U.S. Center for Disease Control and Prevention data from 2012; and the Guttmacher Institute:

65.8 percent of abortions took place within the first eight weeks of pregnancy, and

91.4 percent occurred within the first 13 weeks. Lack of funds, time off from work and access to legal abortion providers brings this number up

Just 7.2 percent of abortions were performed between 14 and 20 weeks gestation (2nd Trimester), and many of these were abortions that could have been performed earlier if the patient had money, time, and access to abortion providers.

1.3 percent of abortions took place at or after 21 weeks pregnancy, and almost none after 24 weeks. The 3rd trimester begins at 29 weeks.

During the decade 2003 through 2012, the CDC recorded a significant shift toward earlier abortions, with the percentage occurring within the first six weeks up 24 percent during the study period. The percentage of abortions occurring at or after 13 weeks, meanwhile, remained relatively consistent and never rose above 9 percent. The overall rate of abortions also declined. The rate in 2011 was 16.9 per 1,000 women aged 15–44, down 13% from 2008. This is the lowest rate observed since abortion became legal in the United States in 1973.

Why women have recourse to abortion is also important

Forty-nine percent of abortion pahtients in 2014 had annual incomes of less than 100% of the federal poverty level ($11,670 for a single adult with no children). The most poor of all Americans. Reasons cited for abortion range from concern for or responsibility to other individuals, most often children, parents or siblings; and the inability to afford a child; to pregnancy and motherhood interfering with work, school or the ability to care for dependents. Half said they did not want to be a single parent or were having problems with their husband or partner.

That woman are by law or tradition around the world considered sexual objects, vessels to be impregnated, owned by men, and traded by them as commodities, is nothing new, but we have begun to move beyond this.

But not all of us have moved beyond as shown by one candidate’s statements: “No one loves women more than I do; I do own Miss Universe. I do own Miss USA. I mean, I own a lot of different things.” I do understand beauty; Beauty and elegance, whether in a woman, a building, or a work of art, is not just superficial or something pretty to see; it doesn’t really matter what they write as long as you’ve got a young and beautiful piece of ass; 26,000 unreported sexual assaults in the military-only 238 convictions. What did these geniuses expect when they put men and women together? Rape is only natural.”

I will choose what enters me,
what becomes

Flesh of my flesh. Without choice,
no politics,

no ethics lives. I am not your cornfield,

not your uranium mine, not your calf

for fattening, not your cow for milking.

You may not use me as your factory.

Priests and legislators do not
hold shares

in my womb or my mind.

This is my body. If I give it to you

I want it back. My life

is a non-negotiable demand.

Me, I’m gonna be buried in my Marge Piercy T-Shirt. I’ll vote for a woman who started her legal career working for The Children’s Defense Fund and who grew up in a religious tradition that was founded on these values: Do all the good you can, by all the means you can, in all the ways you can, in all the places you can, at all the times you can, to all the people you can, as long as ever you can; and who has always, always, stood her ground for woman and children, for health care, and for education. I’m going to hold her to those values so many of us share by supporting Green candidates and progressive Dems locally and regionally. The Prez? Gotta be Hillary and the progressive coattails Bernie promises locally, and in House and Senate elections.

Liza Rognas is an academic librarian and a research professional, and has been a community food security activist and researcher for 20 years in Washington State.