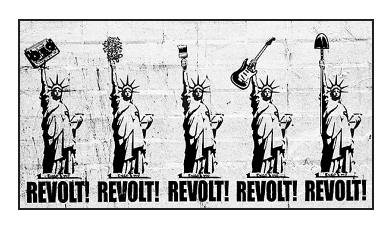 Actions of men and women in the greatest democracy in history

The actions of men and women, part 1

The Argentinian writer Jorge Luis Borges once stated that heaven and hell seem to be out of proportion because, according to him, the actions of men do not deserve so much. That may be case for divine justice ruling the afterlife, but when it comes to the national leaders we choose, we definitely deserve the political consequences of our actions. America, which according to Joe Biden is “The greatest democracy in the history of the world” has nominated, one more time, the bi-cephalous monster of corporate capital to rule the nation, under the illusion that choosing one of the two official talking heads, either a Republican or a Democrat nominee, is the best we can do, and it is the best American democracy has to offer. We have failed, one more time, to distinguish between what is truly beneficial to us, and what we have been told by others would be beneficial to us.

If Borges has it right, hell and heaven should be spared as consequence for our actions, political and otherwise; but in the mean time, either Clinton or Trump is about to happen, both which will perpetuate the current material conditions of inequality for most Americans, and this situation cannot be spared or ignored. It is certainly not ignored by the upper one to ten percent of the population which, given the national trend towards the concentration of wealth in the last few decades, expects to become even wealthier than before. This disturbing scenario of inequality belongs neither in heaven nor in hell—it lives here, in the social reality of the planet and the nation in which we live. This precarious situation is about to be legitimized, one more time, with the civil blessing of the vote of men and women cast on the holy altar of American democracy.

The actions of men and women, part 2

As things are now, electing Trump or Clinton in the fall has little to do with improving our chances to right the social injustices resulting from the current version of U.S. democracy. This government, in its latest form, finds itself wrapped in an aureole of foreign wars and the internal militarization of the economy and civil society, resulting in profound economic disparity and irrationality; lack of appropriate health care, social services, housing, and education; ecological irresponsibility and violence; and racism, mass incarceration and police violence, particularly directed against African American people. The greatest democracy in the history of the world indeed!

Ironically, at the same time, in the last decade we have witnessed the largest and more radical expressions of resistance and opposition to the current conditions of American capitalism. From the Occupy movement, to Black Lives Matter, from the national Council of Indigenous People (The Red Nation), to multitudinous marches demanding regulations on global climate change, culminating with millions—particularly young men and women—supporting the socialist democratic platform of Bernie Sanders.  All of these political occurrences combined express the constant germination of social discontent and an almost instinctive elucidation of better forms of struggle among the masses. They also express a different type of action executed by men and women, actions that seek to transcend the soporific banalities of the dominant political discourse. As Jordan T. and Christina Heatherton, editors of “Policing the Planet: Why Policing Crisis Led to Black Lives Matter” (Verso 2016) point out, this feeling and conviction about the importance of political transcendence is perhaps best captured by the last line of the Council of Indigenous People’s program: “ For Native peoples to live, capitalism and colonialism must die”.  The problem is, of course, how to expedite the extinction of capitalism through radical but still doable transformative measures.

The actions of Bernie Sanders

The two most important resistance and struggle movements that have emerged from the current crisis are Black Lives Matter and the movement agglutinated around the Bernie Sanders campaign, the former ultimately informing the latter in significant ways. Both movements have effectively addressed the problem of radical rhetoric and radical pragmatic critique of capitalism in their specific political platforms. In the case of Sanders, his call for a “Political Revolution” incorporated specific measures aimed at starving important policies, institutions, and structural power of the capitalist state. Among others: the abolition of income and wealth inequality, free college education, getting big money out of politics, establishing a minimum living wage, combating climate change, and taking measurable steps toward racial justice, fair and humane immigration policy, women’s rights, the creation of an AIDS and HIV-free generation, LGBT equality, Medicare for all citizens, and so forth. Part of Sanders success, I believe, was because his sympathizers understood his version of ‘democratic socialism” as altruistic, humane, and just, but at the same time attainable, and politically possible.

Through the very nature of their programmatic platform, Sanders’ supporters, and Sanders himself, up to the point of his endorsement of Clinton, managed to avoid the false dichotomy of class interests represented by Republicans and Democrats. To illustrate how the symbiosis of big capital is not exclusively located within the Republican party, Jennifer Roesch, writing for Jacobin, reports that a “poll of millionaires was revealing: Clinton leads the pack with 31 percent of millionaires supporting her”.

Sanders’ last action, his endorsement of Hillary Clinton, is based in his genuine fear about what Trump represents in his open displays of racism and bigotry. But as Roesch observes in the same Jacobin article, “if our side succumbs to panic about Trump, we miss the greater dangers we face. It is the “war on terror” carried out by a democratic president for the last eight years that has created the breeding ground for racism and terrorism. It is the devastating social and economic crisis wrought by austerity that creates the conditions in which right-wing scapegoating can seem to provide the answers.”

The actions of men and women, part 3

On Tuesday, November 8, 2016 men and women in this country will be in a position to decide whether their votes will be trapped within the logic of “lesser-evilism” or whether they will be able to transcend the two-headed, nearly Siamese twins of corporate America. In order to do so, we must continue working for an independent Left to transform this nation.  Heaven and hell may be out of proportion for our political mistakes, but the judgment of history will be hard to ignore.