About this Issue – Our Lived Values – February 2020

If we look around we can see a difference between values that are professed — and those we express in how we behave. But this is a moving target.

We don’t always have a free choice as to how we behave. For instance, someone might value family — including the opportunity to raise their own child as a stay-at-home mother or father. Low wages and the lack of paid family leave can make it impossible to live according to that value.

What if “family values” meant putting the interests of families and children above the needs of the workplace? In the US, if you’re a working parent, you’re on your own. Childcare programs — if they exist — are expensive, often with waiting lists and staffed by people with little training. As of 2018, 84% of private-industry employees had no paid family leave. Few states have laws preventing an employer from firing a woman during or after pregnancy. The average annual cost of daycare in 2017 was $9600 per child, which represented 37% of a single parent’s average income.

The Family Research Council defines “family values” as opposition to abortion, same-sex marriage — and support for a strong national defense. An increasing number of state legislatures have adopted this idea of family values, legislating restrictions on access to abortion and limits on gay rights exempting insurers from covering birth control—incorporating “Bible law” into their statutes. .

Contrast this with France, Denmark and a host of other European countries. They have enacted programs that provide government supplements during pregnancy, monthly allowances available to every family with children for the first few years. There are publicly funded programs readily available for the care of infants and toddlers for working parents. This is in addition to universal health coverage.

Candidates now running for President are bringing forward proposals that would make childcare more affordable — but little more. Whether these become law will help determine whether “family values” become part of our lives.

Our ability to live our values is also subject to evolving standards. Until recently, many Americans took pride in the words on our Statue of Liberty: “Give me your tired, your poor, Your huddled masses yearning to breathe free, The wretched refuse of your teeming shore. Send these, the homeless, tempest-tost to me, I lift my lamp beside the golden door!” These are no longer words to live by. Our elected leaders have banned everyone from seven countries and propose to ban people from seven more. For people coming from the south looking for safety and the chance to work for a better life, we provide detention centers, cages, armed border patrols. We deport long-term established people who never became citizens, leaving their children without parents and tearing communities apart.

There are other ways to deduce what values prevail among us. How do advertisers appeal to us? They offer more-for-less, short-term rewards, “safety,” convenience, novelty, speed and endless entertainment.

Would most of us choose those things if our world were structured differently? We might support laws and funds for livable wages, quality education, safe and functional public transportation, housing for everyone, integration of migrants into shrinking cities, renewable energy sources, green space—please add your hopes here.

Some stories in this issue touch on this question of what we value. Reflections on how the City went back on promises regarding the homeless; how volunteers at YWCA and the Food Bank collaborate to meet needs created by our failed economy; a sobering picture of train derailments in the context of the rail carrier industry’s search for greater profit by cutting back on all assets; contamination that undermines wetlands and communities; organizing to value farmland for its contribution to community and sustainable food production instead of its market-price—and other contributions by members of our community.

Is convenience destroying us? Deadline March 15. How much might the meaningful fabric of life and our own capabilities erode as we opt for convenience in more and more things? 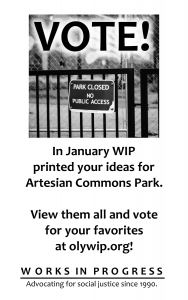 Update on the invitation to rethink the Artesian Well Park. We are still accepting more ideas, so send yours in. In the meantime, please let us know which of the proposals from the January issue you like. Go to the Artesian Park page on OlyWip and enter your views as a comment. Please note that WIP neglected to give credit to J. Digranes, who submitted the landscape design.

A constantly expanding number of companies seek to build pipelines through the territory of indigenous people, in order to deliver oil and gas from Canada’s tar sands. The Wet’suwet’en First Nation has opposed them in court, in the halls of government, and on the ground.

The values of the Wet’suwet’en people are in stark contrast to the values underlying the destruction of the tar sands to discharge yet more fossil fuel into the atmosphere. The proposed pipelines are a threat to the watershed, as well as the plants, animals and communities that depend on them.

“What indigenous people remember and Canada has forgot is that we have a sacred obligation to this land. As human beings, we all have a responsibility to that which gives us life. And as indigenous peoples who have safeguarded and stewarded these territories since time immemorial.”

“Our people’s belief is that we are part of the land. The land is not separate from us. The land sustains us. And if we don’t take care of her, she won’t be able to sustain us, and we as a generation of people will die.” —Freda Huson, Unist’ot’en Hereditary Spokesperson. For the whole story go to Unistoten.camp.

Next:
...at the last last minute, facing a statewide strike by…
← Community Events Spotlight — February 2020