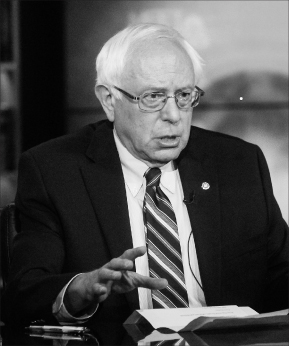 A senator named Bernie: A primer

Bernie Sanders is a self-avowed socialist and running to be the next president of the United States. Normally, this wouldn’t be worth the time to discuss but it’s notable because it looks as if he has a distinct chance of winning. To read the coverage of his campaign, the surprise may lead you to think he came out of nowhere but part of the reason he’s making such a splash is that for his whole political career he’s been saying what the American people finally seem willing to hear. Our electorate is waking up to the underhanded and insincere tactics that are so common in our political system, and they desperately want something different.

He’s been the junior Senator from Vermont for the past eight years and prior to that, he was the state’s sole delegate in the House of Representatives for sixteen. His entire tenure in politics has been as an independent and while he makes a habit of caucusing with Democrats, this is a reflection of his progressive ideals rather than any political allegiance. He doesn’t hesitate to speak up when he thinks a Democrat is in the wrong or a Republican is in the right—he’s far more interested in issues than personalities. Though he has been working with Massachusetts Senator Elizabeth Warren on legislation to help rein in the financial sector, Oklahoma’s Republican senator, James Inhofe, has called Sanders his “best friend in the Senate” and said “on a personal level, I like him”.

In a political landscape defined by complaining to the media rather than engaging the opposition with diplomacy, this dedication to bipartisanship is a breath of fresh air. Bernie demonstrates adeptly the difference between being populist and being popular.

For many, awareness of Bernie began in 2010 when he delivered an eight-and-a-half-hour speech from the Senate floor in protest of a bill to extend the Bush tax cuts for an additional two years. He took the opportunity to express a litany of complaints, framing issues such as the price of home heating oil in terms that reflected the concerns of his constituents. While there are times when many of his colleagues would likely enjoy being able to dismiss his firebrand approach to issues as cranky New England recalcitrance, he gets away with his politically dangerous rhetoric for more than just his friendly, affable nature.

He insists on framing issues in terms of how people are affected by them and evaluating policy based on its practical consequences. And more than just being fiercely independent politically, he also manages to avoid the influence of lobbyists by simply refusing their money. Salon recently gushed that Bernie “is perhaps the only politician in world history who’s ever said, ‘I don’t want money from the billionaires'”. These aren’t hollow words. When he talks about the problems in our country, he doesn’t hesitate to link labor woes to the Walton family and environmental problems to the Koch brothers or to point out that they are the richest two families in the country and citing greed as their primary motivator.

Bernie has made getting big money out of politics a central issue in his presidential campaign and has been fighting against the Citizen’s United Supreme Court ruling since it was handed down. Rather than making the usual fund raising rounds of presidential hopefuls, he has been travelling the country making stump speeches to crowds which are already attracting audiences of 10,000 people. And rather than the typical platitudes people have come to expect, he’s talking about income inequality, a living wage for workers, tuition-free publicly-funded college education and the environment. People aren’t just listening, they are opening their wallets to fuel one of the most impressive fundraising efforts in American politics.

So far this election cycle Hillary Clinton has raised $47.5 million. Bernie Sanders has raised $13.7 million which may seem disappointing by comparison. But while Hillary left the Department of State two and a half years ago to promote her book and chat with donors, Bernie has only started campaigning this year with a significantly lower profile. He’s also out raised all of the Republicans currently collecting for a presidential bid, although this is a little more complicated. Many Republican donors are taking a wait-and-see approach to this election cycle. Some are even signaling the possibility that they could end up backing the Clinton campaign, particularly those linked to the financial industry who are concerned about Republican candidates taking up populist anti-banking rhetoric. Their possible support isn’t particularly surprising considering Clinton’s banking friendly positions reflective of her years as the junior senator from New York and her largest contributions coming from the finance sector.

While campaigns are just getting started and it’s still a long way from anyone receiving the billions of dollars in contributions that are expected for this coming election, what really sets Bernie’s approach to funding apart is in the volume of donors. He’s received money from hundreds of thousands of individuals and is demonstrating that politics can turn on more than just the bottom line. In addition to packing rallies and making $40 donations add up, the Sanders campaign has received more than 100,000 requests to volunteer. This is largely a matter of stated intention as the campaign hasn’t begun coordinating at that scale, but it is truly a remarkable accomplishment. The Clinton campaign has signaled that it will begin shifting focus to small dollar donors however, Bernie seems poised to make irrelevant the fundraising gap that comes from rejecting super-PAC style politics.

What Bernie has shown is that a campaign is far less expensive to run if you have a message people will promote without being paid. The Clinton campaign has already had to dig deep into its battle chest and is outspending the Sanders campaign almost two-to-one relative to their respective fundraising totals with Clinton having spent more than Sanders has raised to date. And that doesn’t count super-PAC spending, which is far harder to account for.

This election cycle is already reflecting a radical shift in how American politics is conducted. What Bernie has shown is that the true cost of accepting corporate cash is in what a candidate isn’t allowed to talk about. Part of what Clinton has been struggling with is that all of the issues that are resonating most strongly with voters are topics her financial ties and past political activities prevent her from addressing. She can’t talk about aggressive reform in either campaign finance or banking. She’s been on the wrong side of gay marriage. And her time at the State Department puts her in a precarious position with regards to issues of surveillance and open government.

Perhaps her biggest weakness is something that should be her greatest political triumph. Back in ’93, health care reform was central to the national agenda and as first lady, she was tapped to head the effort on behalf of the White House. Bernie Sanders was in the House of Representatives at the time and put together a proposal to expand Medicare to cover all Americans based on the recommendations of two Harvard Medical School doctors’ analysis of the Canadian health care system. Hillary expressed in no uncertain terms that this was simply not an option she was willing to consider because of the influence of the insurance industry. After twenty-two years and three major attempts at reform, health care costs are still a serious topic of discussion. It’s going to be rather hard for her to debate an issue she has already failed to address effectively with an opponent who has been championing a better plan all along.

Bernie Sanders has made a career of prioritizing being right over being popular while showing that, at least in politics, it’s better to be likeable than rich. It’s a strategy which may well win him the presidency.

(In the interest of full disclosure, I too have used the form on the Sanders campaign website to indicate a willingness to volunteer. However, I have heard nothing from them aside from the regular campaign emails. Unless it’s stuck in my spam filter.)

Gabriel Withington is an artist, factotum and applied mathematician who writes computer programs for consulting clients when he’s not prattling away about social justice issues on Facebook.

Next:
Watching videos as a first step in changing our economy...…