A mother’s plea for justice 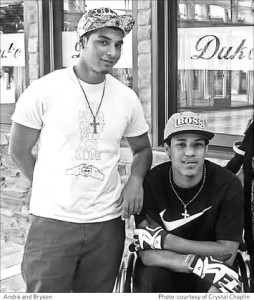 It was a nice day in May 2015.  It was dry outside and both André and Bryson decided they were going to the local skate park on Cooper Point Road. It wasn’t far from where we lived; they left late that afternoon.

That night, or should I say early that morning on May 21, my daughter came home saying someone had just been shot down on Cooper Point Road not far from our home. She was frantic asking if her brothers were home. “They hadn’t come home yet,” I said to her. We stayed up the rest of the night waiting for them to come home, but they didn’t.

Later that morning there was a knock on the door. It was detectives/police saying that both my sons, André and Bryson, were both shot in the chest by a police officer and were in critical condition. I froze; I can remember dropping to the floor. My heart felt like it was just ripped out of my chest.

I cried and I felt sick to my stomach.  I said, “God please don’t take them from me. Please.” What went through my mind then was why a police officer would shoot them? What the hell is going on?

We were told which hospital they were taken to. When we arrived at the hospital I was not allowed to go in to see my sons. An officer was there in the lobby outside the ICU wanting to ask my daughter more questions. After informing my family on what happened they advised me to stop talking to the police or media until we have legal representation. I immediately said, “no more questions. I want to see my sons right now.” They finally let me in after a few minutes.

Walking into that room seeing my youngest son unconscious and having all these machines around him—wires all over him and on a respirator to help him breath—was something I wasn’t prepared for. It was frightening and very overwhelming and then seeing a police officer sitting there all calm made me so upset. I wondered why he was there with his little pad writing things down. I still didn’t know exactly what had happened or if my son would make it. Doctors then said to me that he was stable but still critical.

I asked where was my other son. At first they didn’t seem to know where he was but finally we were told where he was, he was about 30-45 minutes away from St Peter’s. Before leaving to get on the freeway for the drive to Tacoma General Hospital, we made sure Bryson was stable.

I felt numb and so worried because now I’m going to see André and I wasn’t prepared for what I was about to see, I was scared and I just prayed “Please, God, please let him be still with us, please.” Finally making it to André’s room I was so happy to see him awake and I could see the pain and worry in his eyes. He asked how his brother, Bryson, was. I told him and he began to cry. My heart was breaking.

I kissed him, told him I loved him very much and said, “I will be back soon baby.”

Arriving back at St. Peters Hospital Bryson was still unconscious and being readied to be airlifted to Seattle Harborview Hospital. I stayed overnight with Bryson not leaving his side, talking to him saying to him I love you and saying, “Bry-Bry, open your eyes. Baby, fight. Baby, you’re strong. I’m here; Mommy’s not going anywhere.”

I believe it was the next day when he opened his eyes. Family had flown in from Rhode Island, Florida and California to be with us because this was just unbelievable. Nothing like this happens in our family. We would drive back and forth between hospitals until André was released a couple days later. My brother, my oldest son, my son’s father, my daughter and I would take turns staying with Bryson in the hospital because we didn’t want him to be alone; someone had to be with him at all times. The drive back and forth from Seattle was so stressful and overwhelming.

I was so afraid for André and Bryson. I still am ‘til this day.

Bryson is now paralyzed. He has a bullet in his back from the White police officer who opened fire on him and his brother. When I learned that he couldn’t walk and saw the x-ray that showed the bullet in his spine, I was angry that the police lied. They told me both he and his brother were shot in the chest.

And while in the hospital, after Bryson was airlifted to Seattle, I got a call from the Olympia police chief asking me how I was doing and saying he was sorry for what happened. He spoke some more, but I wasn’t really paying too much attention to what he was saying because I really didn’t want to hear what he had to say. I remember him saying to call him when I could because he would like to talk with me.

After about a month Bryson was released from the hospital. We tried to make it as comfortable as possible for him because he had to use a wheelchair. This has changed their lives, my life and our entire family’s lives. The media and ignorant people making nasty comments, saying my sons must be thugs or gang members, it’s just ignorance.

My sons are just sweet caring guys with big hearts.

After a couple months go by, the investigation is still going on. Then in August the investigation is completed with both my sons, André and Bryson, being charged with assault on this White police officer. He tried to kill them both and I truly believe the officer not only shot Bryson multiple times but he also wanted to kill André.

So there was no witness to his brutal and reckless act on two young Black men. This killer cop said my sons tried to attack him with a skateboard.

They are also being charged for assault on the store clerk who has claimed they had attempted to steal beer from the store.

This so-called police officer saw two suspects fitting the description from what this store clerk had given them, and from that my youngest son was hit with bullets multiple times and my other son was shot at three times and hit once.

All my life I have never heard of a police officer going after anybody that had attempted to steal beer or even a store clerk or owner who called 911. Usually it’s the store manager saying to a person or persons never to come back in their store. Wouldn’t you think that would be more logical? But instead two young black men, my sons, get gunned down with bullets flying everywhere.

When I heard the charges I was livid and saying “Is this for real; are they really serious? This can’t be happening.”

First court date was nerve racking. The media was outside and inside the courtroom. It felt like we were all going to a hanging. Then there was silence because I don’t think the media and people in the community didn’t really believe my son Bryson was paralyzed and in a wheelchair, but they see now.

I feel we are trapped here in Olympia and all I can see, when I go places or into that court room, is racist people. I have so much anxiety when I see a police car or an officer and every time we drive down that road. I picture my sons running through the woods trying not to get hit by bullets as this White cop fires into the darkness, into the dark woods.

Every day since Bryson and André came home from the hospital I see the pain in their eyes and I see the physical pain Bryson goes through. Every day I wish I could take it all away; I feel helpless.

Where is the justice? So many men, women and children have been killed by police officers all over the United States. When is this going to stop? When is change going to come? I thank God every day for my sons being alive and I pray every day for the mothers and fathers, sisters and brothers who have lost a loved one because of police brutality.

Looking back through history it seems like it’s happening all over again and everyone is just blind to what’s really going on. The police take care of their own “White privilege.” That’s how I see it and I’m sure other people see it, too.

As I write these words, with tears in my eyes, my chest is so heavy and it aches like I’m living that day again when I was told my boys were shot. I live this every day. A mother should never have to hear those words or even be told that their child has died. My heart goes out to the families that have lost a loved one to this madness. My family will never be the same again; my sons will never be the same again. I want justice for my sons, Bryson and André. The police officer should be held accountable for using excessive force, for attempted murder, and never be able to work in law enforcement or carry a firearm again.

I truly think that all police officers who have killed should be stripped of their badges and guns never to get them back again, ever!

Many people have asked me how I’m doing or how I’m feeling. Looking at my sons I cry inside every day. They didn’t deserve what happened to them. I cry in private because I don’t want them to see my tears, I was protective of them before and now I am overly protective. I trust no one around my family, especially my boys. Before all this happened, we were trusting people.

Our lives have changed forever since that White officer tried his hardest to kill my sons, but God had other plans for my boys. He sent down his Army of Angels to protect them as they ran through those woods in the darkness for their lives; I am so grateful for the Angels. My experience as a mother with two black young men, my sons that survived and lived through this traumatic incident, I can truly say I am blessed to have them still with me. If it wasn’t for the work of God and his Angels I would be mourning both my sons. I can only imagine what they went through that horrible night on May 21, 2015. That day will forever be etched in our brains and hearts.
Justice for André and Bryson.

Crystal Chaplin is a single mother of 4—3 sons and a daughter—and  grandmother of 11. She grew up in New England in a Rhode Island town  called Woonsocket and her family moved to Olympia in 2012. Crystal is a dedicated mother and gives her all for her children and grandchildren. “They are my life.”

Next:
Claiming to have God on your side can be philosophically…