Caring for the whole community

If there is anything that COVID-19 has shown us, it’s that building real-world models that allow everyone to thrive via strong community safety nets is imperative in an economy that requires human beings to properly function.

Founded after the 2016 election, Elevate Mason County (EMC) is one such model. The group works “to make Mason County a sanctuary for all people who call the community home; to feel safe, welcome and hopeful for the future.” Very grassroots, Elevate is an all-volunteer coalition of Mason County residents with a diverse set of experiences. They range from non-profit and government professionals, to artists, teachers and many others. 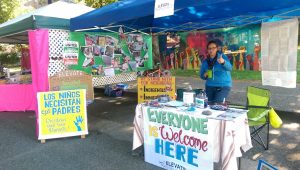 These volunteers focus primarily on solidarity with their local immigrant community and strive to live their anti-racist principles at every level of organizing, leading from lived experience with poverty, immigration and marginalization.

Historically, Elevate has provided community events, gathering spaces and educational talks around local issues; held marches and created campaigns in support of immigrant neighbors and their rights; and worked on signature gathering for De-Escalate Washington. These projects over the past 5 years allowed them to build deep relationships across multiple community organizations and institutions.

The initiative focuses on flexible financial assistance for immigrant and refugee neighbors at the margins of the COVID crisis.

Before the pandemic, we were all witnessing an economic crisis nationwide and on-going destabilization worldwide. This led to significant displacement of indigenous people from ancestral lands, including those that lie within Guatemala and Mexico. Many people from affected communities in Todos, Santos, and San Pedro Saloma, Guatemala now live, work and pay taxes in Mason County.

Current conditions for this community exemplify an intricate web of economic failure. Lack of a social safety net, vast economic injustices, and a framework of meritocracy are all the result of a pervasive neoliberal system spanning half a century. Neoliberal policies perpetuate environmental racism, health disparities, food and housing insecurity and numerous other barriers to thriving communities.

Mason County is disproportionately impacted by these challenges with a poverty rate of 15% compared to 9.8% across Washington, and with immigrant families in the county 29% more likely to be in poverty. This shows up as food and housing insecurity and lack of access to medical care, childcare, and transportation.

The effects of neoliberalism and austerity measures have also been exacerbated by COVID-19. When the US federal government issued COVID-19 relief checks, mixed status and undocumented neighbors were overlooked. Mason County immigrant workers in shellfish harvesting, the service industry, and special forest products all faced an economic downturn in the pandemic. They lost work, faced higher virus risk and yet received no public financial support. It was this lack of support in the face of new hardships with disproportionate impacts that generated a response from Elevate.

The Immigrant Relief Fund (IRF) is an Elevate-run initiative built on a foundation of mutual aid, interdependence, commitment to community, and trauma-informed, relationship-based practices.

The initiative focuses on flexible financial assistance for immigrant and refugee neighbors at the margins of the COVID crisis. Currently, the IRF is made up of a group of Elevate members acting as the bridge to get needed emergency funds out into the community and to increase capacity for emergency fundraising efforts.

IRF members credit their success at fundraising to their intentional, trauma informed approach. Before beginning to raise any money, they spent significant time building relationships and strong processes for distributing funds. They worked with advocates on the ground who identified and worked with families in need in dual language to access funding. They also formed partnerships with multiple non-profits who sponsored specific components of the project.

Advocates from Sound Learning, CIELO, Shelton Schools’ Student and Family Support Center and the school’s bilingual homeless liaison know the needs in the immigrant and refugee community. Local organizations heard heart-wrenching stories of struggle due to COVID shutdowns and later COVID infections. The Immigrant Relief Project has raised nearly $90,000 to date, and is set to begin a second round of grassroots fundraising. Distribution decisions remain in the hands of direct advocates and organizations serving the community through IRF’s structure. The money raised will go directly to individuals and families within rural Mason County.

Last Spring, Elevate members seized an unexpected opportunity to partner with Leading from the Roots (LFTR) on a two-phase grant project. This accelerated the fire already started by Elevators (as they call themselves). The Leading from the Roots grant, sponsored by the Folk School Alliance, was launched through a Community Based Participatory Action Research project to document “community members coming together, seeking to define the needs of their own communities, and then doing something about it.”

In Phase I of the project, IRF was provided a $5,000 match grant towards a GoFundMe that attracted small donations to build an initial $14,749 fund. This money supported 48 families with $300 each throughout Summer 2020. Phase II of the LFTR project maintains the focus on movement building through art and storytelling. The second half of the grant funded the creation of a short documentary by Zephyr Elise, a local film-maker about the project, plus a series of movement graphics created by local artist stacie gilkeson. The media and artwork will be used to create a joyful movement and tell an important story, and will be given as gifts for community donations to the fund.

The initial project faced some challenges—though community generosity wasn’t one of them. When they unexpectedly raised almost $15,000, the group had to figure out how to steward community funds without creating a tax burden for any one member, most of whom are working class themselves.

Once again, Elevate and the IRF called on their strong community relationships to solve the problem. Currently, the IRF is working on building a process to support Phase II of the Leading from the Roots project with Olympia POWER (Parents Organizing for Welfare and Economic Rights), an organization that emerged from the national welfare rights movement of the 1960s, which has worked for years to support grassroots groups fighting for economic justice.

Meanwhile, Elevators heard about a significant effort by All-In Washington and the Seattle Foundation to provide support to immigrant and BIPOC communities across Washington. With the help of Community Lifeline, a not-for-profit whose contributions are tax-deductible, the IRF was ultimately awarded $75,000 in grant funding through the Seattle Foundation.

While Elevators have immense gratitude for this huge capacity builder which will support over 200 families beginning in 2021, members often talk about how their work isn’t finished. They know the need is much greater than current resources. They also know that what they are doing is as much about building opportunities for community care as it is about fulfilling specific needs. That’s why IRF has a goal to raise on-going local funds that will permit neighbors to be proactive about taking care of one another.

Elevate, local advocates, and the wider community want to keep showing up in every way possible, and will keep relying on intentional work to do so. What Elevators have discovered and folks around the country are beginning to see is that resilience within current systems will be created through our relationships to others. By forming durable partnerships across the community, Elevate has been able to build a significant support network in a rural county with limited resources.

Amanda Eichelberger is a community organizer based in Shelton, WA, focused on social, economic, and climate justice.

To learn more about Elevate and check on the launch of Phase II of the Leading from the Roots project go to www.elevatemasoncounty.org.